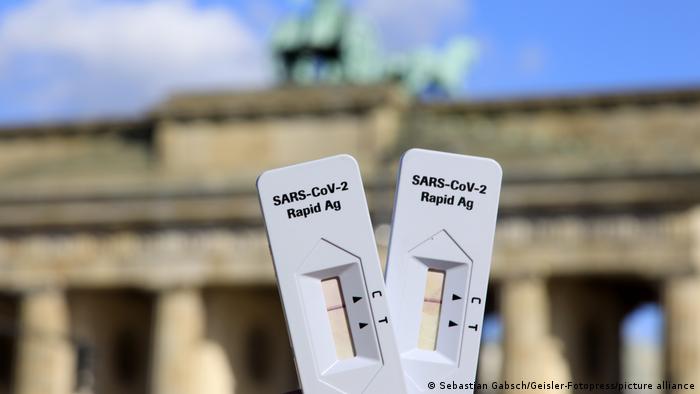 Last May, on a perfect spring evening, Germany gradually and cautiously lifted its first coronavirus restrictions. I headed to the pub with my flatmates for the first time in over two months. After seeing a picture of our enormous beers and smiling faces, a friend back home in locked-down Scotland sent me a message: "I wish I lived in Germany right now!"

It was an odd, mixed feeling familiar to many immigrants in this country last spring and summer. Of course, we were scared and worried about friends and family back home, and at the same time alarmed by those several thousand who lost their lives or were seriously ill here in Germany. But it was all tinged with a certain complacency.

During that first wave of the pandemic, as countries like the UK and the United States saw cases and death rates skyrocket, a small, smug part of my brain couldn't help but think: Well, this is all terrible, but I've certainly picked the right country to live in.

A safe pair of hands

Back then, Germany had a lower death rate than many other European countries. Restrictions were tight but never as intense as in countries like France or Spain, and initially they seemed to be working. The short-term work scheme meant that I did not know anyone personally who lost their job or faced major financial losses.

And Chancellor Angela Merkel, a scientist by training, seemed a far more reliable pair of her hands to have at the wheel when compared to the tousle-haired masculine bluster of her counterparts in the US and the UK.

Things took a turn for the worse as winter arrived. From October, cases and deaths began to rise dramatically in Germany as elsewhere. But even then I remained confident.

Dangerous virus mutations were popping up everywhere, but Germany was controlling the borders, right? And heck, the first widely-approved COVID-19 vaccine had even been developed right here — by a couple of immigrants, no less!

However bad things got, I was sure I was safer here than I would be almost anywhere else in the world.

Now, at the beginning of April 2021, this feeling is just a distant memory. Germany has floundered and pussyfooted both in terms of poor decision-making about restrictions and with the vaccine roll-out. It has become painful to watch the news — but I cannot take my eyes off it.

I watched as the government reopened schools and allowed more people to go into offices, while at the same time keeping theaters, restaurants and museums closed. I watched as thousands of German tourists took off to Spanish and Greek islands, with not so much as a quarantine requirement on their return. I watched as Merkel and the 16 state premiers squabbled until 3 a.m. to agree on a five-day Easter hard lockdown — which the chancellor then canceled, apologized for, and admitted was a "mistake" in a dramatic U-turn.

And I watch as my parents in Scotland — both under 65 and healthy — confidently expect their second vaccine dose in a matter of weeks. I watch as some German states, despite backlogs and delays, take a break from vaccinating over the Easter weekend. I watch as the United States celebrates 100 million vaccine doses: far more than the entire population of Germany.

I am past the point of looking for explanations, however rational they are. There are a plethora of excuses that can explain the current failures: that Germany's bureaucracy and inflexibility are its own downfall; that a lack of digitization has been the main stumbling block; that the federalist system is at fault; or that EU regulations have been the hindrance.

Any and all of these views could be true. But, for me and many immigrants like me — all I feel is disappointment. Naively, I thought Germany could be a beacon of hope in this pandemic. Not just because of the country's much-touted efficiency, but also because it is a progressive, modern place. Sort of like a friend you can rely on in a crisis.

But in this crisis, Germany has let me down.