A staffing shake-up has revealed that German Chancellor Angela Merkel can no longer organize majorities in her own ranks. The chaos is threatening an early end to her government, says DW Editor-in-Chief Ines Pohl. 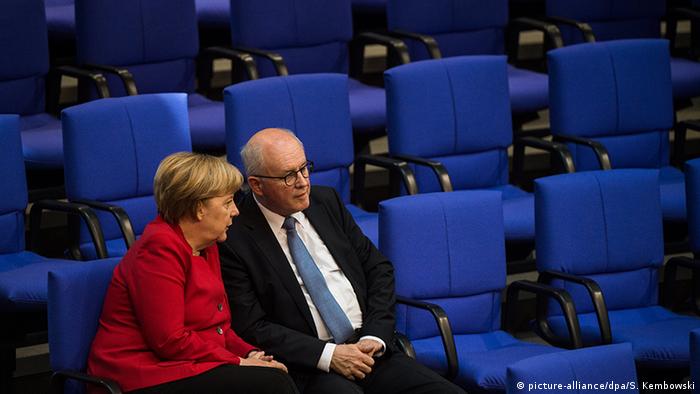 Parliamentary group leaders are most successful when their work gains little public attention. In the German political system, they are responsible for organizing majorities within their party for their respective leaders. If the party leader happens to also be the current chancellor, they ensure the head of government can do their job with as little friction as possible. Theoretically.

But nothing is running all that smoothly in Germany's current federal government. The lengthy coalition talks were accompanied by intrigue, resignations and the ever-present threat of new elections. And now, almost exactly one year to the day after the federal election, it's only a matter of time until the ruling coalition crumbles and Germany has to go in search of a new government.

It's not only because the governing parties quarrel with each other like cats and dogs, nor because they have lost their remaining credibility with the public over the course of their internal power struggles.

Now Angela Merkel has lost the majority in her own camp. Her longtime confidant and parliamentary group leader, Volker Kauder, has been voted out of office in a palace revolt that can only end in one way: new elections without Merkel — the woman who has shaped the fate of Germany and Europe for the last 13 years.

The fact that the election of largely unknown financial expert Ralph Brinkhaus coincided with US President Donald Trump's speech at the United Nations, where he yet again verbally attacked Germany , casts a particularly bizarre light on the state of Europe's largest economic power.

Too many members of the current German parliament seem like they haven't grasped the gravity of the situation. The citizens chose them to work for the good of the country — not to suspend government for weeks to argue about trivialities and details, further strengthening the right-wing populist Alternative for Germany (AfD) party.

Dismantling the only reliable leader

From day one, this federal government lacked a common political project and, above all, prominent figures of the caliber required to responsibly lead Germany in these difficult times. The only reliable leader among them was, until this historic Tuesday, Merkel. It was she who had obfuscated the deep divisions in the governing coalition and in her own ranks.

And now it's over. The members of her conservative Christian Democrats (CDU) and their Bavarian sister party, the Christian Social Union (CSU), have not only voted Kauder out. In these shaky times, they have publicly damaged the chancellor. So the question now is not whether Merkel's end is imminent, but only how fast it will be upon us.

That's striking — and not just because it makes the AfD and Trump very happy.

Philippines: Ferdinand Marcos Jr. sworn in as president 3h ago