Opinion: Empty stadiums are illogical but football is a populist pandemic punch bag

While pubs, restaurants, theaters and opera houses operate at full capacity, German football is effectively taking place behind closed doors. DW's Matt Ford says the game and its fans are being made scapegoats. 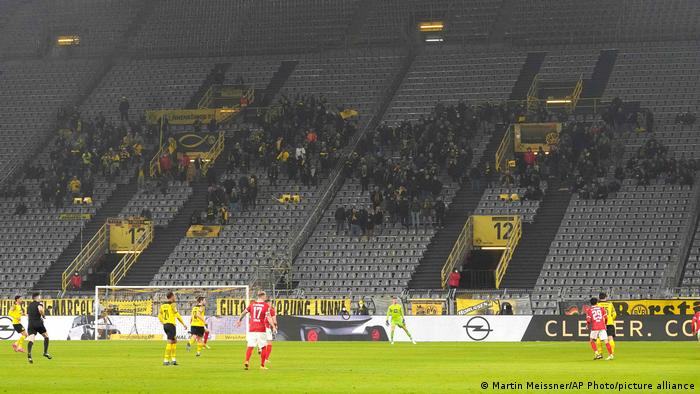 Borussia Dortmund were only able to welcome 750 fans for their game vs. Freiburg

All across Germany, football stadiums are operating at limited capacity or entirely behind closed doors in response to rising COVID-19 rates.

On Friday night, for example, at Borussia Dortmund's 83,000-capacity, only 750 fans were present as their team beat Freiburg 5-1.

Everything else, however, is open. In fact, at the same time as a couple of hundred Dortmund fans were huddled outside in the cold on the usually pulsating "Yellow Wall," the famous Elbphilharmonie opera house in Hamburg was operating at almost full capacity - indoors.

And many of the other 82,000 football fans who would normally have been sat outdoors at the Westfalenstadionwere instead watching on television in pubs — indoors — with the same absurd scenario repeated in cities across the country.

It's a thoroughly illogical situation that is costing football clubs millions of euros per week and yet doing nothing to stem the rising tide of infections — quite the opposite.

Back in November, there was outrage after a Bundesliga derby between Cologne and Borussia Mönchengladbach went ahead in front of a 50,000 capacity crowd. "We can't have images like that again," said Hendrik Wüst, the state premier of North Rhine-Westphalia (NRW), where Cologne is located. "It's not a good signal," commented Bavarian state premier Markus Söder.

Yet, in the weeks that followed, the city of Cologne confirmed that hardly any COVID-19 cases had been traced to the derby, but rather to indoor events such as private parties, club nights, a basketball match and an elderly care home.

That's no surprise. The match took place under "2G" conditions, meaning that the 50,000 attendees were all vaccinated or recovered.

It took place in the open air and, just like at other Bundesliga games, which this reporter has attended personally, the relevant documentation was strictly checked at checkpoints outside the stadium — stricter than in any other areas of life.

And you would expect the checks to be strict; clubs have a financial interest in fans being able to attend safely.

Full stadiums are a positive signal

Two months later, with over 70% of Germany's population double-vaccinated and the booster rollout also gathering pace to ensure that coronavirus infections remain mild and hospitals not overstretched, there is even less justification for capacity restrictions.

But football clubs and football fans are being punished again because full stadiums "send the wrong signal." It's a purely symbolic and populist argument, and it doesn't stand up.

On the contrary, full football stadiums are absolutely the right signal, a signal to that small and increasingly aggressive minority who still refuse to get vaccinated that doing so enables a return to normality.

Why should football fans who have acted responsibly, adhering to lockdown measures and getting themselves vaccinated, now pay the price because politicians have failed to get a grip on the situation?

Because the outdated and unfair image of football supporters as irresponsible continues to persist.

Football is not perfect, but not to blame

At the start of the pandemic, football was accused of getting special treatment when the Bundesliga was allowed to restart, allegedly taking vital testing capacities away from medical services — none of which was true; the clubs produced and implemented a sophisticated hygiene plan at their own expense and many have since set up vaccination centers at their stadiums.

Nonvaccinated footballers have been blamed for encouraging anti-vaxxers, despite the fact that,as undoubtedly irresponsible as Joshua Kimmich was , only 86 out of the more than 1,000 footballers in the top divisions remained unvaccinated by the end of 2021, as outgoing DFL head Christian Seifert told Süddeutsche Zeitung.

As for the irresponsible fans, they were the first to call for the Bundesliga to be put on hold in 2020 and the first to provide assistance to vulnerable groups in society. And when it comes to greed, commercialism and corruption in football, the fans are its biggest critics.

They don't deserve to be locked out of stadiums while operagoers attend the Elbphilharmonieand other cultural institutions remain open. But they're an easy target for politicians who have otherwise failed to get a grip on the pandemic.

Football stadiums across Germany will once again restrict access to spectators as the country copes with another coronavirus wave. Borussia Dortmund vs. Bayern Munich will take place in front of just 15,000 fans.

"Get a vaccine, get a booster, that's how we get out of this crisis," Chancellor-designate Olaf Scholz urged German citizens. Outgoing Chancellor Angela Merkel says she is in favor of mandatory vaccinations.

US: Lab monkey missing in Pennsylvania after road crash 6h ago