As the Bundesliga pursues plans for a May restart, it faces opposition from an unexpected source: fans. For many matchgoing supporters, the coronavirus crisis has revealed fundamental flaws in the modern game. 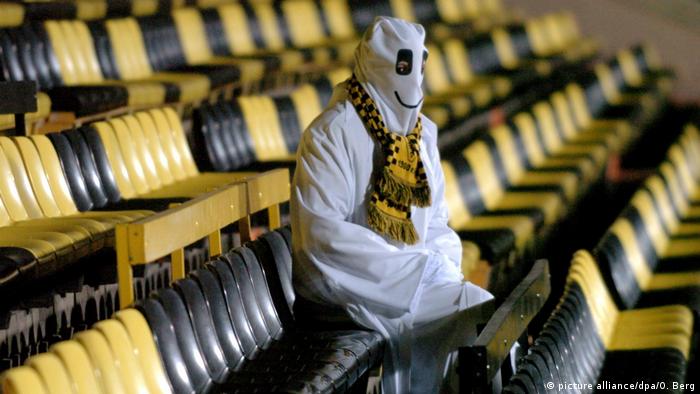 It was an email to Schalke season-ticket holders that set alarm bells ringing and made it clear just how precarious the current financial situation is for many Bundesliga clubs.

"Regardless of what decision is made, the club is facing a potentially existential economic threat," the statement read, referring to the ongoing uncertainty surrounding the continuation of the Bundesliga season. In order to stabilize the club's finances and help it survive, it also requested that fans not demand refunds for Schalke's remaining home games.

According to football magazine Kicker, 13 of the 36 clubs in Germany's top two divisions, the Bundesliga and Bundesliga 2, could be facing insolvency this summer should the season not resume. That is why the German Football League (DFL) is investigating the logistical and medical feasibility of completing the season behind closed doors, beginning in May.

The politicians will have the final say, of course, and the powerful minister presidents of Bavaria, the largest of Germany's 16 states, and North Rhine-Westphalia, the most populous, this week signaled in an interview with tabloid Bild that such a plan was "conceivable" under certain conditions.

Yet despite matches in empty stadiums, known as "Geisterspiele" (ghost games) in German, being seemingly the only way to guarantee the immediate survival of some clubs, the plan has prompted mixed reactions among supporters. 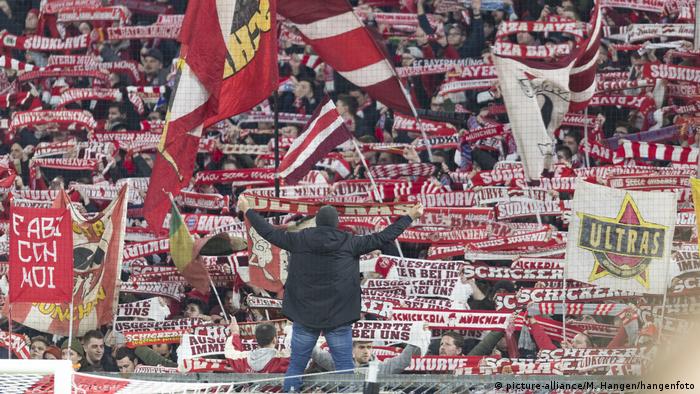 Bundesliga ultras are against holding games behind closed doors.

"There is a broad spectrum of opinions," said Michael Gabriel, who coordinates Germany's Fan Projects, a network of pedagogical organizations which work closely with young football fans and ultras across the country. He said that the prospect of games without spectators puts hardcore fans in an unenviable position.

"The fans see themselves as an integral component of the game, and the idea of not attending matches is one of their deepest worries," he told DW. "But if their club's existence is at stake, it becomes very difficult and many are torn because, without the clubs, there are no games."

Earlier this month, a survey commissioned by public broadcaster WDR found that 52% of people in Germany would be in favor of a restart behind closed doors, with only 30% against.

But bodies representing active, match-going supporters have made it eminently clear where they stand. Fanszenen Deutschlands, a nationwide coalition of active fan groups, including many ultra groups, released a statement last week stating that "ghost games are not a solution," calling instead for fundamental changes to the structures of the game.

"The resumption of football, even behind closed doors, is not acceptable in the current situation," the statement read. "Professional football is already sick enough and belongs in quarantine." 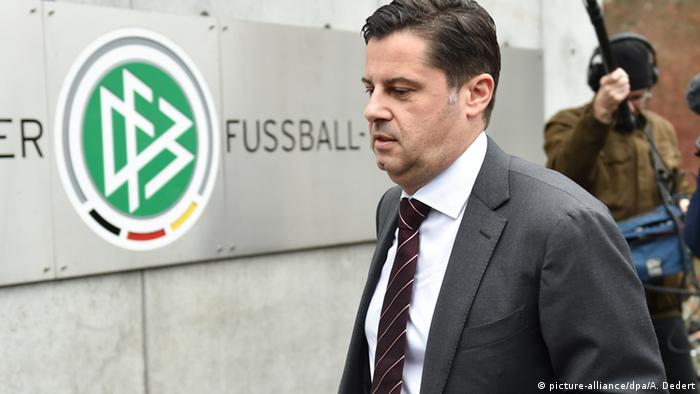 Speaking to the New York Times recently, DFL chief executive Christian Seifert suggested that Bundesliga matches could be staged with as few as 240 people inside stadiums, while experts have estimated that up to 20,000 coronavirus tests would also be required.

"It won't be the case that one doctor or one nurse cannot be tested because football players have to be tested," Seifert said.

Fritz Keller, the president of the German Football Association (DFB), insisted in a column in Kicker magazine on Monday that "football is not demanding special treatment."

But that is precisely what supporters think the game is doing, while also warning that so-called ghost games set a dangerous precedent.

Dependence on television money and investors

Aside from the ethical considerations linked to a resumption of top-level football while the rest of Germany remains under lockdown, fans are even more perturbed by the apparent lack of financial sustainability which has left the game in such dire straits in the first place.

"Professional football clearly has much deeper problems," Fanszenen Deutschlands said in their statement. "A system which for years has been swimming in sums of money beyond the comprehension of many people finds itself on the brink of collapse within one month."

Read more: How the coronavirus forced Germany’s next football star to wait for his chance

For Jost Peters, a spokesperson for Unsere Kurve, an interest group representing active football supporters, games behind closed doors are the "symptom of a disease," not a cure.

"What has driven the clubs to manage their finances the way they have, with no reserves and no sustainability?" he asked in a conversation with DW. "The clubs have made themselves dependent on television money and investors. The responsible organizations have never asked critical questions of their business model or of the crisis they now find themselves in. They only ever think of the next, small step while avoiding a discussion of the actual causes."

Criticism of football's economic model is "unanimous" among supporters, whether they're for or against ghost games, said Fan Project chief Gabriel, although he does recognize the need to address the immediate issue of imminent insolvencies.

"There is a broad consensus that the industry has acted irresponsibly and unsustainably," he said. "It's understandable that the DFL and the clubs want to rescue the current situation whatever way they can, but at the time you can see how fragile everything is.

"We have to differentiate between the short-term necessity and a long-term improvement. The two are linked: if we don't solve the current problem, long-term strategies are pointless."

Many German fans, particularly those supporters who are actively engaged in the game as voting club members or members of fan clubs or ultra groups, see the current crisis as confirmation of problems they have been highlighting for years. Those include corporate interests, threats to the 50+1 rule, matches on Mondays, all problems fans see as evidence of the rampant over-commercialization of football.

From a fairer distribution of television money among the clubs to stricter league licensing procedures to ensure that clubs are economically sound, the fans have enough suggestions of their own, but all insist that supporters themselves must be involved at some level.

"Fans must be included, and they must be provided with transparent and trustworthy information regarding the inner workings of their clubs," said Gabriel. "Then it would be easier to create acceptance for matches behind closed doors."

"There is no sustainable solution without the fans," added Peters of Unsere Kurve. "The first step on the road to recovery is recognizing that there is a problem. Football needs to get healthy again."

Germany's Handball Bundesliga has called off the remainder of its season, crowning the current league leader champion. Meanwhile, two of Germany's top footballers have teamed up to support local businesses. (20.04.2020)

The coronavirus crisis has wrecked football leagues around the world. But in Colombia, the women’s game fears discrimination has also been at play, with male players not seeing the same financial cuts. (17.04.2020)