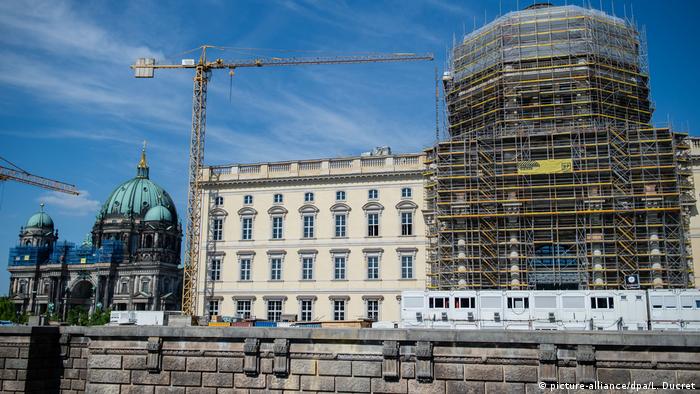 The Humboldt Forum in the rebuilt Berlin Palace will not open in stages throughout 2019 as planned. Important technical issues remain unsolved in the reconstructed residence of the Prussian kings that was destroyed by the East German government in 1950.

Petra Wesseler, the head of the Humboldt Forum Foundation in the Berlin Palace (SHF), and Hans-Dieter Hegner, the president of the Federal Office for Building and Regional Planning (BBR), today provided feedback about the state of the construction work. They concluded "that it is not realistic to expect to have the building ready to use as planned by the end of 2019," according to a statement by the Humboldt Forum Foundation.

Contained within the new Berlin Palace — built with a budget of €600 million euros ($679 million) —  the Humboldt Forum was to gradually open as a museum and cultural center starting from late 2019.

The main tenant in the Forum will be the Prussian Cultural Heritage Foundation, with its museums focused on world cultures, anthropology and ethnology — including an Ethnological Museum whose collection has been surrounded by controversy due to issues over provenance and colonial art restitution; while the State of Berlin and Humboldt University will also be given space.

After the Forum received its first large exhibit last June, many international museums decided they were not ready to lend the some 150 items requested by the foundation, due to the fact that the building was still a construction site.

Several exhibitions have now been postponed, including one on the subject of ivory, which will not be staged before the spring of 2020.

Another exhibition encompassing Berlin's "eventful history over the last 100 years," which was recently postponed until February 2020, will now be further delayed. Among the show's planned exhibits is the original door from the storied Tresor nightclub that opened in former East Berlin, shortly before the reunification of Germany.

Read more: Berlin 'resurrects' its controversial Palace of the Republic

In January, the Prussian Cultural Heritage Foundation had declared that the Humboldt Forum would definitely open in November 2019, just in time to coincide with the 250th birthday of explorer and researcher Alexander von Humboldt, in Berlin. The Humboldt Forum will instead be celebrating the 251st birthday of its namesake.

But if the constant delays to the opening ill-fated Berlin Brandenburg Airport is anything to go by, this may not be the first postponement.

Previously, the general director of the Humboldt Forum, Hartmut Dorgerloh, declared that 40,000 square meters of usable space could technically be put into operation by September. This deadline has now been delayed by at least six months, with the BBR due to submit a new concept, and one assumes associated deadlines, to the SHF Board of Trustees on June 26.

Opposition parties have slammed plans to put a cross on top of the rebuilt Stadtschloss, or City Palace, in Berlin. The Greens and the Left party say the plan endangers the open cultural dialogue intended for the site. (20.05.2017)