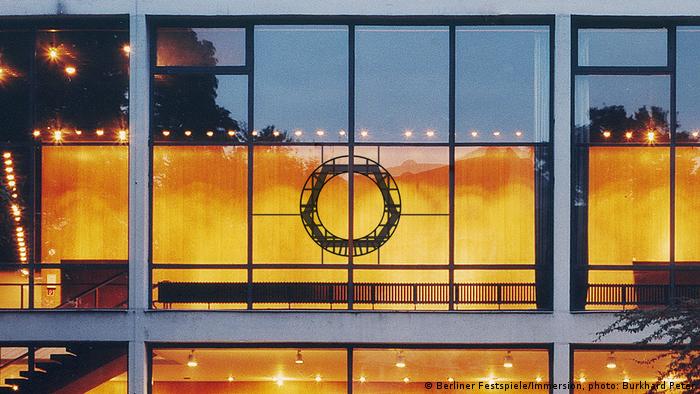 It all started when the team of Berliner Haus der Festpiele noticed that the windowed facade of their West Berlin theater could easily be transformed into a symbolic replica of the Palace of the Republic, the demolished building that served as the seat of the parliament of the socialist German Democratic Republic from 1976 to 1990.

That led the theater's curators to develop an immersive three-day project, called "Palast der Republik," for the building that inspired it, that combines talks, films, performances and music and reflect on the legacy of the events following German reunification. The project runs from March 8 to 10.

Organizers explained that the idea is by no means to glorify the former East German seat of government, which no longer exist. For instance, the emblem on the front of the building was modified; instead of reproducing the palace's socialist wreath with a hammer and sickle, a hexagonal logo was created to refer to the shape of the theater's main hall. 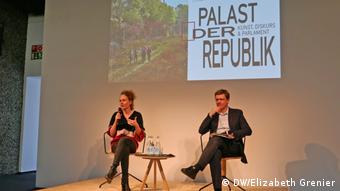 "This is not a nostalgic project, but rather, an attempt to read history differently, to talk about the East and West and envision a reform agenda for the future," said Berliner Haus der Festspiele director Thomas Oberender at the press conference ahead of the event.

A building with a charged history

November 9, 2019 will mark the 30th anniversary of the fall of the Berlin Wall. The Berlin City Palace, housing the Humboldt Forum museum, is set to open to the public later in the year.

Once the construction of the building is completed, tourists visiting Berlin's famous Unter den Linden boulevard will barely notice that the location, marked by different palaces, has been the focal point of ideological shifts throughout the past century.

Berlin's original 15th-century City Palace, or Stadtschloss, was severely damaged during World War II. Even though it could have been salvaged, the new socialist government viewed it as a symbol of Prussian imperialism and decided to demolish it in 1950.

Along with its parliamentary functions, the Palace of the Republic housed various cultural events, art galleries, restaurants and a bowling alley — was built in its place in the 1970s.

Following German reunification, the Palace of the Republic was closed to the public as the building was contaminated by asbestos.

The German parliament then decided in 2003 to demolish it, and to reconstruct the former Berlin City Palace — a controversial decision that had many opponents.

Today, no matter how one feels about the new building, the successive series of demolitions and constructions directly mirror Berlin's contemporary history.

The "Palast der Republik" event, however, goes beyond looking into the meaning of this vanished architectural space.

It will also revisit ideas that were quickly set aside once East Germany was incorporated into West Germany.

Today, the rise of the far right in former East German states too often makes headlines, which is why the curators of the event feel it is time to revisit other aspects of the GDR's legacy — an "empowerment of the East," said Oberender. "Which emancipatory movements and attitudes from the time preceding the German reunification have disappeared, but are still needed today?" is the leading question of the program.

The program of the opening day will recall the work of the Central Round Table of the GDR, explained co-curator of the event Elske Rosenfeld, who directly experienced the revolution as a 15-year-old East German teenager and has since made it a focus of her artistic research. 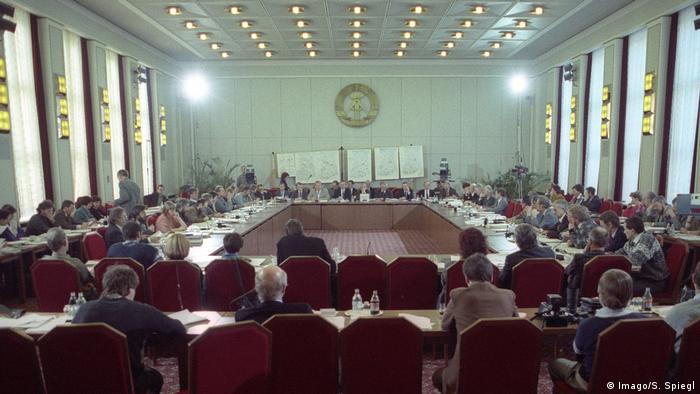 The Central Round Table of the GDR in 1991

The Round Table served as the central political institution charged with taking over the functions of the discredited GDR government in December 1989. It was also tasked with preparing a draft for a new constitution for the East German state. The ideas that were formulated in the document drew lessons from the East German state's failure, but nevertheless aimed to incorporate the socialist founding principle of a more equal society.

Its preamble was written by East German author Christa Wolf. Among the experts who worked on the document was West German lawyer Bernhard Schlink, best known for his novel The Reader, who will also be giving talks at the "Palast der Republik" event.

The constitutional draft was, however, quickly dismissed. Instead of creating a fresh constitution for a new country — which would have required extended negotiations — West Germany and East Germany came together as the Federal Republic of Germany under the existing western constitution.

"I was disappointed by the West's promise of quick prosperity," said Elske Rosenfeld, which is why she feels revisiting this forgotten constitutional proposal offers a different perspective that can energize debates today. "It is too easy to dismiss the revolutionary movements of the time as 'naive' or 'utopian,'" she added, but such a document "speaks for itself, without added comment." 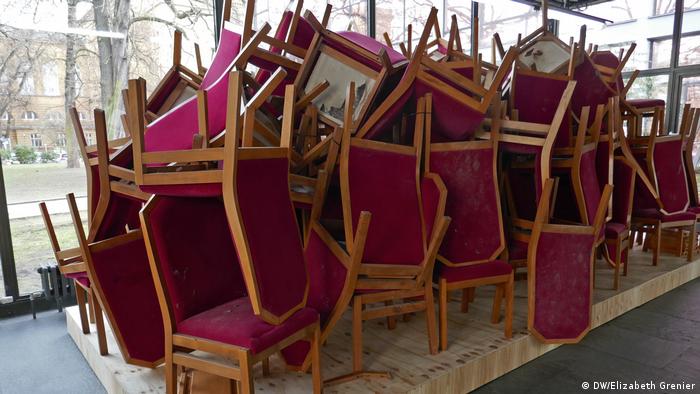 Developing a transnational strategy to counter the far right

After revisiting the progressive ideas of 1989, the last day of the event focuses on developing solutions for the future.

The day will open with a talk by former Greek Finance Minister Yanis Varoufakis, who co-founded the pan-European movement DiEM25 that will be the first transnational party in May elections to the European parliament. The palace will then host "the parliament of the future," through which philosophers, activists and historians — such as Benedicte Savoy, who in 2017 resigned from her position on the board of experts at the Humboldt Forum — will propose ideas for a new transnational constitution.

Ultimately, they aim to find solutions that could counter far-right populism, while questioning the established notion that "there is no alternative" to neo-liberalism.

The Greek people are paying dearly for having been lulled into a false sense of security, writes former Finance Minister Yanis Varoufakis. Germans, he says, are laboring under the same illusion today. (12.09.2017)