The ex-Greek finance minister, who opposed deep austerity imposed by Brussels and Berlin, is to stand in the European elections next year. Announcing the run, Varoufakis said it was time for a European Spring. 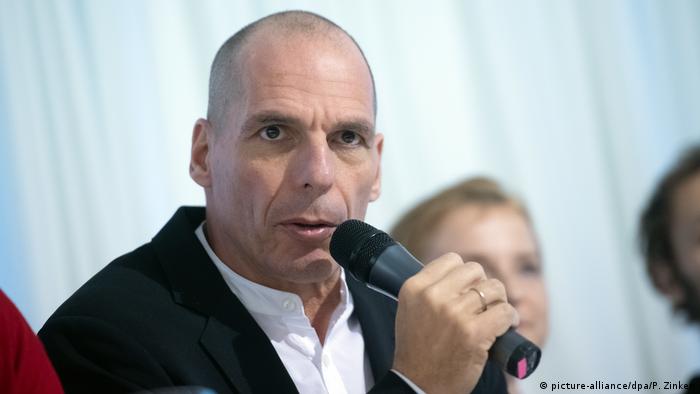 At a press conference in Berlin on Sunday, Varoufakis accepted the nomination on behalf of the Democracy in Europe Movement 2025 (DiEM25), which he launched in 2016 to "democratize" the continent.

As the economist spoke, his colleagues unfurled a banner with the slogan "European Spring" — a reference to the democracy movements that swept the Arab world from 2010.

Varoufakis insisted he meets the requirements for representing Germany, including that nationals of other European Union countries have a residence in Germany.

Varoufakis was outspoken in his opposition to the deep reforms and austerity measures imposed on Greece by its creditors after the country veered perilously towards bankruptcy and nearly crashed out of the euro currency.

He frequently clashed with his hardline German counterpart at the time, Wolfgang Schaeuble, who backed the painful medicine for Greece in an attempt to push the country back from the brink of default.

Following the recent rise of the far-right Alternative for Germany (AfD) party, Varoufakis said the political center in Germany was under threat because of austerity.

"On paper, Germany is drowning in money ... but the German people have been victims of the same austerity as the rest of Europe. The result is low levels of investment," he said.

He said his movement wanted to pour cash, raised if necessary via bond issuance, into green policies to tackle climate change.

As he prepares for a series of events to mark the centenary of the end of World War I, President Emmanuel Macron has warned against a surge in populism in Europe. His party is looking ahead to European elections. (01.11.2018)

Gangs and drug dealers are acting with impunity at Greek universities. A controversial law forbids authorities from entering state campuses and the government is refusing to budge. Anthee Carassava reports from Athens. (09.11.2018)