Greece's leader has argued that the 2019 EU parliamentary elections are not just a run-of-the-mill vote. With members at odds over migration, Brexit and rising right-wing populism, Europe's soul depends on the outcome. 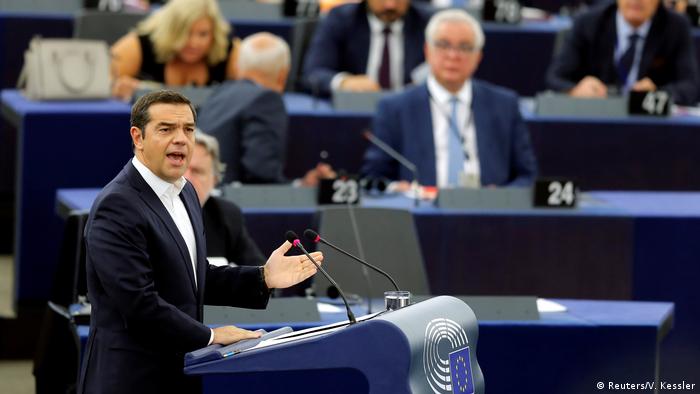 European nations must stand together to fight extremism and avoid sliding back into the past, Greek Prime Minister Alexis Tsipras told EU parliamentarians in Strasbourg on Tuesday as he looked to the upcoming EU elections in 2019.

The politician from the left-wing Syriza party, who had been invited to the EU parliament to speak about the future of Europe, described next year's vote as "more than just one more election."

"It will be a fight of basic principles and values to defeat extreme neo-liberalism and far-right populism," the Greek leader said. He called on the bloc's pro-European and democratic forces to unite and "stand side by side on the same side of history."

The European Union currently faces a broad range of challenges, including migration management, the UK's departure from the bloc, and the rise of right-wing populism, which have led to internal disagreement among its 28-member states and could significantly impact its future direction.

Tspiras' speech took place the day before European Commission President Jean-Claude Juncker will deliver his State of the Union address to the same parliament. Juncker is expected to address migration policy, such as by proposing to strengthen the EU's external borders.

Conservatives and populist governing coalitions in Austria, Italy and many other central European countries have pushed for closing Europe's borders while other nations have called for greater solidarity and redistribution of asylum-seekers.

At the height of migration flows in 2015, Greece had been the landing point for hundreds of thousands of refugees. On Tuesday Tsipras called for reforms to the EU asylum system while underscoring that his country had done what it could to manage refugee flows within the framework of international law.

The Greek premier also said that his nation could serve as an example for others in how it dealt with its economic crisis without succumbing to extremism.

"Very few believed we could pull it off, but we pulled it off," he added, referring to the country's adherence to painful economic constraints imposed by eurozone and international creditors."

But at the same time he spoke proudly of fulfilling EU financial requirements, he accused the bloc's "fetish for neoliberal" austerity policy of fueling the rise of right-wing populism across Europe.

He called for the EU to deliver more democratic and social reforms to its citizens.

Tsipras was invited to speak before the EU parliament as part of a pre-election initiative whereby heads of government share their visions for the future of Europe. Previously, leaders from France, Luxembourg and Ireland have addressed the assembly. Germany's Angela Merkel is expected to speak there in the fall.

Bernd Riegert in Strasbourg contributed reporting for this article.

From now on Greece will manage without an EU safety net. After eight years of aid, the financially troubled country appears to be on the road to recovery. Yannis Papadimitriou reports. (20.08.2018)

Greece 'opening a new chapter' as it emerges from bailout

EU officials have praised Greece as it emerges from the biggest bailout in economic history. But is it a cause for celebration for the Greek people? DW put that question to EU Economy Commissioner Pierre Moscovici. (20.08.2018)