Berlin squabbles over cross on City Palace reconstruction | News and current affairs from Germany and around the world | DW | 21.05.2017

An argument has broken out over whether the dome of the Berlin Stadtschloss should feature a cross. So what's more important: historical accuracy or separation of church and state? DW examines both sides of the issue. 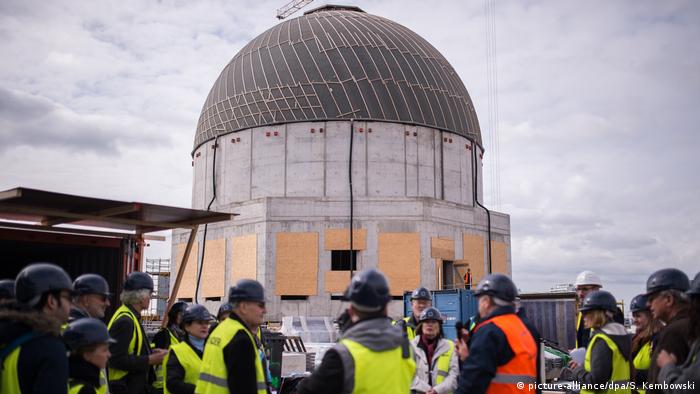 The reconstruction of the Hohenzollern dynasty's residence in the center of eastern Berlin has been a bone of contention ever since Germany was reunited in 1989-90. The latest chapter in the conflict was opened when left-wing politicians objected to plans to crown the building's dome with a golden cross. That, they argued, contradicted the Stadtschloss's future function as a home for the secular Humboldt Forum.

"It's supposed to be a public building that's inviting to everyone," Left Party culture spokeswoman Sigrid Hupach told the newspaper Die Welt. "How can an open dialogue between cultures take place if a cross atop the dome already sets the tone?"

On the other side are arguments that Christianity is an intrinsic part of the humanistic tradition of the West and that Germany should not deny parts of its past.

"The idea of offering a house open to all, as the Humboldt Forum wants to be, is only plausible if we're conscious of our own roots and display them," Germany's conservative Culture Ministry Monika Grütters told Die Welt. "Our culture of openness, freedom and sympathy with others has its roots in our Christian ideas of humanity. For me that's what the cross stands for, and that's why I think it's part of the palace."

Should there be a cross on the Schloss?  To answer that question it's helpful to look back at the history of both the city palace and the reconstruction project. 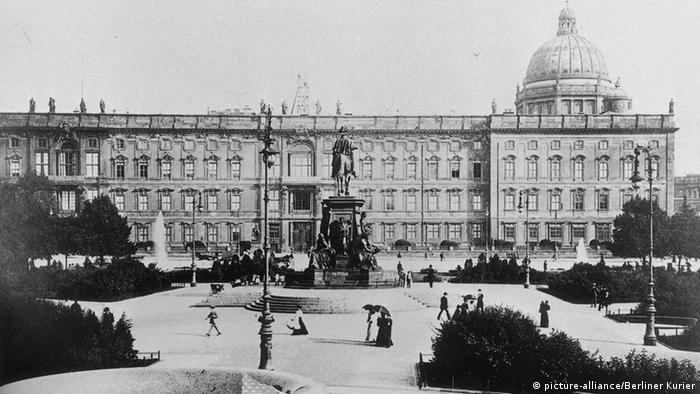 The original palace on the site was built in 1441 and was later expanded in the renaissance and baroque styles. The dome was constructed between 1845 and 1853 by the architect who had a greater influence on Berlin than any other, Karl Friedrich Schinkel. Members of the Hohenzollern dynasty, however, traditionally preferred to reside in nearby Potsdam. The palace was badly damaged in World War II and was demolished in 1950 by Communist East Germany, which built its modernist national parliament building, the Palace of the Republic, on the site.

With the end of the Cold War and the demise of East Germany, calls immediately came to reconstruct the Stadtschloss and restore the historic architectural ensemble near Alexanderplatz, which also includes the Berlin Cathedral and the National Gallery.

Politicians were initially skeptical, fearing high costs and questioning the usefulness of such a reconstruction. As well, many people argued that the communist Palace of the Republic should be preserved for its historic importance. But private citizens' initiatives kept pushing for the Stadtschloss to be rebuilt, collecting millions of marks to that end.

A German version of the British Museum

The breakthrough came in 2002, when the Bundestag agreed to the reconstruction after a number of compromises had been reached. The facade of the Stadtschloss would be reconstructed, but the interior would be modern. The 552 million euro ($618) cost was to be borne by a public-private partnership with national and local governments putting up the lion's share of the money (ca. 515 million euros) and private donations financing the facades. And the reconstructed building would be used for exhibitions by the Humboldt Forum. 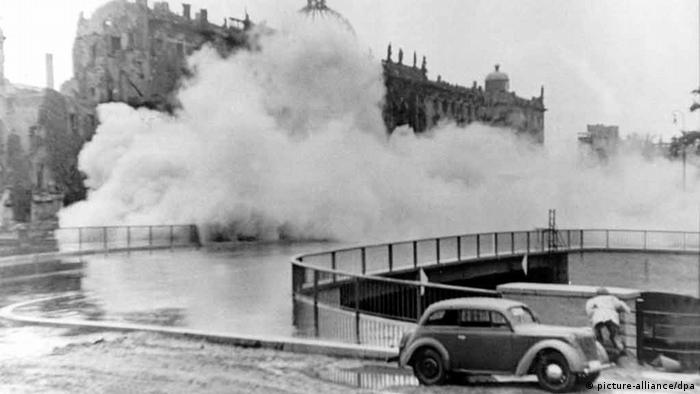 Not to be confused with the venerable Humboldt Foundation, the Humboldt Forum is a new museum project focusing on non-European art and world cultures. It's modeled on the British Museum and France's Centre Pompidou. In keeping with this orientation, its first artistic director is former British Museum head Neil MacGregor.

The Palace of the Republic was torn down between 2006 and 2008, and work on the reconstruction commenced in 2013. The building is scheduled to be completed next year, with the first exhibits opening in 2019. But criticism of the project still hasn't died down entirely.

Normally, religious symbols on reconstructed landmarks don't cause significant controversy. But because of its history and the fact that it's not an exact historical replica, there is an onus on the Stadtschloss to be a site of intercultural community.

"Under the sign of the cross?" wrote the Stiftung Zukunft Berlin in its statement. "That sounds very nineteenth century, when Christianity was the dominant culture." 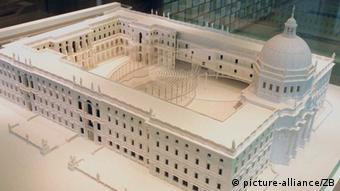 The Green Party's parliamentary leader in the Berlin Senate, Antje Kapek, supported that position, questioning whether private donations should be used to put up a Christian symbol.

"Reducing the Humboldt Forum to representing one religion would contradict its basic humanistic idea and be wrong," Kapek told Die Welt, "The new Berlin Stadtschloss is supposed to encourage exchanges between all cultures. And the donations were supposed to be used for the facades."

But others see the objections as instances of overblown political correctness, with no reason to enforce a strict separation of church and Schloss.

"The double purpose of the new Berlin palace apparently is too much of an intellectual challenge for some people today," wrote Die Welt newspaper in an editorial. "The use of the building looks toward a future of an increasingly tighter-knit, globalized world while the exterior looks back at centuries of German history. You can't just trim the details of this splendid baroque work of art to fit current fashions of political correctness."

Supporters of the cross say that the donors specifically want the external details to match those of the past. The cross, which will cost around one million euros, will be financed by a donation made by the widow of a mail-order catalogue magnate.