Okinawa shocked at cluster of coronavirus cases on US military bases | Asia | An in-depth look at news from across the continent | DW | 14.07.2020

Okinawa shocked at cluster of coronavirus cases on US military bases

The governor of Japan's most southerly prefecture wants a ban on more US troops being sent to the islands as fears grow that they may have spread the virus over the July 4 weekend. Julian Ryall reports from Tokyo. 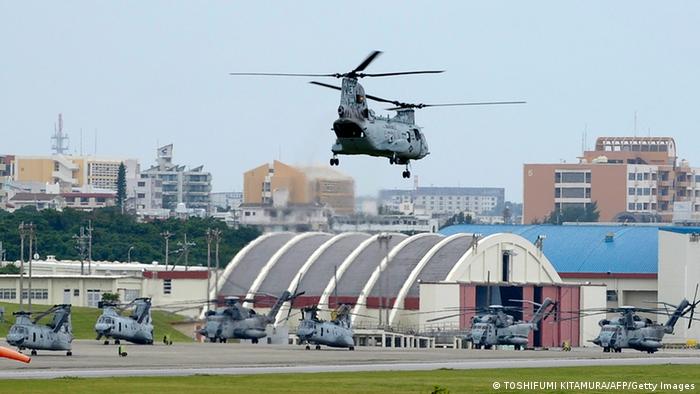 Okinawa Governor Denny Tamaki is to fly to Tokyo on Wednesday morning to call on the US ambassador and representatives of the Japanese government to halt the transfer of any more US military personnel to the prefecture amid a significant outbreak of the coronavirus on a number of US bases.

Thirty-two coronavirus cases were confirmed at the US Marine Corps Air Station Futenma on Monday, bringing the total number of cases among troops at installations in the prefecture to 98. The Futenma base and nearby Camp Hansen have been placed on lockdown by the US military, the prefectural government confirmed. Isolated cases have also been reported at Kadena Air Base, Camp McTureous and Camp Kinser.

The concern, however, is that many personnel from the bases celebrated US Independence Day on July 4 at bars, restaurants and on local beaches, bringing them into contact with local residents. Local health authorities are attempting to trace people who may have interacted with US personnel in recent days and are calling on residents to come forward for testing.

Read more: Thousands in Okinawa protest US Marine base relocation

Cutting the US presence

Tamaki is himself half-American but is committed to dramatically reducing the number of US military personnel in the prefecture – a figure that stands at 26,000 at present – and returning land occupied by US bases since Japan's defeat in World War II to local residents. In a statement he has expressed his disappointment at the failure of US military efforts to contain the outbreak.

"It is extremely regrettable that a large number of US military personnel were infected in a short period of time," he said, adding that local people have been "shocked" after they had all previously worked hard to prevent a major outbreak in the prefecture. To date, there have been 148 cases among residents of a prefecture of 1.5 million people.

"In addition, there is no doubt that there is a strong suspicion about US infection control measures so far," Tamaki said.

An official of the department within the prefectural government that handles base issues said the governor is due in Tokyo on Wednesday morning.

"He is going to the US Embassy for discussions and then he will be holding talks with the Japanese Ministry of Defense and the Ministry of Foreign Affairs," the official told DW, adding that the governor has two primary demands.

"He is going to request that the US suspend the movement of all US forces from the mainland US into Okinawa, and he wants a comprehensive review of the Status of Forces Agreement between the two nations, but particularly the section that relates to the application of Japanese quarantine laws," the official said.

The spokesman also played down media reports that US authorities were "reticent" to provide information on military personnel, which led to claims that this was hindering the effort to trace the movements of people who have been diagnosed with the virus.

"The US forces are cooperating and providing the prefecture with information, although due to personnel movements they have not been able to obtain as much information as they did previously," the official said.

In a statement, Brigadier General Joel L Carey, commander of the 18th air wing at Kadena Air Base, confirmed that the facility was reverting to an elevated health protection condition as a result of the outbreak.

"Commanders on the affected installations are taking steps based on the elevated, localized risk, but we must all recognize this is a joint Okinawa concern due to the close proximity of our military communities and of our Okinawan neighbors," he said.

"Please remember that no protective measure, including these elevated measures, will matter unless everyone is doing their part," he added. "We all must ensure that we adhere to the basics of social distancing, mask wear and good hygiene."

Despite calls for responsible behavior among the military personnel, local people have experienced problems with troops on countless occasions in the past, and there is simmering resentment at what many see as the irresponsible actions of some of their number.

"There is inevitably going to be a degree of unhappiness among local residents over the way in which the military acts and the problems that might cause for them," said Hiromi Murakami, a professor of politics at the Tokyo campus of Temple University.

"Young American soldiers will want to go out drinking and having fun and interacting with local people, but it's not in their nature to follow all the rules," she told DW. "And that is the complete opposite of Japanese people, the vast majority of whom will be following the rules, wearing masks, keeping their distance and so on. And when that happens, there is going to be friction," she added.

That friction is going to be serious if a large number of locals contract the virus and, potentially, large enough to lead to the demonstrations that have followed other notorious incidents involving US troops, such as abduction and rape in 1995 of an Okinawan girl aged 12 by three US military personnel.

"Governor Tamaki is going to ask the Japanese and US governments to address concerns about the virus spreading beyond the bases and it is important that the situation does not worsen because of the important strategic part that Okinawa plays in the US-Japan security relationship," Murakami added.