Demonstrators endured pouring rain ahead of an advancing typhoon to express their opposition to the US Marine base. Tokyo plans to begin pouring landfill for the new site in the coming days but opponents vow to block it. 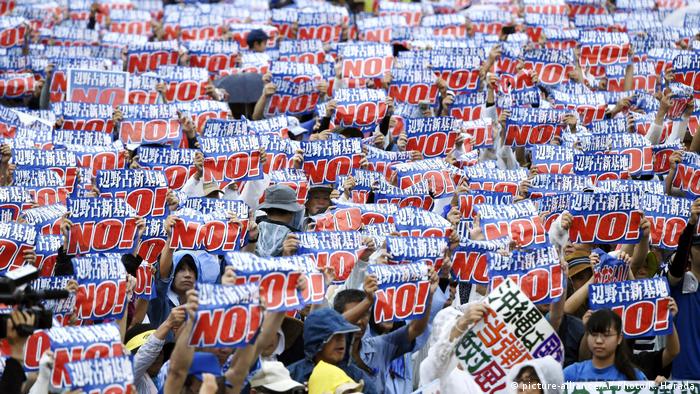 Tens of thousands of Okinawans protested Saturday, vowing to block the central government's planned relocation of a US military base from a heavily populated area to a remote location on the island.

The demonstrators want the base — the US Marine Corps Air Station Futenma — removed entirely from Japan's southern island. In addition, they argue that building a new base at the remote Henoko Bay site would damage the local environment.

Some 70,000 people endured pouring rain and an approaching typhoon in the island's capital, Naha, to voice their opposition to the plan. 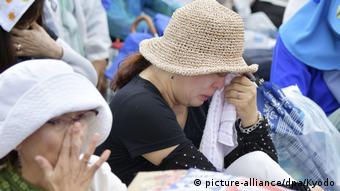 Reaction to a message from Okinawa's late-governor

Protesters chanted slogans while some held signs reading: "Henoko new base, NO!" and "Okinawans will not give up."

They adopted a resolution demanding the government in Tokyo immediately cancel the relocation project.

About half of the 50,000 US troops in Japan are based in Okinawa.

Demonstrators also held a moment of silence to remember Okinawa's late governor, Takeshi Onaga, who died of cancer on Wednesday. Onaga, who was elected in 2014 on a platform that included ending the US presence on the island, was a leading opponent of the base relocation.

He filed lawsuits against the central government in Tokyo and had vowed to revoke a landfill permit issued by his predecessor. The new base cannot be built without that permit.

Deputy Governor Kiichiro Jahan, represented Onaga at Saturday's rally and vowed to follow through on the revocation process in order to fulfill Onaga's "strong determination and passion." 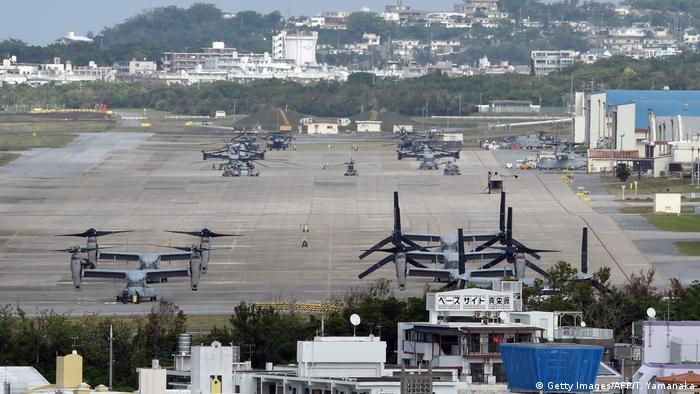 Okinawans have long opposed the presence of the US military base

Tokyo plans to start dumping soil into Henoko Bay in the coming days to make a new landfill for the US base.

Environmentalists oppose the base, and say development would damage the bay's corals and endangered dugongs — a marine mammal related to the manatee.

Tokyo insists the current plan is the only viable option.

The political battle over the US base reflects a centuries-old dispute between the Japanese mainland and Okinawa, which was an independent kingdom known as Ryukus, until it was annexed by Japan in 1878.

Okinawa was the site of Japan's only domestic battleground during the closing days of World War II. The island remained under US rule for 20 years after the rest of Japan regained its sovereignty.

Takeharu Onaga, son of the late governor and himself a member of the assembly, told protesters Saturday that Okinawa was still being forced to sacrifice for the Japanese mainland.

"The (relocation issue) is pushed to Okinawa because nobody on the mainland wants it," Onaga said, urging the rest of the country to also think about the issue. "Let us keep fighting so we can achieve my father's unfinished goal and give him good news." 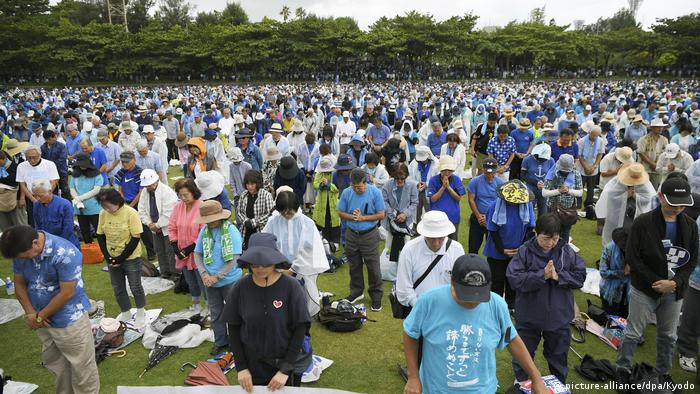 Protesters in Okinawa remember their late-governor