Japan floods increase risk of coronavirus spread | Asia| An in-depth look at news from across the continent | DW | 07.07.2020

Health officials have expressed concern about the coronavirus spreading among hundreds of thousands of people who have been transferred to evacuation centers in southern Japan after widespread flooding in the region. 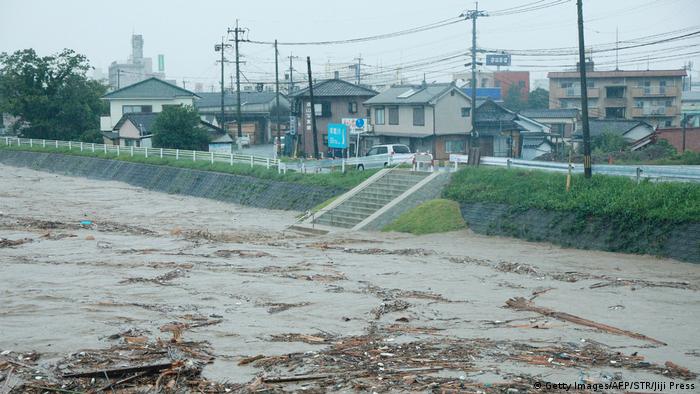 More than 1.2 million people have been forced to leave their homes across the southern island of Kyushu in the last five days and are being temporarily housed in schools, local community centers and other emergency facilities.

But experts say local authorities must ensure that precautions are in place to stop a single case of the coronavirus spreading among people – many of whom are elderly – who are forced to live in close proximity to others.

Fifty-two people have been confirmed dead and a further 11 were listed as missing as of Tuesday, with torrential rain still falling across large parts of Kyushu. As well as flooding in residential areas close to rivers, the heavy rain has destabilized hills and mountains triggering landslides that have engulfed homes.

Search and rescue operations are still under way, although authorities say they fear the worst as the initial 72-hour window for finding survivors has passed.

In Kumamoto Prefecture, 14 elderly residents of the Senjuen nursing home were swept away and died when the nearby Kuma River burst its banks in 11 places. A monitoring station recorded that the river was 12.7 meters above its normal level at 7am on Saturday morning before its measuring equipment failed.

Most severe flooding in years

The prefectures of Kumamoto, Oita, Miyazaki, Fukuoka, Nagasaki and Saga have borne the brunt of some of the most severe flooding and damage in living memory. In the 10 hours to 10am on Saturday, the town of Minamata recorded 51.3 centimeter of rain, nearby Yunomae had 49.7 centimeter and Amakusa reported 47.1 centimeter.

The national government has declared a Level Five emergency, the highest possible grade. Phone, electricity and running water supplies have been cut to thousands of homes across the region and the Japanese military and emergency services are attempting to reach mountain communities that have been cut off.

"We have done what we can, but no-one expected this much rain," said Keniichi Inoue, an official of the Amakusa town hall. "At the moment, we have eight fatalities as a result of the flooding and since Friday we have been telling people in areas that are at-risk to leave their homes and get to one of the designated emergency centers," Inoue added.

"Local schools, community facilities and parts of the city hall are being used as temporary shelters for people, although we are not sure how long they will have to stay," he said.

Hundreds of homes have been destroyed or simply washed away as rivers became torrents.

And he admits that there is concern about the coronavirus similarly cutting a swathe through the survivors.

"We are testing people for their temperatures when they arrive, we are asking them to wash their hands frequently and we tell them to keep a distance from other people, but it's not always possible," he said.

It is a similar situation in other communities across Kyushu. Ten shelters have been opened in the town of Minamata, where 20,000 residents have been told to leave their homes, with local officials at a local school gymnasium monitoring evacuees' temperatures and health and trying to make sure that families and individuals stay a safe distance away from each other.

In neighboring Kagoshima Prefecture, local governments have opened up more than 100 shelters and officials are urging people to keep their distance and are airing the facilities regularly.

Kazuhiro Tateda, president of the Japan Association of Infectious Diseases and a member of the committee set up by the government to combat the spread of the coronavirus, says there is good reason to be worried.

Health authorities in the Japanese capital reported 106 new infections on Tuesday, the sixth consecutive day that the count has been above the 100 threshold.

Tateda said health officials will be trying to apply some of the lessons that were learned in the immediate aftermath of the March 2011 magnitude-9 earthquake and subsequent tsunami that struck northeast Japan.

"There are some parallels between the two and some knowledge that can be applied," he said. "In 2011, the disaster struck in the influenza season and we did have problems in a lot of the temporary shelters housing the tens of thousands of people who had lost their homes. After that, we drew up guidelines on how to stop illness spreading in evacuation centers and emergency facilities as we knew the information would be useful again in the future," he said. "Now we have to make sure those guidelines are implemented correctly."