Coronavirus: More Japanese to swap urban life for the countryside | Asia | An in-depth look at news from across the continent | DW | 18.06.2020

Coronavirus: More Japanese to swap urban life for the countryside

Tired of being cooped up at home and the grind of the city, more Japanese people say they hope to escape — and restrictions under the state of emergency prove they can have a more balanced life by working from home. 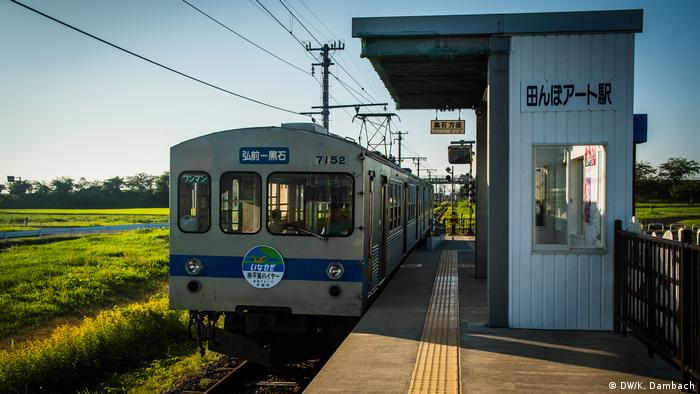 As he nears retirement after a career in academia, Jun Okumura has realized that he wants something different for the next stage of his life. A resident of Tokyo for decades, he wants to exchange tarmac pavements for the feel of sand between his toes and the skyscrapers for bamboo groves with green hills as their backdrop.

"I was thinking of escaping to one of the islands south of Tokyo and setting up a small hotel that catered to foreign visitors," he told DW. "It would be great to be out of the city. The islands have surfing and great diving, there is a marathon every year and it's a beautiful place, but Tokyo is still less than one hour away by hydrofoil," he added.

"It may be a dream, but it certainly appeals."

Okumura is only one of many of Japan's urban residents who are considering exchanging the frenetic pace of life in the city for something a lot more laid back, an outlook that has been encouraged by the ongoing coronavirus pandemic. Plenty of people who have been cooped up in their small apartments for weeks on end are increasingly pining for the great outdoors — particularly those whose companies have embraced the concept of working remotely.

An annual study of 10,000 inhabitants of Tokyo and three surrounding prefectures has discovered that fully 49.8% of people want to live in the countryside in the future. The study was conducted in February, just as the coronavirus was beginning to tighten its grip on the nation, and was up sharply from the 23% of respondents hoping to move to a rural part of the country just two years previously.

Even before the coronavirus outbreak, the national government was drawing up plans to encourage people to swap the city for the countryside and reverse the decadeslong trend of young people moving to urban areas in search of work. In 2018, the government announced a scheme under which residents of Tokyo could receive 3 million yen (€24,853) if they left the congested capital to live elsewhere.

And while Japan's population is in gradual decline after peaking at 127.32 million in 2010, the number of residents of Tokyo continues to rise as young people leave the rural hinterland in search of better education and employment opportunities. The strain is beginning to tell on cities' public transportation systems, utilities, hospitals and other infrastructure.

In parallel, countless villages and towns in the countryside are today made up of elderly residents, with schools closing and farmland left to go fallow because there are no young people left to work it.

Asked in the most recent study why they wanted to swap the city for the countryside, nearly 55% cited "the rich natural environment," while slightly more than 16% said they wanted to go back to the areas where their families were originally from.

"The coronavirus has changed things, for sure," Okumura told DW. "People now want a better quality of life, to be close to a beach or the mountains, to have space to move around in. And when you factor in the price of real estate in Tokyo, then moving out makes even more sense."

"A second-hand apartment in the countryside only an hour or so from Tokyo is only going to cost $40,000 (€35,584) or so, and as long as people are able to work from home and go into the office maybe once a week, then this is suddenly a very viable proposition," he added.

Some of the communities that previously lost their younger generations to the bright lights of Tokyo, Osaka and elsewhere are now looking to lure newcomers with attractive incentives.

The town council on the island of Kuroshima, six hours by ferry off the southern island of Kyushu, is offering subsidies of 85,000 yen (€704) per person per month and also covering the cost of moving to the island. An added sweetener to the deal is a one-off payment of 300,000 yen (€2,485) or a cow.

The town of Tsuwano, in the southwestern prefecture of Shimane, has also drawn up plans to revitalize the community with outsiders. The town presently has around 7,200 inhabitants, with the figure falling more than 9% between 2010 and 2015. In the previous 5-year census up to 2010, the population declined 11.4%, the sharpest contraction in the prefecture, said Sugako Sugawa, of the town's Life Promotion Division.

"A lot of younger women, in particular, leave the town, which means there are fewer local marriages and then fewer children being born here," she said. "At the same time, the population is aging at a faster rate, so it's a vicious cycle."

The scheme has had some impact, with 1,148 people moving to Tsuwano in the nearly five years to December 2019. Unfortunately, that figure was still eclipsed by the 1,374 who moved away from the community.

There is, nevertheless, optimism that a combination of a desire to escape the city and find a more peaceful existence will encourage more people to make the town their home, Sugawa said.