Coronavirus hastens Japan′s shift away from hanko seals | Asia| An in-depth look at news from across the continent | DW | 12.06.2020

For centuries, the hanko have served as the official mark of companies, organizations and individuals. The COVID-19 health crisis has pushed Japan to realize that technology can be deployed for convenience and speed. 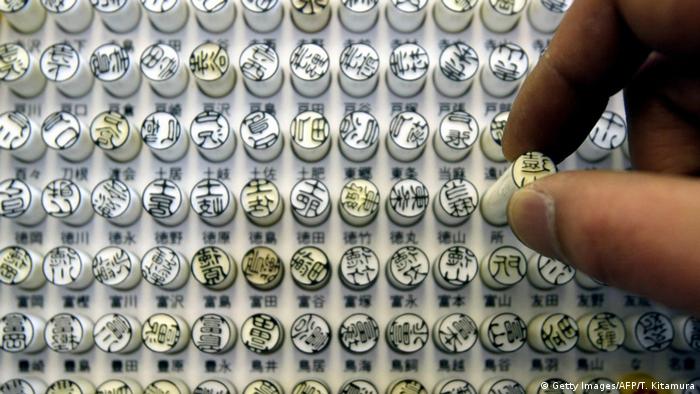 Even before the coronavirus pandemic struck, the management of Tohoku University was looking at ways to reduce paperwork, streamline its operations and reduce the working hours required to run one of the leading institutes of higher education in Japan.

Limitations on travel introduced after the virus began to spread across the country, along with the need to shift lectures online and the start of physical distancing throughout the university, in the city of Sendai, in northeast Japan, hastened both the discussions and the decisions.

It did not require much persuading for management to decide to largely do away with the official "hanko" seals that are a critical symbol of authority for companies, organizations and governments.

The repercussions of that decision, however, are seismic.

Hanko seals are used on every official form that a company or organization produces, while every individual Japanese has his or her personal seal that is applied to every important document, from applications for a passport, credit card or mortgage to school applications and even accepting a registered letter from the post office.

The hanko are used in Japan instead of a person's signature and they are carefully guarded. The concept of an official seal was first introduced from China around 2,000 years ago and initially limited to the nobility. With modernization of Japanese society from the 1870s, more ordinary people adopted seals and they evolved into a requirement for every citizen. The coronavirus crisis has changed that.

"Even before the global pandemic, we had been exploring ways to streamline our administrative operations to be less bureaucratic and more efficient," said Tomoko Yokota, a spokeswoman for Tohoku University. "But when Japan started having cases of coronavirus infection, social distancing and other preventive measures became a priority.

"So we drew up an emergency action plan to move classes online and have the majority of our administrative staff work from home," she told DW. "Abolishing the use of hanko seals means that staff now do not have to physically be in the office to sign off on documents. This will allow for more remote work and less paper wastage."

The university estimates that moving away from hanko will save the university around 80,000 working hours a year, meaning better use of the existing resources, Yokota said. To replace physical seals, the university is introducing an electronic approval system that moves virtually all administrative work online.

"In the 'new normal' of the COVID-19 pandemic, we expect that there will be times when staff have to work from home or in shifts," said Yokota. "With the new system, staff will have remote access to resources and meetings and, without the need for a physical hanko, can carry out their duties with minimal disruption to the daily workflow."

Even the Japanese government and the nation's bureaucracy — never one to adopt new concepts easily or quickly — have accepted that hanko are not conducive to a modern economy, and Prime Minister Shinzo Abe in late April ordered ministries to draft new laws to get around the nation's archaic dependence on seals.

The prime minister's order came after it became apparent that requests made to companies at the height of the pandemic to encourage their staff to work from home and avoid public transport to stop the virus from spreading further were being partly ignored.

Companies needed senior officials to be physically seated at their desks just so they could apply hanko to company documents, without which entire businesses would have ground to a halt.

Kiyoko Iwamura works for a multinational in Tokyo and said she felt "very sorry" for the senior member of staff of her department as he had to brave the morning commute with other people who had no choice but to go to their offices.

"I was able to work from home and only go into the office once a week or so, and even then I avoided the busy times on the trains and made sure that I did not stay very long, but he had to be there the whole time," she said. "He was lucky because he never got sick, but he must have been very worried.

"And it's crazy that he had to risk his health for something as old-fashioned as a seal that needs to be applied to documents."

To date, Japan has reported 17,225 cases of the coronavirus nationwide, with 922 fatalities.

Yet the hanko industry is standing its ground in the drive toward modernization, insisting that seals still have an irreplaceable part to play in Japanese society. 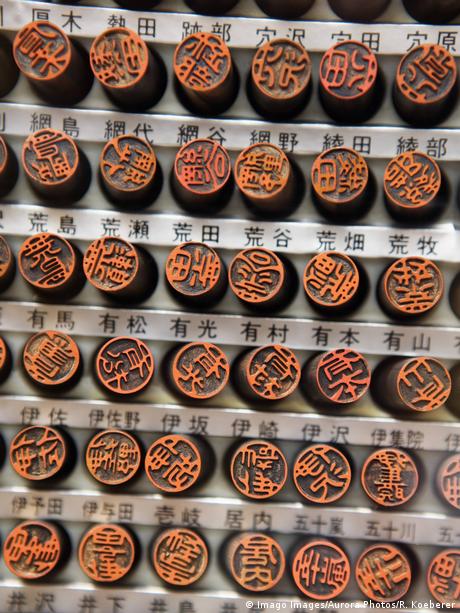 The hanko are used on every official form that a company or organization produces, while every individual Japanese has his or her personal seal that is applied to every important document

"A seal is a tool that clearly proves the will of the person who uses it and it is not possible to engrave a seal in exactly the same way, making each hanko unique," said Tokui Takao, chairman of the All Japan Stamp Industry Association.

"In order to maintain this uniqueness, we are trying to improve the skill and awareness of the industry by improving seal engraving technology to eliminate forgeries," he said.

"Hanko are still used in many formal contracts and certifications, both for companies and individuals, and I do not see that changing soon," he added. "Even when you compare the hanko with the alternatives — a person's signature or an electronic seal — then people will still use traditional hanko because they place importance on the design and security of the seal."

Takao admits, however, that change is in the air, and his association must also evolve to remain relevant.

"We expect that orders at hanko stores will decrease in the coming years, in part because of the recent stagnation in corporate activities," he said. "But we are also studying how to best utilize electronic seals in order to meet the need of an increasingly digitized society."

Coronavirus: Is home office becoming a new normal in Japan?

Employees have adapted to working at home and companies appear to be happy with the financial benefits, but there are concerns that the shift away from the salaryman model will experience problems. Julian Ryall reports. (09.06.2020)