Coronavirus: Is working from home becoming the new normal in Japan? | Asia | An in-depth look at news from across the continent | DW | 09.06.2020 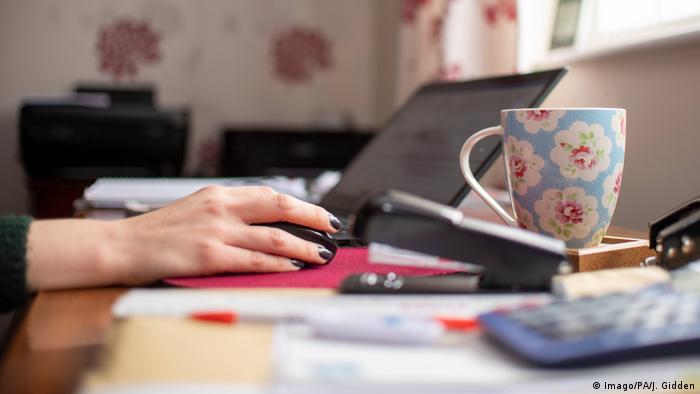 The tides of salarymen and office ladies who used to cram into commuter trains to flood into Japan's major cities have slowed to a trickle over the last three months as the government encouraged companies to keep their staff at home due to the coronavirus crisis. And even now, with life returning to normal in Tokyo, Osaka, Nagoya and elsewhere, the number of employees heading for their offices is nowhere near the levels of before.

Experts believe that Japan's legendary salaryman has had his day and that work in a nation that is famous for its diligence and commitment to the company may never be the same again as firms embrace remote working and more flexible hours.

"I have been working from home for the last two months and, to be honest, it was very stressful at the beginning," said Masakatsu Yamamoto, who works for Tokyo-based property developer Mori Building Co. "For the first two weeks I was fighting with my wife over who would use the dining room table, but we got used to the situation, doing everything through our computers or mobile phones."

"By the beginning of the second month, I had become really comfortable with the situation," he added.

From the start of June, however, the company has begun to gradually bring staff back into the office and presently about 30% of Mori employees are back at their desks. For Yamamoto, it's not a positive development.

"I'm a department manager, so I thought I should start going back, but I found it so difficult to readjust to being in the office," he said. "It was like reverse culture shock."

Yamamoto says plenty of people who were previously completely happy with the way they worked are having second thoughts after enjoying the benefits of avoiding the commute, four-day weeks, working from home and having more free time with friends and family.

Companies have also caught on to the idea and are embracing remote working. In an interview with the Yomiuri newspaper on June 7, Masahiro Minami, president of financial services giant Resona Holdings Inc., said his company plans to reduce office work to zero in as little as three years by introducing more technological solutions.

Telecommunications firm NTT Data has decided that a maximum of 50 percent of its staff will need to come to the office and they will be encouraged to stagger their hours. Hitachi Ltd and Mitsubishi Electric Corp. are following suit. Toshiba Corp. is considering introducing a four-day working week.

The move has even been welcomed by Keidanren, the Japan Business Federation, which responded to the coronavirus pandemic by calling on member firms to adopt "various working styles" to reduce the spread of the disease. And now it is advocating that those emergency measures be made permanent.

Martin Schulz, chief policy economist at Fujitsu Ltd's Global Market Intelligence Unit, says he has not seen the inside of his offices for three months and admits to being taken aback at the sea change that Japan is experiencing in its attitudes towards working.

"I would never have expected to see this, but I think it has gone on for long enough that it has caused a major rethink within companies," he told DW.

There had already been some change in a few companies and they were shifting to flexible work times and "hot-desking," where no employee had their own permanent position, he said, adding, "But now companies have realized that it is possible to do most things online, that meetings can still happen outside the company and I expect to see companies here go more in that direction."

There are significant cost advantages for companies that no longer need so much office space, he said, while staff who no longer have to endure the commute and can be more relaxed will be happier with an improved work-life balance.

Yet the idea of working from home might still take a bit of adjustment among older and more senior staff at some of Japan's most conservative companies, said Shino Naito, a senior researcher at the Japan Institute for Labor Policy.

"Traditionally, Japanese companies have considered 'work' to be something that only happened when their employees were physically in the building and that workers should put in long hours and lots of overtime," she said.

"Despite the benefits, I’m a bit worried about an increase in remote working," she said. "Japanese people tend to work hard wherever they are, but if they are working at home and there are children there, for example, then they cannot concentrate and they may think they have to work long into the night to get everything completed."

"Also, most companies just do not have an established system for remote working in place, so there will be problems communicating with superiors or colleagues, and there is no support system when a problem occurs," she added.

"Employers need to establish systems to support employees who are working remotely, including ensuring that they limit their working hours and taking measures to ensure they are not affected by mental illness," Naito said.

Yamamoto says that while he has enjoyed working from home, he does sense that something might be lost if this becomes the "new normal" for companies.

"I have been very efficient when working at home and I was able to get everything completed that I needed to – but I did miss the encounters with my work colleagues, just walking down a corridor and meeting them, sharing a coffee and a quick chat."

For a nation that prides itself on technological innovation, Japanese companies have for too long relied on outdated technology such as the fax machine. But that is finally changing. Julian Ryall reports. (06.05.2020)

Experts are concerned that local authorities in the most seismically active nation in the world would be overwhelmed should a natural disaster add to the problems caused in their communities by the COVID-19 pandemic. (04.06.2020)

Japanese authorities have condemned attacks on people with the coronavirus and those trying to treat them. The country has so far reported more than 16,000 COVID-19 cases and around 700 related deaths. (14.05.2020)