Coronavirus in Japan: Arson, ostracism, online attacks against medics, victims | Asia | An in-depth look at news from across the continent | DW | 14.05.2020

Japanese authorities have condemned attacks on people with the coronavirus and those trying to treat them. The country has so far reported more than 16,000 COVID-19 cases and around 700 related deaths. 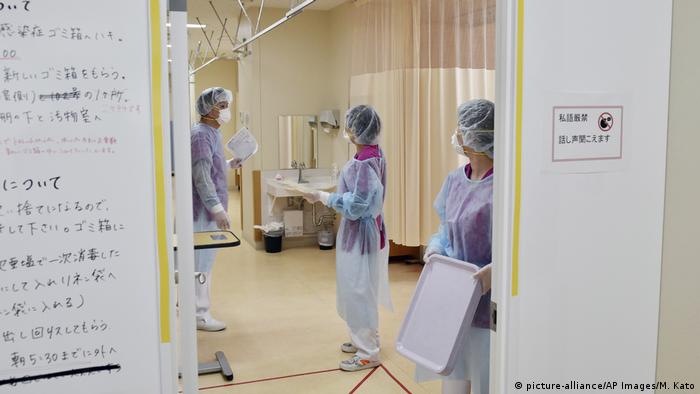 The fire that broke out last week at Hotel Maruji in Utsunomiya was small and soon brought under control by a member of staff with a fire extinguisher, but it caused shock across Japan. The blaze, investigators soon determined, had been deliberately set using lengths of carpet and wood — and they suspect it was a form of protest.

The hotel has been set aside as a quarantine facility for local residents who have been diagnosed with mild symptoms of the novel coronavirus. Four people were staying at the 111-room hotel at the time and none were injured, but the incident is just one of several across Japan that have targeted people with the illness, medical staff who are treating COVID-19 patients, and even individuals who have been named on social media as having tested positive for the virus.

And while it is understandable that most people will want to avoid anyone who is unwell with a disease that has claimed nearly 300,000 lives around the world, including almost 700 in Japan, the hostility comes as a surprise in a society that has long prided itself on supporting its most vulnerable members and encouraging others in difficulty to "gambatte," a phrase that translates as to do one's best.

"It is, unfortunately, human nature," said Jun Okumura, an analyst at the Meiji Institute for Global Affairs. "I think that people are tired of the stress surrounding this disease; they are tired of their routines being disrupted, of not being able to go shopping, to restaurants, to see friends or family and — for some people — it’s enough to make them snap," he added.

"Usually they take out their frustrations on their social media accounts, but some of them are clearly sufficiently unhappy to do something destructive," Okumura told DW. "But it is unfortunate when they target the unwell or the people who are trying to help all of us stay well."

Elsewhere, police have investigated reports of cars with number plates from outside the prefecture having stones thrown at them or of other drivers acting aggressively, while Kyoto Sangyo University received arson threats after a number of its students returned from studying overseas and tested positive for the virus. One caller to the university demanded to know the names and home addresses of the affected students.

In Iwate, an elderly man who had traveled outside the prefecture was not infected with the virus was forbidden from moving into a retirement home and was shunned by his neighbors. He died in a house fire. In Mie, local people vandalized and threw stones at the home of a person with the illness. In Osaka, a member of the city council described a young person who had tested positive for the virus as "a murderer" of elderly people.

Even doctors and hospital staff who have scrambled to help people have become the target of workplace harassment and criticism from their superiors, while their children have been bullied in schools.

The Japanese Association for Disaster Medicine (JADM) has released a strongly worded statement calling on employers, fellow health care workers and schools to act to stop the harassment on the grounds that it is a breach of human rights.

"Some medical workers who have risked their health to save others have reported being treated unbelievably unfairly," the association said in a statement.

Some members of the 5,000-strong association, which acts as an umbrella organization to coordinate the dispatch of qualified first-responders in an emergency situation, reported being described as "germs" by colleagues.

"This should be considered a human rights issue," the association said. "We strongly protest and demand that the situation be rectified."

JADM has received "dozens" of reports of harassment from emergency personnel, including one being banned from the hospital where he works and another being labelled an "infection source" by colleagues.

"Without their actions, more passengers and crew could have developed serious symptoms and more lives could have been lost," the statement said. "Criticism that is based on prejudice or bias cannot be tolerated."

Prime Minister Shinzo Abe has condemned the incidents, telling a parliamentary session, "It's shameful. Anyone could have been infected."

Tomoko Suga, a professor at Hokkaido’s Rakuno Gakuen University who studies domestic violence, agrees that the coronavirus has changed society in Japan, but she does not believe it has become more violent or more critical of others.

"I just think these are cases of people not wanting to be ill or for their friends or families to be ill, so they are trying to keep other people away and out of their neighborhoods," she told DW. "It’s just a very basic protection mechanism and I believe that Japan is still generally a very community-oriented nation and society where people are supported by those around them."

Okumura says he hopes Suga is correct and that the situation will calm down once the pandemic has run its course, but he fears that things might worsen even more should the outbreak continue for weeks and months to come.

"It could go either way," he said. "Tensions could be eased again if things look like they are improving, but the alternative is a contagion effect and more people seeing violence and online criticism as an appropriate response."