In a special session at parliament, Jacinda Ardern pledged to deny the Christchurch attacker the notoriety he craved. She also heavily criticized the role of social media platforms in the tragedy. 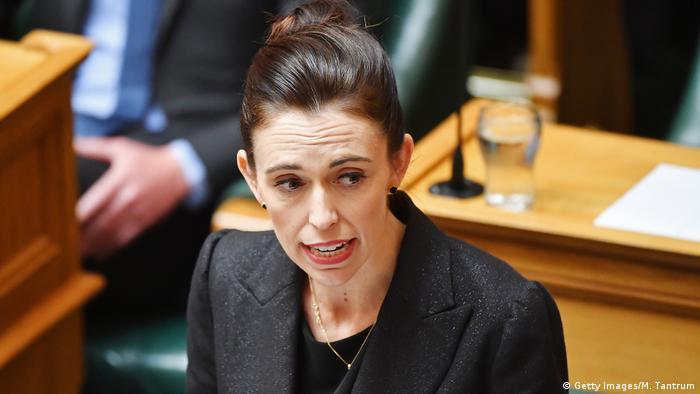 New Zealand Prime Minister Jacinda Ardern told parliament on Tuesday that a gunman charged with a terrorist attack on two mosques that killed at least 50 people  will face the "full force" of the law.

At a special session of parliament to commemorate the victims of the attack, Ardern vowed never to mention the accused by name in order to deny him a platform.

Ardern opened her speech to parliament by saying "peace be upon you" in Arabic, a common greeting in Muslim-majority countries, before reading the names of the victims. She vowed to deliver justice to the "families of the fallen."

What the prime minister said:

On Friday, a 28-year-old suspected gunman launched attacks on two mosques in the New Zealand city of Christchurch. In a massacre that shocked the world, the suspect livestreamed the assault on Facebook.

Police arrested the man, who is believed to have published a far-right manifesto linking his assault with other extremist attacks against Muslims. "He is a terrorist. He is a criminal. He is an extremist," Ardern said. "But he will, when I speak, be nameless."

Facebook said the video was viewed fewer than 200 times during the live broadcast and about 4,000 times in total before being removed.

The first user report on the original video came in 29 minutes after the video started, and 12 minutes after the live broadcast ended. A user on image board website 8chan posted a link to a copy of the video on a file sharing site before Facebook was alerted to the video.

According to Facebook, 1.5 million versions of the video were removed during the first 24 hours, but Ardern expressed frustration that the footage could still be found online four days later.

"We have been in contact with Facebook; they have given us updates on their efforts to have it removed, but as I say, it's our view that it cannot — should not — be distributed, available, able to be viewed," she said. "It is horrendous and while they've given us those assurances, ultimately the responsibility does sit with them."

Arden said she had received "some communication" from Facebook's Chief Operating Officer Sheryl Sandberg on the issue.

The Global Internet Forum to Counter Terrorism, led by Facebook, YouTube, Microsoft and Twitter, said it had added more than 800 versions of the New Zealand mosque shooting video to a shared database used to block violent terrorist images and videos.

The group, which was formed in 2017 in response to official pressure to do more to combat online extremism, said that it added "digital fingerprints" for the visually distinct videos to its list.

Following the attack, Australian Prime Minister Scott Morrison said he had written to the current G-20 chairman, Japanese Prime Minister Shinzo Abe, calling for agreement on "clear consequences" for companies whose platforms are used to facilitate and normalize horrific acts.

Guns in the crosshairs: The government has announced plans to tighten gun control laws, including a ban on certain semi-automatic rifles and potentially implementing a buyback program.

"As the Cabinet, we were absolutely unified and very clear: The terror attack in Christchurch on Friday was the worst act of terrorism on our shores, it was in fact one of the worst globally in recent times, it has exposed a range of weaknesses in New Zealand's gun laws," Ardern said. Authorities said the suspect had legally purchased firearms used in the assault.

Awaiting trial: The suspect will face a hearing on one count of murder at New Zealand's High Court on April 5. However, Ardern noted more charges will be leveled against him in the near future.

Read more: Grief and shock, but 'still home' in Christchurch

The Christchurch terror attacks have prompted the government to quickly review its gun law policy, with tighter legislation expected as the outcome. The shooter used military-style arms to target people at two mosques. (18.03.2019)