German Foreign Minister Joschka Fischer said Monday European Union politicians must continue with further expansion of the bloc even in the face of growing popular opposition to enlargement. 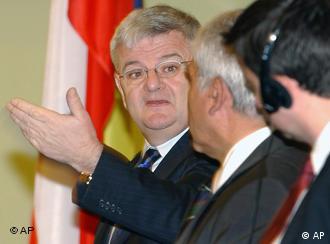 "In my view, we must carry out commitments, even if they are unpopular," Fischer told a meeting of Polish diplomats in Warsaw, according to Reuters. "The EU must do what it promised to do. However, if we think we can enlarge without deepening integration and closing ranks, then from this crisis we can tumble into a bigger one."

Earlier on Monday, French Interior Minister Nicolas Sarkozy said the EU should suspend enlargement after letting Bulgaria and Romania in following the French and Dutch voters' rejection of the EU constitution, in what appeared to be a reference to Turkey's EU entry bid.

The Polish capital Warsaw is hosting a meeting of foreign ministers from Germany, France Britain and Poland in an effort to break the deadlock in the aftermath of the failed European Union summit earlier this month. According to Polish diplomats, Warsaw is keen to play the role of a mediator in the conflict concerning the future of EU reforms and budget.

At the same time, France and Britain this week are launching separate charm offensives among the new EU member states of central and eastern Europe to push for their very different visions of the bloc's future. 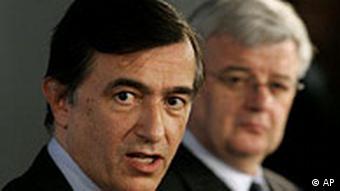 French Foreign Minister Philippe Douste-Blazy and British European Affairs Minister Douglas Alexander are both in Warsaw bidding to influence the Polish position in the budget negotiations of the months ahead.

On Friday, France's European Affairs Minister Catherine Colonna flies to Budapest on the first of a series of visits which a foreign ministry spokesman in Paris said are "intended to display our particular attention to the new member states." Alexander and British deputy prime minister John Prescott are also planning several visits to the new members, as their country begins its six-month presidency of the European Union.

The rival diplomatic initiatives are part of the fall-out of the Brussels summit, in which Britain lost capital among its traditional allies in central and eastern Europe by appearing as the prime culprit for the blockage of the post-2007 budget.

If London sees it as an urgent priority to smooth over the difficulties by promising early action on the budget under its presidency, France believes it has an opportunity to recover some of its lost standing in the region.

The French ministers are likely to lay stress on the shared interest that France and many of the new members have in sustaining the Common Agricultural Policy (CAP), which has been under attack as exorbitant and outmoded by British Prime Minister Tony Blair. In his visit to Poland Monday, Douste-Blazy will have the backing of his German counterpart Fischer who will join tripartite talks with Polish Foreign Minister Adam Rotfeld. 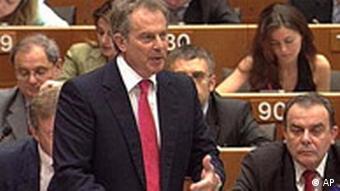 Blair speaking to MEPs at the European Parliament in Brussels

It was at Poland's initiative that the 10 new member states suggested at the Brussels summit that their EU allocations be reduced if that would make it easier to reach a budget deal. The idea -- described as "moving" by French President Jacques Chirac -- came to nothing, because Blair stuck to his position that Britain would only discuss its rebate if Chirac also agreed to put the CAP on the negotiating table.

"It is a good opening for us (with the new members). Discussions with them are going to accelerate," said a French diplomat. "These countries are used to language from Britain that is very pro-enlargement, but when it came to putting hands in wallets they weren't there. The new members won't forget that," he said.

Julie Smith, analyst at the Royal Institute of International Affairs in London said: "Britain's attitude has not gone down well with these countries. France now has an opportunity to build up relations with them."

However Guillaume Durand of the European Policy Center in Brussels warned that the current alignment may be only superficial. The new members have not forgotten Chirac's contemptuous remarks when they offered support to the US over Iraq that they had "missed an opportunity to keep quiet."

"Above all they know that the French -- who rejected the EU constitution on May 29 -- have always been uneasy about enlargement," he said.

Not since Britain's joining of the US-led invasion of Iraq has the country seemed so isolated in the EU as Tony Blair remains at loggerheads with France and Germany over EU spending plans ahead of a crucial summit. (June 15, 2005)

Ahead of taking over the EU presidency, Tony Blair addressed the European Parliament Thursday, amid criticism -- including from Germany -- that his EU policy is motivated by a desire for looser free trade area. (June 23, 2005)