NATO wishes no conflict with Russia, but will protect members | Europe| News and current affairs from around the continent | DW | 02.06.2016

NATO wishes no conflict with Russia, but will protect members

Ready for dialogue, but showing strength: That’s the strategy for Russia that NATO is expected to confirm at a summit in July. Germany and NATO also want to increase cooperation in fighting human traffickers. 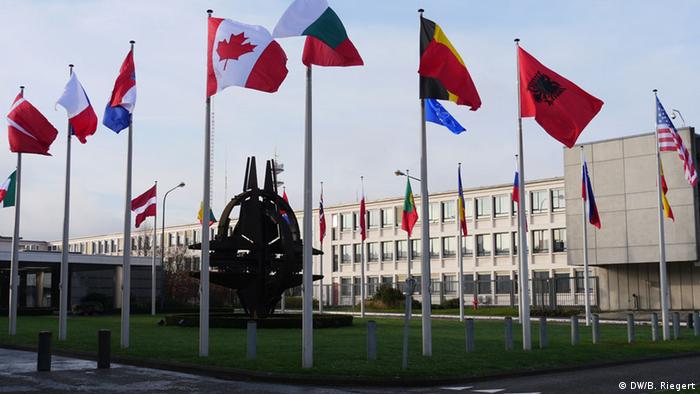 Alea iacta est: the die is cast. NATO Secretary General Jens Stoltenberg has left no doubt about the organization's plans to boost its presence in Eastern Europe: "We're going to increase our presence with a range of strengthened battalions that we will deploy in the eastern parts of the alliance," said Stoltenberg following talks with German Chancellor Angela Merkel in Berlin.

Stoltenberg did not give any numbers, but there is talk of moving several rotating battalions with several thousand soldiers to the Baltic States and Poland. German soldiers are also expected to be included in the plans. Once in position, NATO will have a large military presence along the Russian border for the first time since the end of the Cold War. 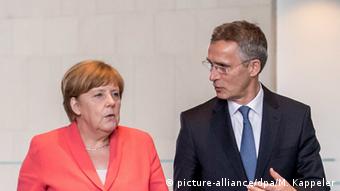 Stoltenberg was in Berlin for talks with Chancellor Merkel

It's a tricky situation, especially for Germany. "We talked about how we are to understand our engagement in Eastern Europe," the chancellor was quick to say after her meeting with Stoltenberg. She added that Germany has always been and will always be a country that regards the NATO-Russian Founding Act as an important document.

Germany intends to remain in dialogue with Russia and is keeping the political and diplomatic channels open. On the other hand, it is also bound to fulfill other duties associated with the alliance. Several "important steps" will also be taken at the NATO summit in Warsaw, Merkel said.

Stoltenberg showed understanding of the balancing act that is demanded of Germany. He also stressed that the transatlantic military alliance in no way wants a conflict with Russia. "NATO is taking appropriate action of a defensive nature, and this means that we are contributing to our common defense." 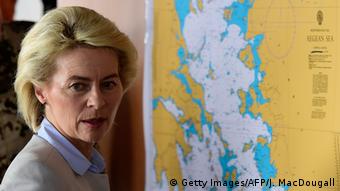 NATO's goal is a "credible deterrence " as Stoltenberg put it. The alliance definitely wants to block any further plans Russia may have to expand westward.

Given what happened in Ukraine with Russia's annexation of Crimea, the Baltic States are especially concerned that the same thing could happen to them.

"We see a Russia that is prepared to use military force to change the borders that have existed in Europe since the Second World War," said Stoltenberg. "NATO has to react to this, and are doing so in that we are strengthening our collective security to an extent we haven't done since World War II."

In addition to relations with Russia, the security situation in Southern Europe and the Middle East was also a topic during the talks between Merkel and Stoltenberg. NATO says it wants to do more to help train Iraqi soldiers and officers, and plans to continue training security forces in Afghanistan.

NATO wrestles with internal divisions ahead of Warsaw summit

The alliance is struggling to assemble four battalions to safeguard its eastern flank from a possible Russian attack. In addition, many member states are falling short of their financial commitments to the alliance. (02.06.2016)

NATO urges members to stand up to 'Russian military assertiveness'

NATO has urged member nations to stand up to what it calls "Russia's military assertiveness." The head of the military alliance has also pledged to strengthen the alliance's forces along its eastern borders. (30.05.2016)