NATO wrestles with internal divisions ahead of Warsaw summit | Europe | News and current affairs from around the continent | DW | 02.06.2016

NATO wrestles with internal divisions ahead of Warsaw summit

The alliance is struggling to assemble four battalions to safeguard its eastern flank from a possible Russian attack. In addition, many member states are falling short of their financial commitments to the alliance. 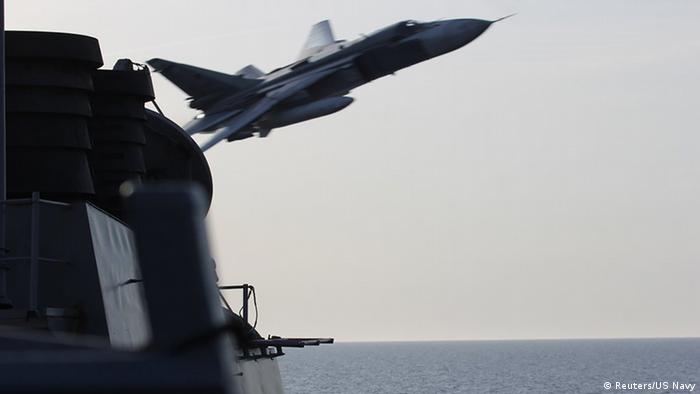 NATO's 28 member states are struggling to come to a consensus on how to effectively deploy the alliance's military assets, little more than a month ahead of a leaders' summit in Warsaw. On Thursday, NATO Secretary-General Jens Stoltenberg will meet German Chancellor Angela Merkel in Berlin to discuss the agenda of the upcoming summit in Poland.

In the past two years Russia has annexed the Crimean peninsula, seemingly instigated a separatist movement in Eastern Ukraine and launched or backed aggressive airstrikes inside Syria that killed countless civilians.

"Strengthening and modernizing NATO's defense and deterrence posture will be at the heart of the Summit," according to a recent NATO statement. "Allies will also assess the long-term implications of the crisis on NATO's relations with Russia and consider the next steps."

That includes "further decisions on an enhanced multinational forward presence in the eastern part of the Alliance," the statement adds.

"We are strengthening our collective defence not to provoke a conflict but to prevent a conflict," he said during a joint news conference with German Chancellor Angela Merkel. "We are not in a new Cold War.

"We do not want confrontation with Russia," he continued. "On the contrary we strive for a more constructive relationship with Russia."

Despite the aforementioned Russian aggression, the alliance appears badly divided about how to respond. The differences stem from a combination of differing histories, geographical locations, and economic difficulties, according to Peter Wijninga, a security expert at the Hague Center for Strategic Studies (HCSS).

"One of the problems is that people in Europe don't realize how serious the threat is," he said. "It's not an imminent threat for Western Europe, but for Eastern Europe it's a clear and present danger.

"If Russia decides to overrun the Baltics, they can do so in a matter of days," he added.

Indeed, it is the Baltic states of Estonia, Latvia and Lithuania - which were annexed by the Soviet Union during World War II and endured a cruel ‘occupation' that consisted of executions and disappearances numbering in the thousands over nearly half a century - that are among the most anxious NATO members.

Poland, the Baltics' next-door neighbor which became a Soviet satellite after WWII, is equally nervous. Last month Poland broke ground on a US-backed missile defense base. The US insists that it would only be able to stop a very limited strike from a so-called rogue state such as Iran, but the Kremlin doesn't believe it - insisting it upends the existing military balance between the old Cold War adversaries.

NATO has agreed in principle to deploy four rotating battalions - each 1,000 soldiers strong - along its northeastern periphery. The US, Britain, and a reluctant Germany have each agreed to lead one multinational battalion. But so far NATO's other major players, France and Italy, are balking at leading the fourth battalion.

Élie Tenenbaum, a defense expert at the French Institute for Foreign Relations (IFRI) in Paris, said that the French military is short on capacity after last November's terrorist attacks in the capital.

"The French army is absolutely overstretched," he said. "There are 10,000 Homeland Security forces that are permanently patrolling the streets of France.

He put France's operational forces at 70,000 and its entire ground troops at 100,000. But due to standard recovery and training rotations, the military is stretched to capacity.

Wijninga, with HCSS, said the problem for Italy appears to be financial. While almost all European economies were hit hard by the 2008 financial crisis, the Italian economy is in the midst of an ongoing economic slide that has seen a steady decline in per capita GDP over the past 10 years.

Its labor productivity is even worse, stuck in a downward spiral for the past 15 years, according to IMF statistics. As a result, Italy is planning further cuts to its already underfunded defense budget. Its latest allotment for military matters represents just 1.5 percent of Italy's budget - a decline from previous years.

Unlike the relatively new threat of an aggressive Russia, the other fundamental crisis facing the alliance is an old one. Under the terms of the NATO charter, each of the 28 member states is supposed to devote 2 percent of its annual budget to defense.

But beyond the United States, which has been trimming its military budget in recent years but still devotes 3.5 percent to defense, only about half a dozen other alliance members are at or near the agreed-upon threshold.

But the experts concur that there is little to be done to force the members to pay up.

"I don't see anything short of an imminent threat will change things," said Tenenbaum, of IFRI. "There is a free-rider mentality as far as defense is concerned."

Wijninga said one mistake the Ukrainians made was to centralize control over Crimea and the Donbass region of Eastern Ukraine. Kiev's aim, he said, was to prevent a separatist movement, but they ended up getting exactly what they wanted to avoid.

He said there is a lesson in that for other eastern members of NATO with large Russian minorities.

"If there's one thing the Baltics should learn from the Ukraine - that is to treat your Russians right," he said. "If they feel mistreated or neglected, then you are giving Mr. Putin an excuse."

NATO to seek fresh talks with Russia ahead of alliance summit

A "broad agreement" amongst NATO ministers has been reached to meet with Russia before the alliance's July summit. The talks will seek to avoid "misunderstandings" as NATO considers a military buildup. (20.05.2016)

Germany is ready to take on a bigger military role to maintain global security, according to a government white paper. The draft document indicates a possible shift away from Germany's postwar era of military restraint. (27.05.2016)

Increased defense spending budgeted by the German cabinet for 2017 has already been called into question. It won't even keep the army functional, according to a Defense Ministry paper quoted by the newspaper "Bild." (21.05.2016)