The prime minister of Estonia wants NATO troops on constant watch in the Baltic States to show "solidarity" and be a "deterrent" to Russia. Meanwhile, Germany's top diplomat has warned of disunity over Russian sanctions. 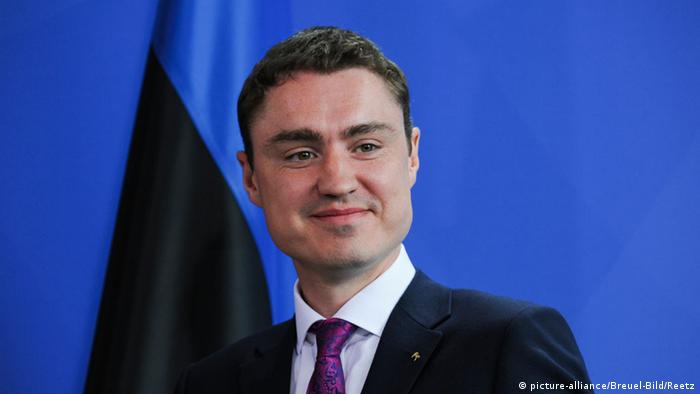 In a wide-ranging interview published in Thursday's edition of German newspaper Die Welt, the Estonian premier called for a NATO battalion to be stationed in each Lithuania, Latvia and Estonia.

"They must be constantly present. There cannot be any gaps. Deterrence has to be the new normality," Taavi Roivas (pictured) said. He said the heightened presence of NATO troops - up to 1,000 in each of the three countries - which was due to be decided upon at a major summit in Warsaw this July, would make clear that the alliance was taking its solidarity pledge seriously.

Roivas said the troops could be rotated and avoid setting up permanent infrastructure so as to avoid falling foul of the military alliance's founding act, in which it agreed with Russia not to permanently station a substantial number of troops in its Eastern member states.

He said Estonia's contribution to NATO missions was large in relation to its 1.3 million population and that it would be difficult to justify those missions in far-flung regions to citizens if NATO did not protect them in return.

In light of Russia's actions in Ukraine, including the 2014 annexation of Crimea, Estonia and neighboring former Soviet-ruled states in Eastern Europe have felt threatened by Moscow. Unlike Ukraine, Estonia and its neighbors are members of NATO as well as the EU, the Schengen border-free travel zone and the eurozone.

In Lithuania's capital, where he arrived Thursday for a two-day trip to the Baltic states, German Foreign Minister Frank-Walter Steinmeier said there was growing resistance in the EU towards extending the sanctions against Russia which were imposed in response to its actions in Ukraine. They are due to run out at the end of July.

"It will be more difficult than it was last year to find a common position on this issue," Steinmeier was quoted as saying by Lithuania's BNS news agency, adding that Germany wanted to keep the sanctions until the Minsk peace deal was implemented.

Estonia's prime minister, Taavi Roivas, called for unity and said the pressure in some European countries, including France, to lift the sanctions should be redirected towards making Russia fulfil the conditions of the Minsk agreement.

"Of course nobody is happy about the sanctions, because they also damage Europe's economic interests," Roivas said, adding "If [Russian President Vladimir Putin] wants the sanctions to be lifted, then there's a clear way for him to achieve that."