Ukraine under pressure to implement terms of Minsk peace agreement | Europe | News and current affairs from around the continent | DW | 10.05.2016

Ukraine under pressure to implement terms of Minsk peace agreement

Most of the provisions of the Minsk II settlement remain unfulfilled, putting mainly Ukraine in a tight spot. Elections in separatist-held territory are at the forefront of diplomatic efforts. 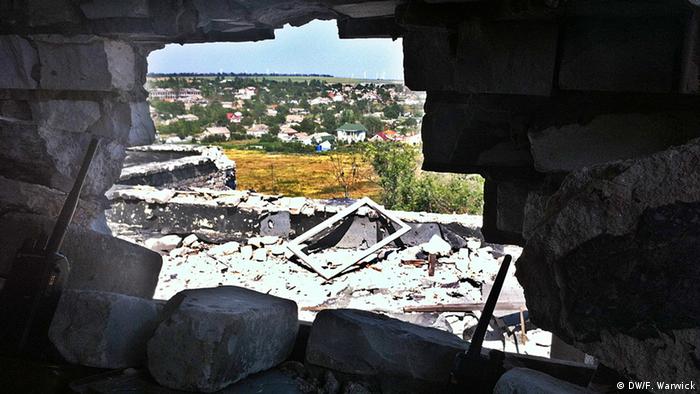 Meetings of the diplomatic group known as the "Normandy Format" are one of the few constants among international efforts to get the peace process for Eastern Ukraine back on track.

On Wednesday, foreign ministers from Germany, France, Russia and Ukraine are meeting in Berlin to discuss the situation once again. According to Germany's foreign ministry, there are two main topics on the agenda: The security situation, including adherence to the ceasefire, and the terms for local elections to be held in Eastern Ukraine.

After the group's last meeting in Paris at the beginning of March, German Foreign Minister Frank Walter Steinmeier could not hide his disappointment. "I am not happy with the way in which Kyiv and Moscow are handling these negotiations," he said. He added that no progress had been made on consultations about the political process.

More than a year has passed since Ukraine and pro-Russian separatists from Donetsk and Luhansk agreed to a settlement containing 13 provisions on February 12, 2015, in Minsk. The settlement is known as Minsk II, because the first ceasefire lasted only a few months. 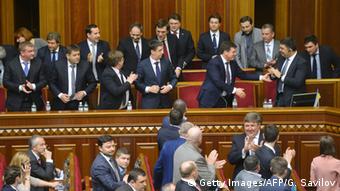 The Ukrainian parliament doesn't have the votes to pass election laws

Today, there are no large-scale battles being fought, but nor is there a total ceasefire. In the days leading up to the meeting in Berlin, fewer shots have been fired and yet Kyiv has reported more deaths among its soldiers. In certain places - such as the former airport in Donetsk - both sides continue to fight as though Minsk II were nothing but a worthless piece of paper.

In April, Alexander Hug from the Organization for Security and Cooperation in Europe (OSCE) said that the situation had deteriorated. The deputy head of the OSCE's mission in Ukraine reported that both sides continue to violate the Minsk II agreement.

Indeed, most of the agreement's provisions remain unfulfilled. The withdrawal of heavy weapons has not been completed, the exchange of prisoners has broken down, and there is still no amnesty for separatists. The OSCE observers have only limited access to separatist regions, and the restoration of Ukrainian border guards along the Russian border appears impossible at the moment. Direct negotiations between Kyiv and Donetsk within the Minsk contact group have come to a standstill.

Russia stepping up repression in Crimea

In an interview with DW, Mejlis Chairman Refat Chubarov explained what the recent ban of his organization means for the governing body of Crimean Tatars. He also criticized Russian authorities.

Russia has staged a large military parade on the Red Square, remembering victory over Germany in World War II. The celebration, marked in numerous ways across the former Soviet Union, sparked scuffles in Ukraine. (09.05.2016)

According to Minsk II, one of the core provisions for a political solution is constitutional reform for Ukraine, to be followed by local elections in the separatist-held regions. The reform is meant to guarantee the autonomy of these regions.

Among other things, this means that the local administration would have influence in naming judges and state prosecutors, and that the so-called "people's militias" would be legalized. Additionally, Ukraine must commit to financing the separatist regions - yet to this day it hasn't done so.

Constitutional reform is the biggest stumbling block for Kyiv. The vote following the first reading at the end of August 2015 was overshadowed by violent protests. The second vote should have already taken place, as under the Minsk agreement, the reform was to have come into effect at the end of 2015. But it has been indefinitely postponed. Observers in Kyiv say that's because parliament doesn't have the majority of 300 votes needed to pass the reform.

The West is now putting pressure on both sides, but mainly on Kyiv. The local elections in the separatist territories are now the focus of many of the discussions. At the end of April, the US diplomat responsible for European affairs, Victoria Nuland, visited Kyiv. She reportedly recommended concrete deadlines to Ukraine, according to the weekly newspaper "Dserkalo Tyschnja." Ukraine is expected to pass a special election law for separatist regions by the end of May, so that elections can be held by the end of August at the latest. But Kyiv denies this: According to the office of the president, there was no discussion of concrete deadlines.

The United States has clearly stated in recent months that it's time for Ukraine to honor its obligations under the Minsk agreement, even if Russia does not. That message is expected to be repeated during US Secretary of State John Kerry's next visit to Kyiv. 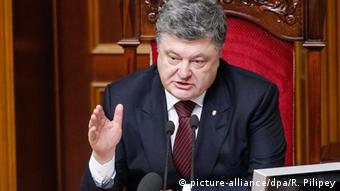 President Poroshenko is under pressure to implement Minsk II

Ukrainian President Petro Poroshenko is now in a tight spot. If he further prolongs the passing of the election law for separatist territories he risks disappointing his Western partners at a time when Ukraine is dependent on financial aid from the West. Some Ukrainian observers are also warning that, should Kyiv prolong the vote, it could lead to a gradual lifting of Western economic sanctions on Russia, something Kyiv wants to prevent. Should Poroshenko cave in to pressure from the West, he risks further damaging his already tattered image at home.

Up until now, Ukraine has always determined the conditions for elections in the separatist regions, including a total ceasefire and absolute freedom of movement for OSCE observers. The OSCE is expected to play a key role in these elections, providing not just observers, but also security personnel. But it's not clear what exactly its mission will entail, meaning it's also likely to be on the agenda in Berlin. The separatists recently postponed their local elections to July 24, although according to the current leader of separatist forces in Donbass, Alexander Zakharchenko, the date is not yet final.