Russia has staged a large military parade on the Red Square, remembering victory over Germany in World War II. The celebration, marked in numerous ways across the former Soviet Union, sparked scuffles in Ukraine. 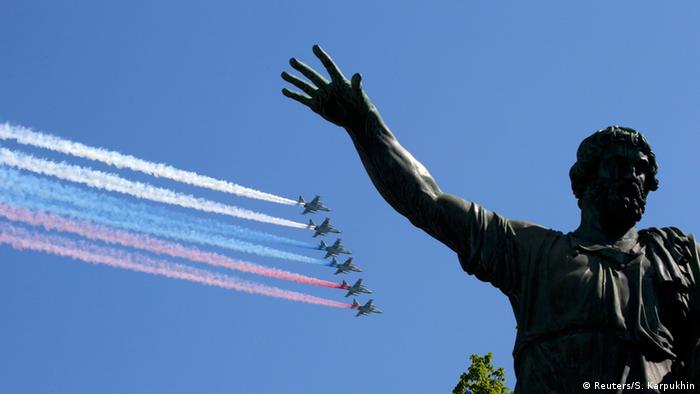 Russian President Vladimir Putin led the nation in a minute of silence for some 26 million Russians killed during the war, opening the hour-long parade in Moscow on Monday.

The celebration marks the 71st anniversary of the end of WWII, which is "both a state holiday, and a personal, family holiday" in Russia, Putin said.

"This holiday has became a symbol of kinship between Russia and her people. In this closeness, in loyalty to the Motherland lays our power, confidence and dignity," he added.

Speaking from Red Square, in front of the Kremlin, the Russian leader also warned against the "global threat" of terrorism.

"We need to defeat this evil, and Russia is open to joining forces with other countries," he said, adding that Moscow was ready to help create an international security system that transcends military blocs.

Putin also described Russian victory over Nazi Germany as a "stern warning to those who might want to test our strength."

Over 10,000 Russian troops took part in the traditional Victory Day parade, according to the Russian defense ministry. The military also displayed advanced missile and artillery systems, and new models of tanks and armored vehicles. The column of armored vehicles, however, was led by the Russian WWII staple tank T-34.

The celebration concluded with dozens of warplanes and helicopters flying over the Red Square.

In addition to the central parade in Moscow, similar events were held across Russia and the former Soviet Union, but also in the Russian military base in Hemeimeem, Syria.

Rebel-controlled regions in eastern Ukraine also marked the anniversary by holding military parades, and some 15 thousand people took part in the celebration on the streets of Russian-controlled Sevastopol, on the Crimean peninsula.

In Kyiv, a group of about 1,000 people also laid wreaths to a WWII memorial for Victory Day. However, they were heckled by a group of youths flying a flag of the Ukrainian Insurgent Army, an armed faction that fought Soviet troops in during the war. The group also scuffled with the police.

At least two people were injured during a fight in the Ukrainian city of Kharkiv, after young Ukrainian nationalists attempted to grab memorial ribbons and flags from a pro-Russian group near a wartime monument.

For Germans, VE Day is both a day to remember the victims of fascism and a time to celebrate liberation from fascism. At one time it meant defeat. (08.05.2016)

Russia shows off military might in massive VE Day parade

Thousands of Russian troops have marched in a huge military parade in Moscow, celebrating the defeat of Nazi Germany 70 years ago. President Vladimir Putin used the event to call for "equal security for all states." (09.05.2015)