Amid high security measures, French President Francois Hollande has led commemorations in Paris to mark the end of World War II in Europe 71 years ago. Russia marks the anniversary of the surrender a day later. 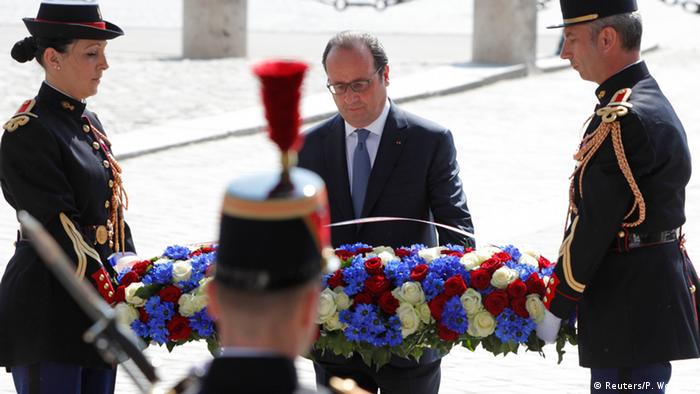 Hollande began the proceedings Sunday by laying a wreath at the statue of Charles de Gaulle, the former president and leader of the French WWII government-in-exile. He then observed a minute of silence before a band played the French national anthem.

A cortege followed the French leader up to the Arc de Triomphe war memorial at the Place de l'Etoile. Hollande then laid another wreath and lit the flame at the tomb of the Unknown Soldier, where another moment of silence was held.

In a speech aimed at younger generations, Hollande urged them to remember "what happened in history and that it can happen again in the future." "Unfortunately, war is also on our doorstep," Hollande said, referring to bloodshed in Syria and Iraq. "We know war can resurface."

Former president Nicolas Sarkozy, who is now chairman of the conservative Republicains party, also took part in the commemorations.

The news agency Agence France-Press described sparse numbers of spectators, adding that they may have been discouraged by the tight security arranged for the event. Sunday was also a car-free day on Paris' famous boulevard, the Champs-Elysees.

For next year's celebration, Hollande will attend either as France's re-elected or outgoing president. He has yet to confirm whether he will seek a second term in next spring's presidential election. This week he received the lowest rating in an opinion poll since he became president: just 16 percent of those asked expressed confidence in him.

In an interview with France 2 television he commented: "I want the French to be proud of their country, whatever their feelings (may) be regarding (the person) who currently
leads them."

VE Day was also celebrated in several other world cities, including Brisbane, Australia, and New York. In Cologne, Germany, dozens of people gathered at a cemetery for persecuted Jews to mark the occasion. For Germans, VE Day is both a day to remember victims of fascism and a day to celebrate freedom from fascism.

In Europe and the US, Victory in Europe Day is celebrated on May 8 to mark the date in 1945 that WWII ended in Europe following Nazi Germany's surrender of its armed forces.

But in Russia the historic occasion is marked on May 9, as the then Soviet Union insisted that the head of Germany's armed forces surrender personally to Russian leader Joseph Stalin's representative in Berlin. The instrument of surrender was signed in the early hours of May 9.

Last year, Russia staged a massive military parade to mark the 70th anniversary of the end of World War II.