Moldova's prime minister called the president's claims of pro-EU corruption "populist" and out of touch with reality. The two leaders are at odds over whether to ally with Brussels or with Moscow. 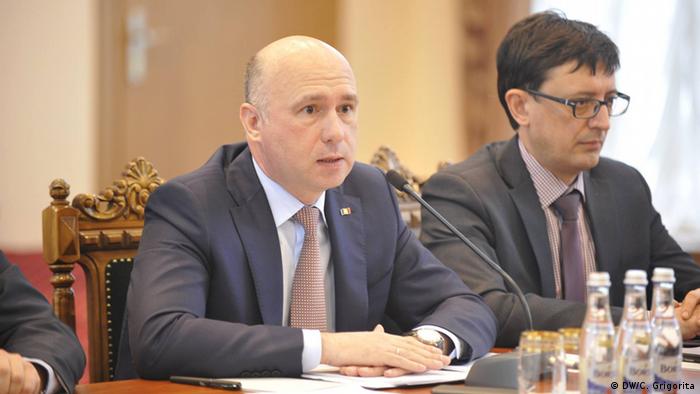 Moldova's pro-European Union Prime Minister Pavel Filip has hit back at comments from the country's president blaming the bloc for the excessive corruption in his country.

In comments to DW on Wednesday, Filip called President Igor Dodon's allegations "populist and unrelated to the reality on the ground."

In an interview with German daily "Die Welt," Dodon had accused Brussels of channeling money to pro-EU politicians in the ex-Soviet nation of 3.5 million inhabitants. The pro-Russian head of state said that the EU had given Moldova some 782 million euros ($835 million) between 2007 and 2015, and that much of it had disappeared into lawmakers' pockets.

"At least one half of that was lost through murky channels. Corrupt members of various, supposedly pro-EU governments in my country have stolen it," Dodon told the newspaper.

"How should German citizens feel, living in their simple apartments, when their tax money goes to corrupt politicians in the Republic of Moldova, who then use it to buy castles in Germany?" he added.

Prime Minister Filip, however, hit back at Dodon's statements, stressing the " respect and appreciation we, Moldovans, have as regards each euro that the European Union is investing in, or helping via assistance, the Republic of Moldova."

Filip told DW that "Moldova is respectful towards the German taxpayer, and my government is committed to all transparency criteria as regards the use of EU money in Moldova. Dodon's comments are populist and unrelated to the reality on the ground."

The two politicians are at odds over what kind of alliance would better serve their nation, one of the poorest in eastern Europe. Filip has tended to pivot West, which Dodon has described as a "big mistake."

Pro-Russian candidates won presidential elections in Bulgaria and Moldova over the weekend. Moscow's growing political influence throughout the region calls for a change in EU and NATO thinking, says Robert Schwartz. (15.11.2016)