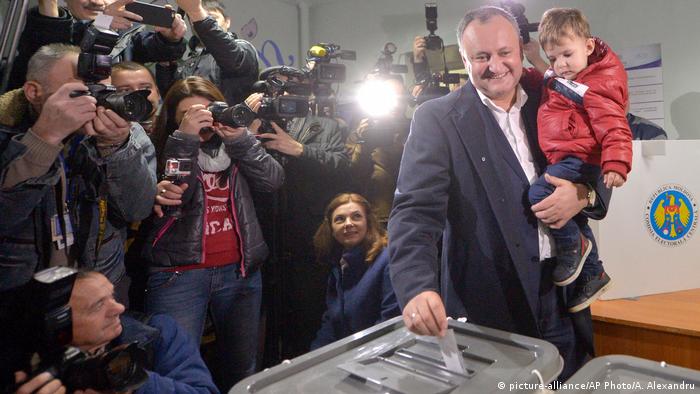 After a campaign filled with promises to restore ties with Russia, Igor Dodon was sitting comfortably on Sunday night with 55.3 percent of the vote in Moldova's presidential election. His rival Maia Sandu, a former World Bank official who ran on an anti-corruption ticket, was polling at about 44.7 percent.

As results came in, Dodon advised his opponent to "urge her supporters to remain calm."

"We don't need destabilization and we don't need confrontation, which somebody is trying to do," Dodon said, speaking in Russian.

"We're all living in one country, in Moldova. The next president should find this balance."

The former economy minister - who served under a communist government between 2006 and 2009 - is calling for deeper ties and increased trade with Moscow.

Sandu, on the other hand, is urging a path toward Europe, calling for the withdrawal of thousands of Russian troops from the Russian-speaking separatist region of Transdniester, which broke away in the early 1990s after a brief civil war.

Dodon's election campaign was also boosted by tapping into the popular anger about corruption under the pro-European government that came to power in 2009 - particularly over the estimated $1 billion (923 million euros) that went missing from Moldovan banks before 2014 parliamentary elections.

That same year, Moldova also signed a historic EU association agreement which resulted in half of its exports now going to the 28-member bloc. Russia bitterly opposed the move and responded with an embargo targeting Moldova's key agriculture sector.

The election results came as nearby Bulgaria voted in Moscow-friendly Rumen Radev in their presidential election. The victory for the Socialist ally triggered the resignation of center-right Prime Minister Boiko Borisov.

Torn between Europe and Russia, Moldovans vote in runoff election

Moldova's pro-Moscow candidate has called for greater ties with its former Soviet ruler, Russia. But his pro-EU rival has made tackling corruption and closer ties with Europe a priority. (13.11.2016)