The Republic of Moldova at a crossroads | Europe | News and current affairs from around the continent | DW | 28.10.2016

The Republic of Moldova will elect a new president on Sunday. Now, for the first time in 15 years, it will be the people who decide. 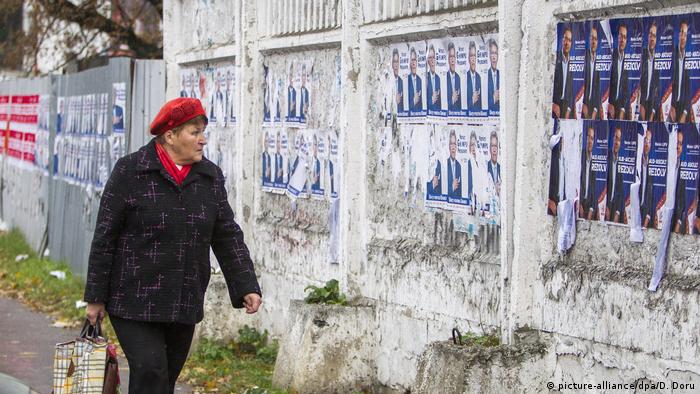 It was the constitutional court that cleared the way for a direct election of the Moldovan president. The court declared the previous method of election by a three-fifths majority in parliament to be unconstitutional. That, it seems, is the only novelty of the October 30 presidential vote. For, as has been the case since the former Soviet republic gained independence 25 years ago, the core question remains: Quo vadis Moldova? A strengthening of ties to Russia, or European integration.

The pro-Russian leader of the Socialist party, Igor Dodon, is leading all opinion polls. The pro-European camp is plagued with infighting, and parties were unable to agree on a common candidate until just a few days ahead of the vote. Ultimately, they tapped Maia Sandu, the former minister of education and one of those spearheading the fight against corruption and the dominance of oligarchs, as their candidate. 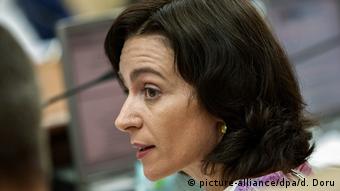 Maia Sandu is regarded as a champion of pro-European reform

When Sandu addressed tens of thousands of Moldovans that had taken to the streets to protest corruption in the summer of 2015, she delivered a clear message. The political scene in Moldova, she said, "is an arena for power struggles among those people who do whatever they please with the country's resources." She told protestors that civil society alone had the power to end the situation and make Moldova once again ready to face the future.

On Sunday, voters in Moldova will have to decide to whom they should give their trust. Known as a staunch defender of pro-European reform, Maia Sandu won't have it easy. Under the guise of following a European course, so-called pro-European governments have ruined the country and driven it into economic crisis. Despite an association agreement with the European Union, the Republic of Moldova is on the brink of collapse. It is thought that the man pulling the strings behind the scenes is the controversial businessman and politician Vladimir Plahotniuc. Many Moldovans - especially those of the younger generation - think that Maia Sandu can free the country from the oligarch's grip.

Turning away from Europe?

Igor Dodon, the leader of the opposition Socialists, sees his political course vindicated. He never tires of repeating his mantra that mismanagement and corruption have been tacitly accepted by the EU for geopolitical reasons. In numerous interviews given to Russian media outlets, he has explained that the association agreement with the EU was a grave mistake. He says that as president he would terminate the agreement and forge closer ties to Russia. 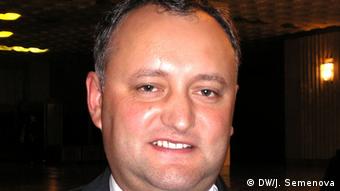 Igor Dodon wants to strengthen his country's ties to Russia

His second main concern is the federalization of Moldova and the integration of the separatist region of Transnistria. The secessionist region "legally" belongs to Moldova, but since 1992 has been a "de facto" breakaway republic and has applied to become a member of the Russian Federation. Meanwhile, about one-third of Transnistria's citizens want to rejoin Moldova. If federalization were to come to fruition, it would mean the end of the Chisinau and Bucharest "Unionist's" vision of reuniting Moldova with Romania.

A third point in Dodon's plan is Moldova's neutrality: he rejects any and all cooperation with NATO. He has repeatedly criticized joint military maneuvers between the Moldovan army and the alliance, and explained that he intends to fundamentally transform the country's security strategy. "We will not tolerate the presence of NATO forces, nor those of any other foreign country on our soil," he says. It comes as no surprise that he fails to mention the presence of Russian troops in the separatist Transnistria region in such utterances.

With 27 percent of the vote, Igor Dodon enjoys a clear lead in the most recent opinion polls. Maia Sandu is in second place with about 10 percent favorability. However, those numbers are misleading because they were taken before pro-European parties decided to back a common candidate in the race. If one adds up numbers from the entirety of the pro-European camp, Sandu would have about 20 percent of the vote. It will not be clear whether that calculation will pan out until Sunday's vote is tallied.

It is also unclear as to whether either of the candidates can actually gain the 50 percent of votes required to win on the first ballot Sunday. Should that not happen, the winner will be determined in a run-off election on November 13. The only thing that is certain at this point is that the situation in Moldova will remain exciting.

On August 27, 1991, while the Soviet Union was in the process of dissolving, the then-Soviet Republic of Moldova declared its independence. A quarter of a century later, the country is still looking for a path to Europe. (27.08.2016)

A new round of so-called "5+2" talks aimed at finding a solution to the crisis in Transnistria have not brought the warring parties closer together. However, the OSCE, currently chaired by Germany, remains confident. (03.06.2016)