Pro-Western officials in Moldova stole hundreds of millions of EU aid in recent years, the country's president told "Die Welt" daily. He urged closer ties with Russia and said focusing on the West was a "big mistake." 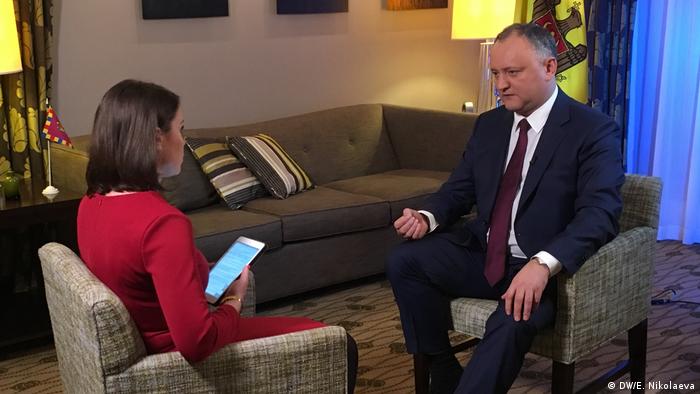 Torn between Europe and Russia, Moldovans vote in runoff election

Moldova's pro-Moscow candidate has called for greater ties with its former Soviet ruler, Russia. But his pro-EU rival has made tackling corruption and closer ties with Europe a priority. (13.11.2016)

Opinion: Is Moldova's European dream over?

No candidate won an absolute majority in Moldova's presidential election. Now there will be a runoff. The result is a major challenge for pro-European forces, says DW's Robert Schwartz. (01.11.2016)

Brussels needed to do much more to control the flow of Western money in Moldova, President Igor Dodon told the Wednesday edition of the German paper.

"At least one half of that was lost through murky channels. Corrupt members of various, supposedly pro-EU governments in my country have stolen it," he said in an interview published in German. In his previous role as a head of an opposition party, Dodon "repeatedly raised the issues with the representatives of Brussels, but the EU-Commissionaires in charge of this were not concerned," he said.

Moldova, a Romanian-speaking landlocked state of some 3.5 million, is among the poorest countries in Eastern Europe. The 42-year-old Dodon assumed office in December last year, after winning the election on a pro-Russian platform.

The Chisinau government, however, remains dominated by pro-Western factions. The cabinet concluded an association agreement with the EU last year.

Despite the aid, political agreements and visa liberalization granted by Brussels, the approval rate for the EU sank from 70 to 38 percent in the last 10 years, Dodon said in his interview.

"This happened because the money did not reach the people. Our citizens have seen various pro-Western governments entangled in corruption scandals," he said.

Republic of Moldova: Escape Route to the West

Such exploits were partly financed by German taxpayers, the president pointed out.

"How should German citizens feel, living in their simple apartments, when their tax money goes to corrupt politicians in the Republic of Moldova, who then use it to buy castles in Germany?" he asked.

Focus on the West a 'mistake'

Commenting on the Association Agreement with the EU, Dodon said that he would like to renegotiate the terms of it with Moscow's participation. He also lauded the Eurasian Economic Union (EEU), an international free trade organization dominated by Russia.

"Personally, I believe that we would benefit more from tighter relations with the Eurasian Union. Moldova would profit from entering EEU in the long run," he said.

Chisinau should work both with the East and the West, according to Dodon.

"We have been focusing exclusively on the West in the last seven years. That was a big mistake," he said. "We need a strategic partnership with Russia."