Mexico ranks third in the world in coronavirus deaths, behind only the United States and Brazil. Experts say a lack of testing, combined with an unfocused approach to tackling the pandemic, has only made things worse. 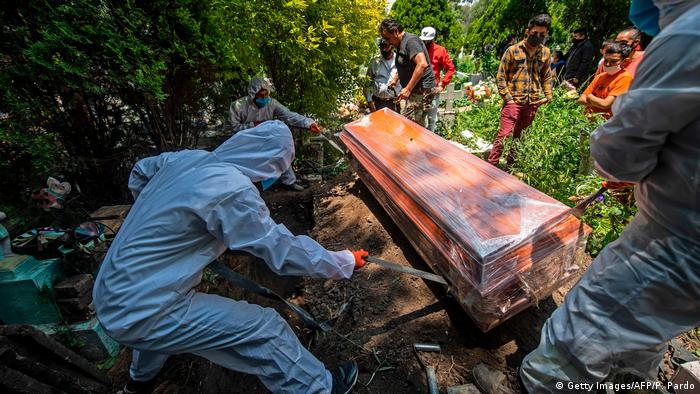 Mexico's COVID-19 response has become the stuff of memes. A popular one making the rounds on social media shows chief epidemiologist Hugo Lopez-Gatell surrounded by a cheering crowd (represented by characters from The Simpsons) and the words "The peak of the pandemic will be next week! (It doesn't matter when you read this tweet)."

Internet users and health experts alike have been critical of the government's approach to managing the pandemic. At first, the government played down the COVID-19 outbreak, said Julio Frenk, Mexico's health minister from 2000 to 2006. He told DW that when that didn't work, the government decided to use mathematical simulations to study the infection process, rather than start testing for the virus.

This ineffective approach has been combined with a mixed message on face masks: Lopez-Gatell initially described them as unnecessary, before eventually recommending their use, while President Andres Manuel Lopez Obrador still rejects them to this day.

"People mistrust the government and only go to hospital when it's already too late," said Frenk, now the president of the University of Miami.

The latest statistics show that Mexico is moving steadily into the group of countries most affected by COVID-19. More than 525,000 people have been infected as of August 18, and at least 57,000 people have died.

Since early July, about 5,000 people have been infected with the coronavirus every day, according to official figures. On Tuesday, however, the Health Ministry reported a 20% decline in fatalities in the past week, compared with the previous seven-day period. Lopez-Gatell said the number of new daily cases and deaths had begun to diminish, telling reporters that the epidemic in Mexico was in a "sustained decline." 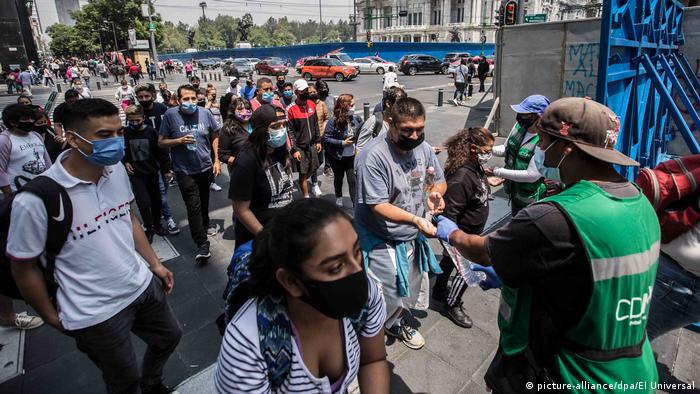 Most Mexicans are wearing face masks, even though their president thinks they're useless

But the country still ranks seventh in the world in terms of infections and third when it comes to fatalities, after the world's hot spots of United States and Brazil, where nearly 110,000 people have died due to the virus outbreak in the South American country.

"In the coronavirus crisis, Mexico is actually just as badly off as Brazil," said Malaquias Lopez-Cervantes, head of the sociomedical research unit at the National Autonomous University of Mexico.

At 11.9%, the number of deaths in relation to those infected is almost twice as high in Mexico as it is in Brazil, according to a study by Johns Hopkins University. World Health Organization figures show that Mexico ranks only behind Italy (14.5%) and the United Kingdom (14%).

Chief epidemiologist Lopez-Gatell has argued that Mexico's figure is only so high because the country tests so little. In other words, if more people with weaker symptoms were tested, more recovered patients would appear in the statistics, reducing the fatality rate.

But health experts have said this is a weakness in Mexico's strategy. The government's mathematical model is of little use, said Frenk, adding that the country is "flying blind" without more testing. Expanding testing capacities and tracking infection chains, two approaches that have been successfully implemented around the world, are not part of Mexico's plan.

The fact that neither have been applied in Mexico may be because the government is following a strict austerity program and is reluctant to spend money on wide-scale testing, said Lopez-Cervantes.

The pandemic hit Mexico amid a "tumultuous restructuring process," said Frenk, adding that health authorities have been bled dry by the pressure to cut costs. In addition, the country's former national health insurance scheme has yet to be replaced.

President Lopez Obrador appears to be pinning his hopes on the belief that herd immunity will kick in once 70% of the population has been infected, or the promise of a vaccine in the near future — Mexico, along with Argentina, plans to produce a potential vaccine with pharmaceutical company AstraZeneca for much of Latin America. But both are unlikely to happen this year, said Lopez-Cervantes.

Coronavirus czar Lopez-Gatell, meanwhile, has put the blame on Mexicans themselves for the high fatality rate, pointing out that they are overweight and suffer from high blood pressure and diabetes due to excessive sugar consumption. Both factors increase the chances that someone will die of COVID-19. "Shifting the blame to the victims — a classic maneuver used by populist governments," said Frenk.