Food banks are a lifeline for Mexico's needy, and never more than during the current COVID-19 pandemic. But with a recession looming, they are at risk of losing donations, as Sandra Weiss reports from Puebla, Mexico. 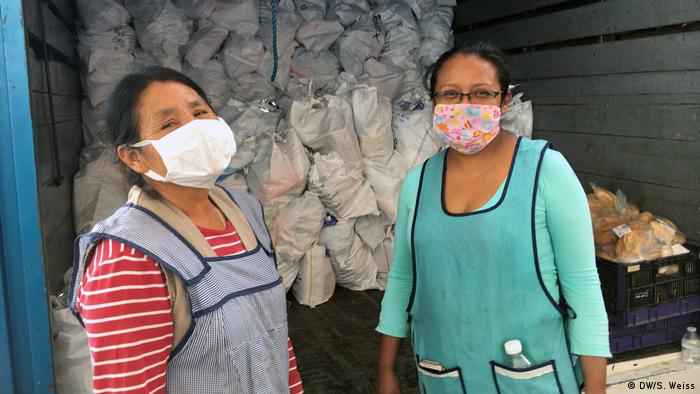 Every Friday, early in the morning, Arsenia Cortes packs two huge nylon bags in her worn backpack and sets off on her journey. It takes the 47-year-old Mexican a full hour from her village of Amozoc to the provincial capital Puebla, and she has to change buses twice.

The trip costs 35 pesos, around €1.50. Although she has to count every centavo, she does not skimp on these trips. Her destination: the Food Banks of Mexico (BAMX), a charitable foundation. The organization has branches all over the country. The one in Puebla is housed in a large, unadorned concrete block, in an industrial area right next to the highway.

"Without the food bank, I wouldn't know how my family would make ends meet in this crisis," says the mother of three teenagers as she waits in line outside the building. "Business is bad."

Cortes sells cosmetic products from door to door. Her husband works in a blacksmith's shop that has had hardly any orders since mid-March. She used to have to call the food bank for help only once a month; now she comes once a week.

Read more: Mexico chooses its own path to stem economic fallout of pandemic 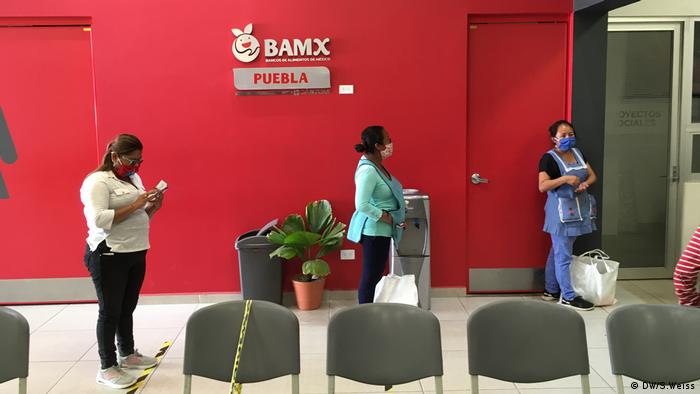 Many people make long journeys to visit the food bank

More people to care for

In the ground floor office, Pedro Mayoral is explaining his situation to a social worker. He is registering for the program for the first time. "I make a living selling used clothes," says the 72-year-old. "But now my income is gone, and I don't know what to do," he adds, visibly ashamed of himself, before setting off on the half-hour walk back home. According to the government, three-quarters of a million Mexicans have already received bridging loans — but it's a drop in the ocean, and millions like Mayoral and Cortes are falling through the holes in the net.

The number of people receiving aid from BAMX has reached an all-time high due to the COVID-19 pandemic, says director Miguel Rojas. Last year, this food bank network supplied 1.3 million people throughout Mexico — in May, the number jumped to 1.6 million. In Puebla, 130,000 people were registered as recipients in January, and now there are 160,000. Rojas expects that number to grow to 200,000 in the coming months. "That will be a challenge because we will need to get more donations to cope," Rojas says. 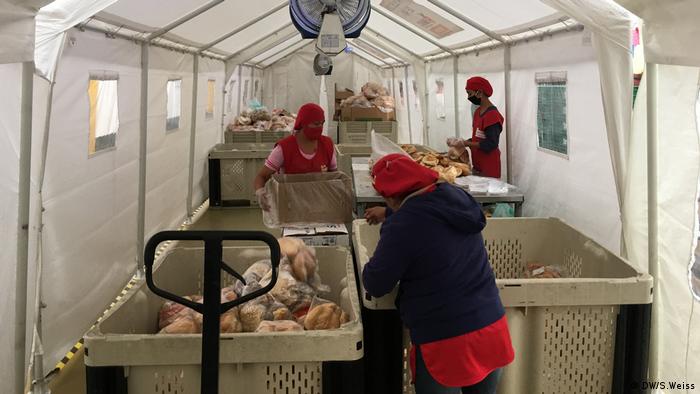 Donations are adequate for now, but they may not last much longer

One of the largest and most modern offshoots of the network is in Puebla, where half of the 6 million inhabitants live in poverty. Its large warehouse is full of hustle and bustle, all under the supervision of Eric Limon. Limon, the head of logistics, keeps a record of what goes in and how much goes out. "In February we delivered 1,500 food parcels a day; now it's almost 3,000," he says.

This was not the only reason the director, Rojas, had long days and short nights: After the pandemic broke out, the food bank also had to establish new hygiene standards in record time.

Now there is a mobile sink with soap in front of the entrance. All visitors have to walk over at least two disinfection carpets and through a tunnel where they are sprayed with disinfectant. Temperatures are measured at the entrance, masks are compulsory for everyone and yellow-and-black crosses on the floor mark the spots where people are to wait to ensure the stipulated distance between them. In addition to gloves and their red work gowns, the volunteers wear aprons that are washed on hot every evening.

Those receiving aid are encouraged to form groups so that the assistance can be provided collectively. Where this is not possible, deliveries are made or local parishes help out. "Organizing the recipients has always been an important part of our work to strengthen social cohesion," says Rojas. 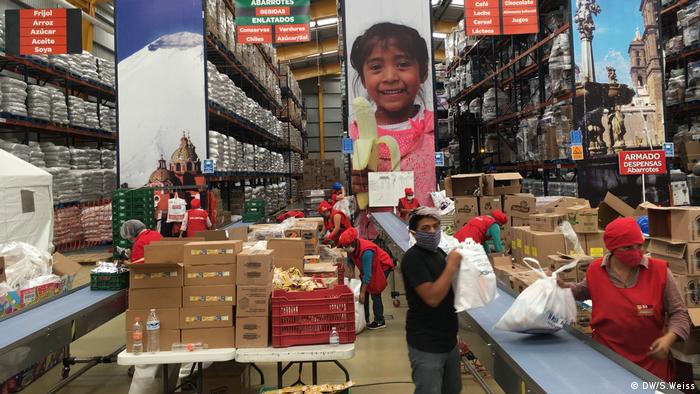 The food bank in Puebla support some 160,000 people

This has worked well for Angelina Alvarez and Janeth Melchor. The two women come from Patria Nueva, 26 kilometers (16 miles) southeast of Puebla. Two hundred and thirty-three families in their farming village are registered at the food bank. "We all chip in and rent a van every Friday to pick up the food," Alvarez says as she lifts packages onto the load platform. "Now, with the crisis, there is more need, but there is just not enough room in the delivery van," the 58-year-old says.

The list of donors is long. Supermarkets, wholesale markets and restaurants are at the top of the list. They mainly donate perishable food and food that is close to its expiry date. Donations in kind and money also come from industrial and manufacturing companies, universities or the local football club. But the looming recession is putting a big question mark over the amount of donations in the next few years.

So far, BAMX has mostly focused its attention on the 8% of the people in Puebla who live in extreme poverty. During the pandemic, however, the organization is also trying to stop other families from going the same way, says Rojas. That is because those who live below the poverty line for too long suffer in terms of health and their children fall behind in education. This often turns temporary poverty into a permanent trap.

In an effort to slow the COVID-19 pandemic, Colombia has been in lockdown since the end of March. This has led to suffering and hunger amid the poor, who are struggling to keep their heads above water. (15.05.2020)

Superman, Batman and now Susana Distancia! Mexico is trying a novel approach to try and get its citizens to listen to coronavirus health advice and it looks like she's caught people's attention. (21.03.2020)

Charities unite to help the most vulnerable in Argentina