Mexico chooses its own path to stem economic fallout of pandemic | Business| Economy and finance news from a German perspective | DW | 27.05.2020

Mexico chooses its own path to stem economic fallout of pandemic

More than a million jobs are likely lost during the coronavirus crisis in Mexico, with the important auto industry expected to take the worst hit. But Mexico's leftist president is optimistic he can cushion the blow. 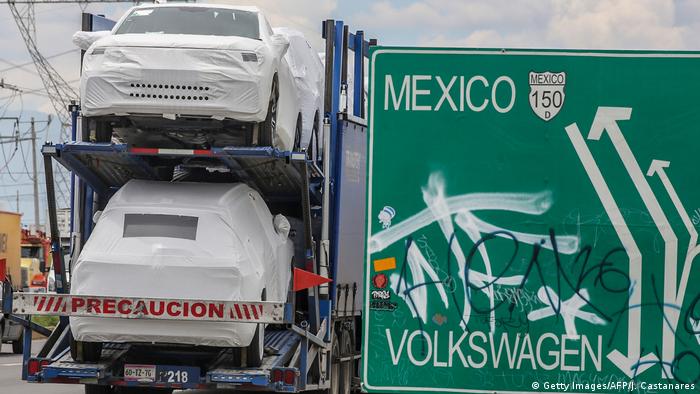 German carmakers Volkswagen and Audi are experiencing difficult times in Mexico these days. Just last week, initial hopes of reopening their sprawling manufacturing sites in Puebla were dashed by the authorities of the Mexican province.

The virus situation in Puebla "doesn't allow for a resumption of activities in the automobile and construction sectors," the authorities on the ground decided on Friday, adding that the number of new infections would first have to come down.

The global COVID-19 pandemic reached the Northl American country at the end of March, bringing Mexico's economy to a virtual standstill and shutting down the country's most important industry, car production.

Global auto giants BMW and General Motors have been luckier with their production sites in the province of San Luis Potosi, where authorities granted them a gradual return to normal production amid better infection numbers.

The gradual restart of car production in San Luis Potosi is said to have come after mounting pressure from the United States, where auto bosses reportedly used their influence with Washington to exert pressure on Mexico's leftist president, Andres Manuel Lopez Obrador.

Mexico is one of the most important hubs of the automobile industry on the American continent, with the US car industry in particular using the country as a low-cost location. 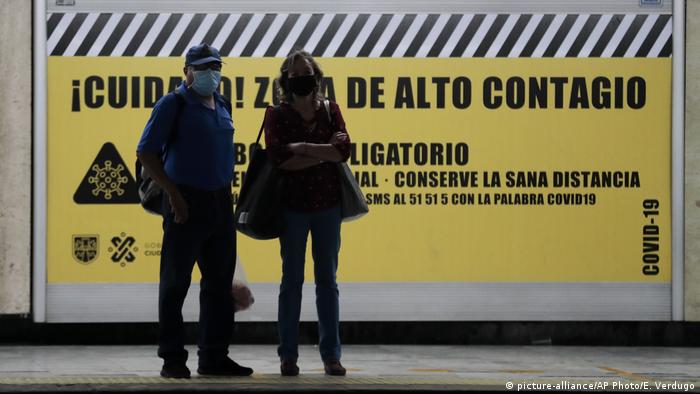 Commuters wearing masks against the spread of the new coronavirus wait in front of a sign that reads in Spanish "Attention! High contagion zone" at the Pino Suarez subway station in Mexico City

After the coronavirus-caused shutdown, car exports from Mexico to the US plunged 80% in April, while deliveries to other global car markets dropped 75%. Mexico's oil exports also fell amid the outbreak of the pandemic, down by two-thirds, and other goods exports came in 40% lower.

Small wonder that Mexico's foreign trade balance showed a massive $3-billion (€2.72 billion) deficit in April — the widest on record for the month.

But bad news continues coming in for AMLO, as President Lopez Obrador is caringly called among his leftist supporters. According to preliminary estimates, stifled economic activity will cost about 400,000 jobs in May, causing pandemic-induced job losses to rise to almost 1 million.

But AMLO sees a silver lining amid all the gloom and doom surrounding Mexico's economy. The recovery was already gathering momentum, he said in a recent video message spread on social media channels. A main reason for his hope was tax income for the state which "didn't fall in April."

Declaring this "a miracle," the president said economists were even expecting revenue from taxation to rise by 2.6% in May, compared with the same month in 2019. Among the other positive data supporting Mexico's economic revival, AMLO cited a rise in remittances from Mexican expats living in the US, which reached an all-time high of $4 billion in March, despite an emerging US jobs crisis that has put 38 million workers out of their jobs so far.

But Mexico's president also renewed his call for vigilance amid the pandemic, urging the population to maintain discipline and observe the rules. Since the COVID-19 pandemic reached Mexico, authorities have registered 68,000 infections, but the death toll of about 7,400 suggests that the real figure may be even higher. The critical phase was yet to come, Lopez Obrador said, especially in the country's capital, Mexico City.

Surprisingly though, AMLO appears to remain fully confident he can reach his goal of creating 2 million jobs this year. "I want to stress that we already have a plan," he said to dispel growing public concern about the huge job losses expected to reach 1 million during the pandemic.

Apart from that, the government wants to boost spending on the big infrastructure projects it has launched, including the Tren Maya cross-country rail link, the Dos Bocas refinery project and Mexico City's Santa Lucia airport.

"Additionally, we are seeing our economy rebounding again as crucial sectors like construction, mining and automobiles are gradually reopening," AMLO said, adding that the current recovery in the price of oil and in the exchange rate between the Mexican peso and the US dollar would also help the economy. 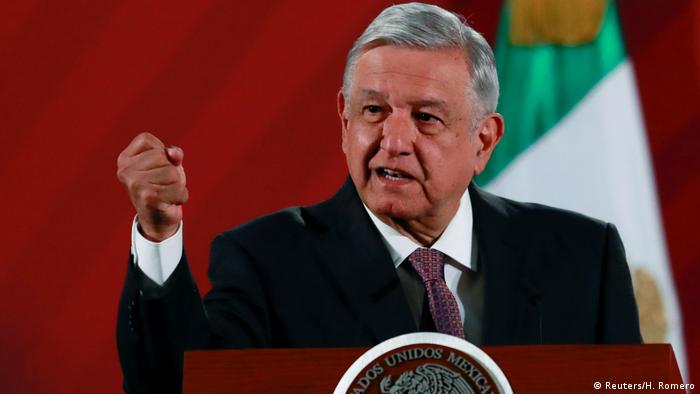 Mexico's business leaders, however, are far from being content with the president's plan to deal with the crisis. The country's employers' federation Coparmex last week demanded a change of policies, urging AMLO to do more in support of struggling businesses and for saving jobs.

Coparmex renewed a call for direct government aid to companies and an end to austerity measures. "It's about time the government broke its piggy bank and do something for the working people and against their fears of losing their jobs," the federation said in a statement. The organization urged AMLO to drop his "indifference" toward firms going bust, and to launch a "crusade in defense of employment."

But Lopez Obrador rejected such criticism saying Mexico's history was full of examples where employers had misused government rescue packages to serve their own selfish interests.

After winning a landslide victory in the 2018 presidential election in Mexico, AMLO introduced fiscal policies including both massive cutbacks to government expenditure and increased social spending.

In the current pandemic, he defended his approach, underscoring the ongoing need for microcredit loan programs and social initiatives. "We've been providing 752.000 loans worth a total of 45 billion pesos [$2.03 billion, €1.84 billion] so far," the president said and announced that the current program would be extended to reach 4 million individual loans to small businesses.

What he described as "the Mexican model" would lead the country out of the crisis through a combination of "a revitalized economy and welfare programs." At the same time, AMLO lambasted the previous neoliberal economic policy by his conservative predecessor.

"The recipe that was applied is the same everywhere. It comes your way as structural reforms and actually means cuts in taxation, energy, labor and education. This, at least, is no longer acceptable in Mexico," he said, announcing that Mexico would press ahead with its own model of development based on its specific economic realities.

"We will no longer focus on economic growth only, but also pay attention to the well-being of our people and progress toward democracy and freedom," he added.