A number of Mexican firms producing goods for the US market are ignoring coronavirus lockdown rules. This puts their workforces in grave danger of contracting COVID-19. 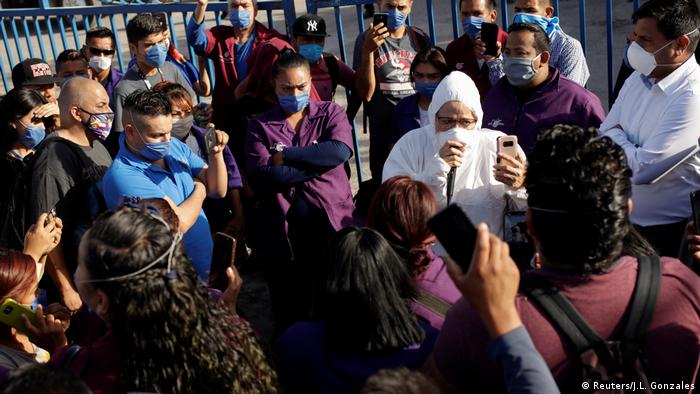 Groups of workers employed in north Mexican factories are depicted in the footage, with poor quality audio, protesting at the factory gates.

Employees throw down work clothes at the feet of their foremen in response to the news that they must keep working — despite the danger of contracting the coronavirus.

Laborers at factories in Tijuana manufacturing for Hyundai, Roger's, Carso, Safran, Hisense and Ontex have all staged protests in recent days, according to journalist Alfredo Alvarez.

Speaking to DW, Luis Hernandez, who heads the Manufacturing and Export Industry Association (Index) in the Mexican state of Baja California, said 60% of the region's 1,200 suppliers have shut. He said there have been issues with about 20 companies where "employees see the pandemic as an opportunity to go on paid leave."

Officially, only essential business are permitted to stay open in Mexico. Yet many Mexican factories that assemble, manufacture, or process goods to be exported to the US have kept up production nonetheless. Alfredo Alvarez has reported that laborers have been told they will be fired unless they show up to work.

This refusal to heed the lockdown has had the gravest consequences, with 20 workers reported to have died from the coronavirus — 13 of them in a factory producing car parts for Lear Corporation in the city of Ciudad Juarez. 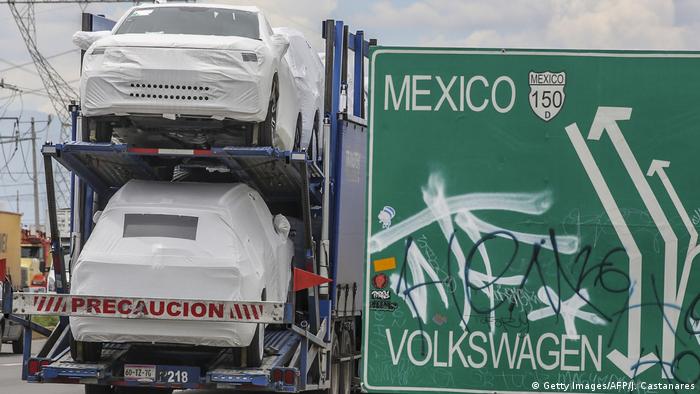 Mexican firms depend heavily on trade with the United States, which in turn can exert substantial political pressure

The Los Angeles Times has reported that Lear Corporation's health department became aware of COVID-19 cases among its workforce in late March, handing out pain killers to those infected and demanding they return to work. Apparently, other companies are being similarly careless with their workers.

On Wednesday, for instance, a spokesperson for Surgical Specialities, which manufactures medical products, confirmed that two workers at the firm's Tijuana site had died from coronavirus infections.

The factory has been allowed to keep up production as medical products are considered essential. But laborers have reported that the workforce present at the factory has not been thinned out to 50%, as stipulated in the guidelines. Index now recommends that companies install thermal testing facilities at factory gates to detect possible coronavirus infections among workers. So far, only one company has followed this advice.

Millions of jobs at risk

Pressure to keep up production, meanwhile, not only stems from Mexican companies but also US demand. Christopher Landau, the US ambassador to Mexico, tweeted that he would do everything in his power to keep supply chains up and running. In Mexico, meanwhile, some seven million people are employed in the manufacturing sector, which comprises two thirds of all Mexican exports.

But Mexico and the US do not always agree on which sectors are essential. While the former only classifies food producers and health care product manufacturers as crucial, the US also deems the aerospace and arms industry indispensable.

This is not always a straightforward call to make. While Mexico's lighting industry considers itself a key sector for security reasons, Baja California governor Jaime Bonilla closed a factory run by US company Copper Lightning. And Industry Representative Hernandez fears that unless Mexico and the US come to an understanding soon, supply chains will disintegrate.

Governor Bonilla, a member of the ruling Morena party, has in fact shut down a range of factories refusing to comply with lockdown rules. One reason, presumably, is that region's hospitals are already at maximum capacity. Speaking to journalists, he criticized that "firms are out to make more money, even though they are risking their workers' health." The state of Baja California has seen the third-highest number of coronavirus infections across Mexico. So far, 975 people have tested positive for the virus, and 133 have died. Valdez has, however, signaled he might consider lifting restrictions, saying he was closely monitoring developments in the US, where production sites are continuing to operated under certain conditions.

Superman, Batman and now Susana Distancia! Mexico is trying a novel approach to try and get its citizens to listen to coronavirus health advice and it looks like she's caught people's attention. (21.03.2020)