Drug cartels in Mexico have been handing out food to people in need during the coronavirus pandemic. The organized crime networks are vying to maintain and even grow their influence. 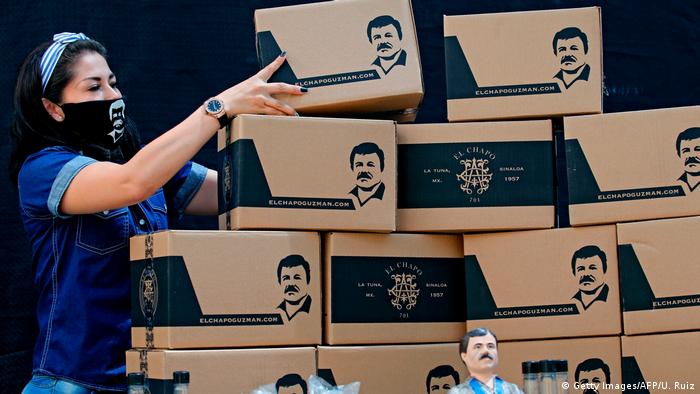 Alejandrina Guzman, the daughter of Sinaloa cartel boss Joaquin "El Chapo" Guzman, has distributed boxes with groceries to elderly and impoverished people who lack food during the coronavirus pandemic while her father sits behind bars in the United States. Media in Mexico have labeled the donations "Chapo food parcels."

Guzman owns the El Chapo 701 fashion brand, registered in the state of Jalisco, which specializes in narco-themed apparel. Online media platforms have broadcast footage of her filling cardboard boxes bearing the El Chapo 701 logo with toilet paper and rice for distribution to people in need. Her helpers then swarm to deliver the donations.

El Chapo's daughter isn't the first cartel figure to engage in such altruism in Mexico. In recent days, numerous gangs have made the news by distributing care parcels to impoverished people. Authorities have been largely powerless to stop them. Parcels were handed out in the city of San Luis Potosi by the Jalisco Nueva Generacion cartel, and Mayor Xavier Nava had no legal means to stop the unarmed civilians from doing it.

"Mexico isn't facing a humanitarian crisis or a shortage of goods," Falko Ernst, an analyst with the Crisis Group whop focuses on Mexico, told DW. "Mexican cartels are using the current situation to strengthen their social base," he said. Food parcels are present a more effective opportunity to do that than violence, he added. "Cartels have limited resources at the moment, and a turf war is costly."

In March, 2,585 people were murdered in Mexico — making it the bloodiest month in the nearly decade-and-a-half drug war. Jose Reveles, a journalist who specializes in reporting on the narco trade, called the aid a cartel "propaganda strategy, aimed to show their presence." He said violence and benevolence both serve the same purpose for cartels: to exert their influence on the territories they seek to control as they face competition from the government, as well as rival criminal organizations.

The cartels are capitalizing on the fact that Mexico's social welfare programs are inefficient, don't cover everyone and are politicized. Ernst calls the lack of a safety net "deeply worrying" and said the government " will soon have an even bigger security problems on its hands" should it fail to intervene and provide services for people in need.

Mauricio Merino, a professor at the Center for Research and Teaching in Economics, would like to see President Andres Manuel Lopez Obrador institute a universal basic income for that would cover 68 million of Mexico's 126 million people for the next six months. Merino said the president, affectionately called AMLO by his supporters, should abandon projects such as building a refinery in Tabasco with the stated goal of reducing Mexico's dependence on foreign oil and a train route that would link archaeological sites, with spots popular with tourists and economic centers across the southeast. Obrador, however, rarely brings up Mexico's security situation in his daily press briefings.

The coronavirus pandemic has taken a toll on organized crime groups. Many drug trafficking routes have been severed. Cocaine from South America is hard time come by, as are the chemicals, usually imported from China, needed to produce synthetic drugs. The economic standstill and border closures have also caused a drop in protection racketeering and human trafficking. Now, some cartels can no longer afford to pay their hitmen.

Reveles said Mexico's major cartels might possess enough resources to hang on for several months, however, and possibly take over small groups, as well. He said now would be the time to "to tackle money laundering and try to cut off the big players' money supply." Reveles said he did not believe that the government had gone after cartels with particular determination.

The journalist does not foresee return to the conditions of two decades ago, when a relatively small number of capos controlled the drug trade in Mexico. Reveles said Mexico's crime networks had grown too fragmented for that to happen. But he does see the risk of small, criminal subgroups becoming involved in kidnappings, street crime and gasoline smuggling. That could mean even more violence in Mexico in the medium term.