The new deal is set to replace the North American Free Trade Agreement, which US President Donald Trump claimed was unfair. It will come into force on July 1. 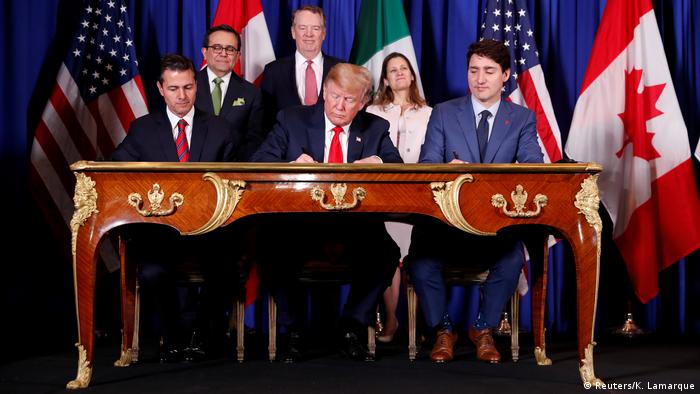 The United States-Mexico-Canada Agreement (USMCA) will come into effect on July 1, replacing the 26-year-old North American Free Trade Agreement (NAFTA), the US Trade office said in a statement.

US President Donald Trump had criticized NAFTA for being unfair towards US business, an assessment in which he was backed by multiple labor unions and economic populists. Even though overall economic output was receiving a boost with new employment opportunities, many believed that some well-paying jobs in the US were being lost.

The new deal has stricter labor laws that could move jobs from Mexico to the US or Canada. It also brings about changes to auto manufacturing, e-commerce, protection of intellectual property and more.

According to the US, it would "deliver more jobs, provide stronger labor protections and expand market access, creating new opportunities for American workers, farmers and ranchers."

The USMCA was signed in November 2018, after Trump threatened to scrap NAFTA without a new deal in place. After some amendments, Mexico ratified the deal in December 2019, following which Trump signed it into law.

The Canadian parliament was the last to adopt it in March this year.

US drops steel and aluminum tariffs on Canada and Mexico

The US has dropped steel and aluminum tariffs on Canada and Mexico. The tariffs had stood for just under a year and were part of a bitter trade dispute between the North American trading partners. (17.05.2019)

Washington is looking to fix "chronic" trade imbalances by negotiating trade agreements with the UK, the EU, and Japan, US officials have said. Donald Trump's efforts to cut trade deficit have so far been unsuccessful. (17.10.2018)

With trade talks between the US and Canada set to drag on into a new week, US President Donald Trump has tweeted that Ottawa need not be included in a new NAFTA trade deal. Lawmakers in Washington begged to differ. (01.09.2018)