In an effort to slow the COVID-19 pandemic, Colombia has been in lockdown since the end of March. This has led to suffering and hunger amid the poor, who are struggling to keep their heads above water. 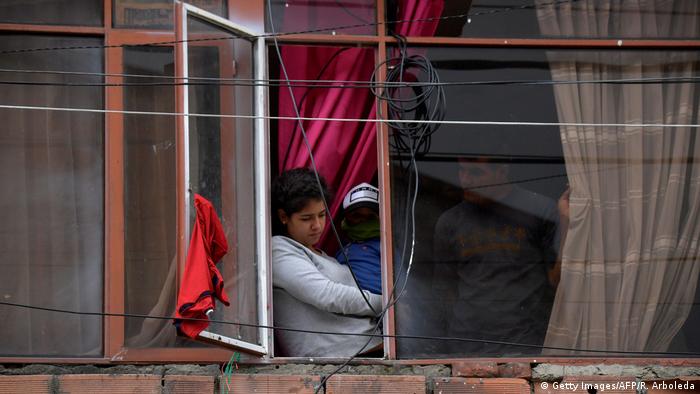 Red rags have become ubiquitous in the slums of the Colombian capital, Bogota. People have been hanging them outside their homes to show that they are hungry and in urgent need of food.

Though the city has distributed food vouchers and some 80,000 aid packages, it hasn't been enough to alleviate suffering in the city, which has a population of about 8 million.

There is a lot of red to be seen in the poor district of El Codito in the city's north. Many locals usually work in the informal sector. They had to stop working from one day to the next when lockdown measures were imposed in late March, to slow the spread of COVID-19. The few who had some savings have used them up by now, and hunger and suffering is spreading.

But along with the red rags, there is also solidarity on display. A group of volunteers has set up a soup kitchen to feed the local population. "These people need our help," said Teofilo Figueroa, one of the organizers. 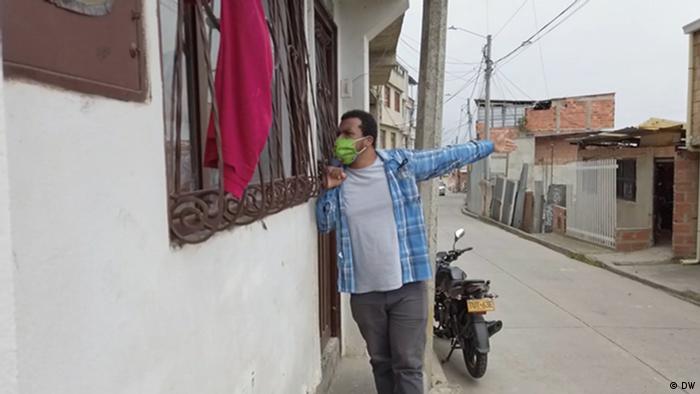 Volunteers invite people from around the neighborhood

Betty Perez, another volunteer, has taken to preparing food in her own kitchen before doing the actual cooking outside in a huge pot, so that locals can come by to get lunch in return for a small donation. Today she's making a dish of chicken, vegetables and rice. She has about 15 kilograms (33 pounds) of food, three of which came from her own aid package.

Another volunteer, Johnathan Cordoba, knocks on people's doors to invite anybody who does not yet know about the initiative to come and grab a bite to eat. He told DW that he had to do something when he saw the red rags. "Of course, I could pretend that I can't see them and that it has nothing to do with me but I think we should all pool our energies together and help each other," he said.

'It shows us that we're not alone'

Some 300 people have lined up, most wearing masks, to pick up a portion of rice and chicken and a couple of potatoes, along with a drink. Lady Viviana Valencia is very grateful: "This neighborhood help is really beautiful, it's from the heart. It shows us that we're not alone." 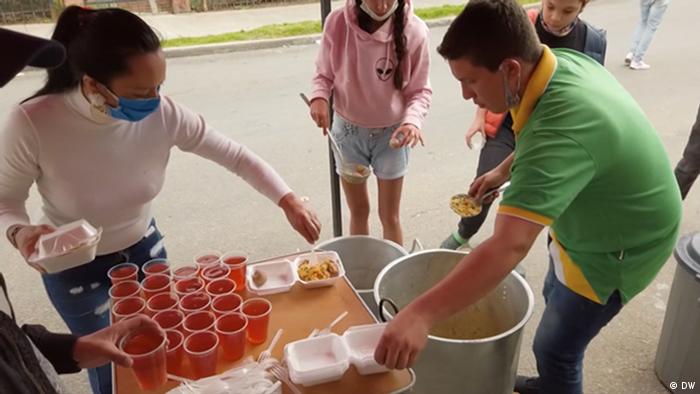 It's not long before there's nothing left in the pots. The volunteers are pleased, but they're also worried about the future. They aren't sure whether they will have enough resources to provide many more such community meals.

Like most, they hope that the lockdown measures will soon be lifted so that people can return to work — and so the red rags can finally vanish.

Felipe Abondano in Bogota contributed to this report.

Scientific models have suggested more people may be infected with COVID-19 in Brazil than in the US. Politicians are divided about what to do, but experts say none has an effective strategy. (13.05.2020)

A number of Mexican firms producing goods for the US market are ignoring coronavirus lockdown rules. This puts their workforces in grave danger of contracting COVID-19. (30.04.2020)

The Colombian capital has seen urban gardening really take off in the pandemic. Over four thousand city gardens are now feeding entire families with home-grown produce. And many of the gardeners are finding their work has therapeutic side effects.