Scientific models have suggested more people may be infected with COVID-19 in Brazil than in the US. Politicians are divided about what to do, but experts say none has an effective strategy.

Since Monday, only half of the automobiles registered in Sao Paulo — Brazil's largest city — have been allowed to drive on its streets. Car owners with license plates ending in an even number are allowed to drive on even-numbered calendar days, and vice versa for those ending in odd numbers.

Administrators hope limiting the number of people traveling on city streets will help slow the spread of the coronavirus. Just two months ago, Sao Paulo Mayor Bruno Covas called for citizens to do just the opposite, lifting weekday limits on traffic — which bar one-fifth of all cars from driving on a given day — in an attempt to relieve the city's public transport system.

Sao Paulo's back-and-forth is emblematic of Brazil's overall approach to the COVID-19 pandemic, says Domingos Alves, a lecturer at the University of Sao Paulo Medical School in the city of Ribeirao Preto. "Brazil has no plan at all. Everyone just acts," Alves says. At this market in Belem, on the northeast coast of Brazil, business continued as usual in late April

Too few tests, too much undercounting

According to official statistics, as of May 11, some 168,331 people in Brazil had been infected with the coronavirus and 11,519 people had died of its resulting disease, COVID-19. However, Alves and his 40-member team of researchers have used scientific models that suggest the true number of infections could be at least 16 times higher. According to Alves' models, that would mean that some 2.1 million Brazilians would have been infected by May 9, more than in the US.

Before he was forced from his post in mid-April, outgoing Health Minister Luiz Henrique Mandetta admitted that the real number of infections in the country was far higher than what was reflected in official statistics. Brazil is among the world's least-tested countries when it comes to COVID-19, and according to the online news site The Intercept, Brazil also uses substandard imported testing kits, which in turn reduce their value in terms of information gleaned. "Official data essentially only tracks hospitalized patients," says Alves, who adds: "There are no serious statistics when it comes to this epidemic."

The poor once again bear the brunt

Brazilian President Jair Bolsonaro likely feels that is the right approach to the current pandemic. He has continually brushed off expert advice about the seriousness of the illness, calling it nothing more than "a little flu." Still, numbers — even official statistics — paint a dramatically different picture: Last weekend, the country saw a 10% spike in deaths, shooting up by 1,131 to a total of 11,123.

In the northwestern metropolis Manaus, in the state of Amazonas, Mayor Arthur Virgilio Neto announced last week that four or five times as many burials were taking place in the city than normal. Like many other cities, Manaus, too, set up makeshift field hospitals to care for the ill. Still, many sick people did not dare come to the overcrowded facilities for help. The number of Brazilians dying at home has jumped by 20% since March. In the state of Amazonas that number is more than two and a half times higher than average.

One reason for that spike in numbers is the fact that so many Brazilians simply live too far away from hospitals to get to them. That is true of indigenous peoples, but not only. Millions of Brazilians live in isolated rural areas. Findings by the Oswaldo Cruz Foundation, a top public health research institute located in Rio, show infections skyrocketing in communities with 20,000 residents or less — lending an even greater sense of urgency to that trend. 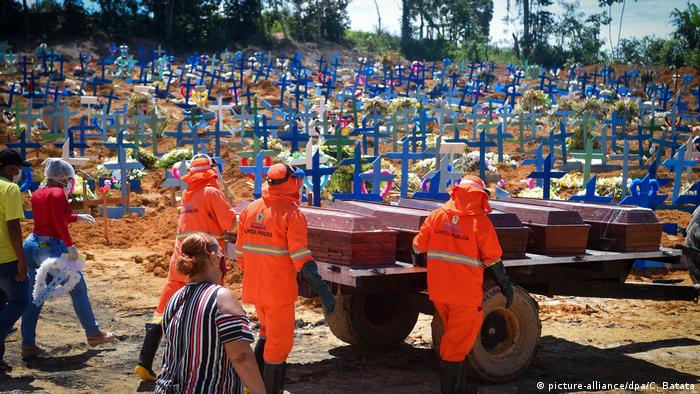 The deceased are being buried in a mass gravesite, such as this one in Manaus

Although Bolsonaro has taken to wearing a face mask in public now and again, he has still never tired of telling people that the damage caused by the economic shutdown will be far greater than that caused by the virus itself. But many parliamentarians and even members of his own government are beginning to see things differently. Mayors and governors in particular have been begging people not to pay attention to President Bolsonaro and adhere to health guidelines and stay home instead.

Scientist Domingos Alves says the back and forth has led to uncertainty among Brazilians: "We have been under lockdown for two months. People are starting to have their doubts. Meanwhile, less than half of all Brazilians are obeying lockdown orders."

One of Bolsonaro's most visible opponents has been Joao Doria, the governor of Sao Paulo state. Although he supported Bolsonaro in the last election, he recently told BBC: "It is amazing when you have two viruses to combat: The coronavirus and [the] Bolsonaro virus. This is not the moment for politics, it is the moment to protect people."

As the leader of Brazil's most populous and economically powerful state, Doria would seem destined to challenge Bolsonaro in the 2022 presidential election, a fact of which Guilherme Casaroes of the respected private university and think tank Fundacao Getulio Vargas, says Doria is certainly cognizant. Casaroes says Doria has taken an entirely different approach to dealing with the virus than has the president: "Doria has introduced strict social-distancing measures, pointing to international practices and scientific advice. He is doing so to distinguish himself from other governors and position himself against Bolsonaro." 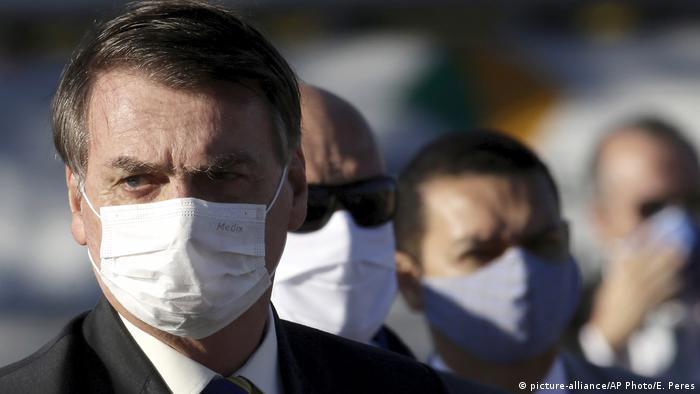 While Bolsonaro has recently started donning a face mask, he continues to play down the risk of the virus

Yet, despite Doria's approach, strict social-distancing rules and curfews have yet to actually be imposed in Sao Paulo. So far, only a few cities, including Fortaleza in the northeastern state of Ceara, or the port city of Recife in Pernambuco on the Atlantic coast, have begun implementing such rules. On Monday, parts of Rio de Janeiro and neighboring Niteroi followed suit.

But since Brazil's lockdown began, local markets have remained almost as full as ever. Some think Bolsonaro may well be right to say more people would die of starvation than of COVID-19 in Brazil if a strict lockdown were to be put in place, as most people there earn their living as day laborers.

But researcher Alves says that is just an excuse, calling it a "bogus dilemma." Speaking of cost effectiveness, he points to an existing program to deliver food and medicine to tuberculosis patients. He says the cost of assisting 10 people for a month in the program is the same as one day of intensive care for one patient. For Alves it is a clear proposition: "Give people money so they can stay at home."

The world's forests act as shields, keeping humans safe from coronaviruses and other diseases. Their destruction can unleash devastating consequences for global public health. (29.04.2020)

The novel coronavirus could indirectly result in many more victims. That's because the fight against "classic" infectious diseases, like measles, TB, HIV and malaria, is in danger of falling behind. (13.05.2020)