Merkel′s party struggles with identity crisis in wake of CDU leader′s departure | Germany | News and in-depth reporting from Berlin and beyond | DW | 12.02.2020 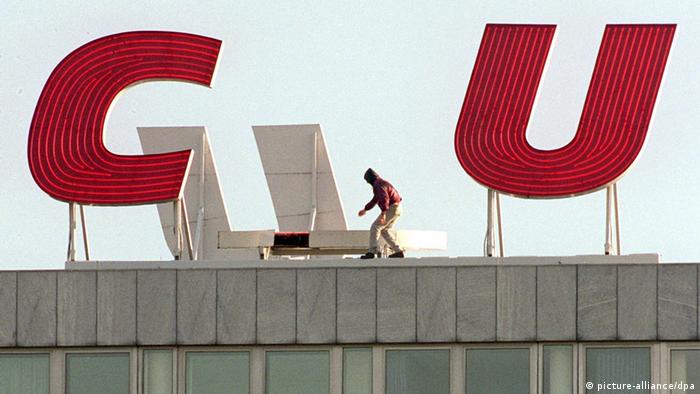 With the forthcoming departure of Annegret Kramp-Karrenbauer as party leader, the Christian Democrats (CDU) are staring into an abyss of uncertainty as Chancellor Angela Merkel approaches the end of her era-defining tenure. What's worse, the ensuing identity crisis could last years, if the experience of the Social Democrats (SPD), Germany's other big-tent centrist party, is anything to go by.

Transitional periods ought to be a good moment for a party's young guns to make hay. That's what the SPD has found out: Kevin Kühnert, the 30-year-old who heads the SPD's youth wing, the Jusos — short for young socialists — has often forced the debate in his party by making provocative declarations, such as suggesting that German automakers could be expropriated.

Kühnert's influence on his party's rank and file is clear. When the previous SPD leadership, Andrea Nahles, resigned in June 2019, it was the candidates Kühnert favored, Saskia Esken and Norbert Walter-Borjans, who surprised many by succeeding her, pushing the party in a slightly less centrist direction — and potentially threatening the coalition with Merkel.

A similar disruption can't be discerned from the CDU's youth organization. Though the members of the Junge Union (Young Union) generally profess even more conservative views than the party's leadership, they have so far been quiet on the issue of what direction the CDU should take post-Merkel. JU leader Tilman Kuban, for example, has not offered an opinion on who he thinks should succeed Kramp-Karrenbauer.

Of the many requests for comment that DW sent out to JU representatives since Kramp-Karrenbauer announced her departure, only two were answered — and only one respondent would speak on the record. That was Philipp Heissner, a member of the JU's leadership committee and currently deep into an election campaign for Hamburg's city-state parliament.

Heissner suggested that support among young conservatives is distributed fairly equally among the possible candidates: the most prominent being Health Minister Jens Spahn and Friedrich Merz, a former CDU parliamentary leader who narrowly lost his bid against Kramp-Karrenbauer in December 2018.

But Heissner maintained a public neutrality on the question of who should be the next CDU leader. "I'd like it to be Jens Spahn or Friedrich Merz," he said. "Of course, Spahn is the younger one, so he might represent a younger generation, which, as we saw in Austria, works well, but Merz is doing better in the polls."

"We had a very thorough process not too long ago looking for a party leader, and everyone said that we had three very good candidates," Heissner said. "Now there are two very well-known ones left, and I think they're both well suited for it."

A representative from the state of North Rhine-Westphalia said the JU did not have a preferred successor. Even under the cover of anonymity, he was reluctant to name any particular potential leader as his favorite. 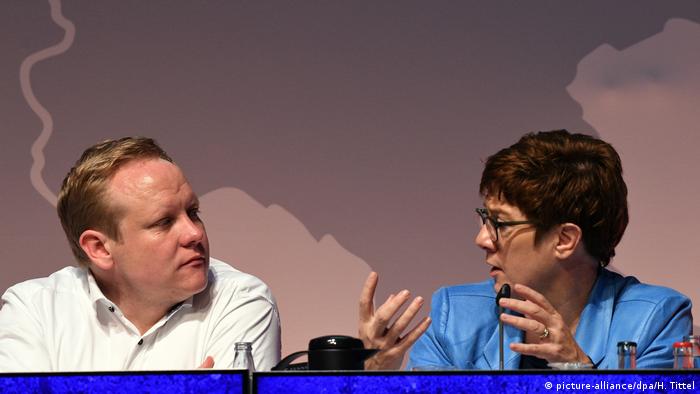 Olaf Boehnke, a German political analyst at the Rasmussen Global think tank, told DW that the fundamental rift in the CDU is at least as serious as the one in the SPD. Merkel's party is torn between members who want to hold the center as the Greens build up significant support in major cities and those trying to head off the nationalist appeal of the Alternative for Germany (AfD), particularly in the CDU's traditional rural heartlands.

"Whoever runs in the end will have to answer two questions: Can I bridge the gap? Or do I have to lead into one of the two directions?" Boehnke said.The CDU's cooperation with the AfD in the eastern state of Thuringia, which helped bring an end to Kramp-Karrenbauer's reign, showed how hard that is — especially in the emerging political landscape. As things stand, the old, traditionally centrist-leaning CDU and SPD will need at least two coalition partners to govern, and in many parts of the country may not even be the biggest parties. In states where the AfD is particularly strong, such as Thuringia, minority governments may become the new norm.

"What happened in Thuringia could easily be replicated at a federal level," Boehnke said. "You don't have the classical options of a big center party with one other party as a smaller coalition partner. I think we will definitely see a three-party coalition, which makes it much more unstable than all of the other coalition governments we have seen in recent years."

For now, the JU, like the broader CDU, remains committed to its line from before Thuringia: that the socialist Left party should remain as much of a taboo as the AfD. The consensus is that, even if the former Left state premier of Thuringia, Bodo Ramelow, was moderate enough, other members of the party are too extremist.

Oddly, the more disruptive voices in the CDU are older, overwhelmingly male figures. Merz, a businessman who favors more deregulation, is 64. And then there's 57-year-old former domestic intelligence chief Hans-Georg Maassen, who has become the leading figure of the Werteunion (Values Union), a noisy CDU faction with some members who would entertain the idea of a coalition with the AfD.

Sharing some rhetoric and talking points with the AfD, the Werteunion played its part in undermining Kramp-Karrenbauer's leadership. But, with just 3,700 members, the Werteunion has less influence in the CDU than its media presence might suggest.

But it does have the advantage of a clear position: Unlike the JU, members of the Werteunion don't hide who they like best of the current likely leadership candidates: Merz. That doesn't necessarily improve his chances, said Boehnke, who is skeptical that Merz has enough friends in the current party hierarchy. "He needs a convincing team," he said. "If you have people like that, you better look around for more convincing friends."

Opinion: Annegret Kramp-Karrenbauer — a battle is won, but the war isn't over

By offering to quit unless the party backed her, CDU leader Annegret Kramp-Karrenbauer has bravely confronted her critics. But AKK's possible path to the chancellery is still a thorny one, says DW's Katharina Kroll. (22.11.2019)

Public approval of Angela Merkel's CDU has taken a nosedive in Thuringia after the party was accused of colluding with the far-right AfD in the state. The Left party, however, has enjoyed a groundswell of support. (11.02.2020)