German lawmakers have voted to boost the eurozone's rescue fund in a crucial test for Chancellor Angela Merkel. Merkel avoided political embarrassment by winning her own side's backing. 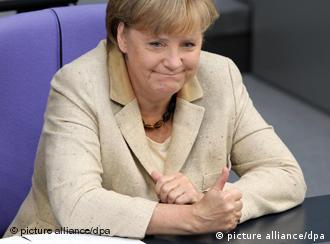 Good news for Merkel as the vote passed smoothly

The vote passed with an overwhelming majority thanks to the support of opposition parties, with 523 votes for, 85 against, and three abstentions.

Ahead of the vote, success or failure for Merkel was to be measured by whether she could muster 311 or more votes from her own center-right coalition, which has 330 Bundestag seats. In the end, 15 coalition lawmakers voted against the legislation or abstained.

There had been concern that the government would be put in a humiliating position if they had been forced to rely on the opposition Social Democrats and Greens to pass the vote. 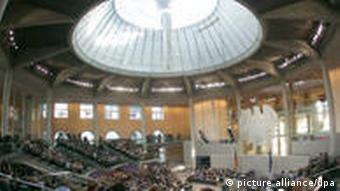 The Bundestag vote was closely watched by the eurozone

As the eurozone's largest economy, Germany is expected to contribute the largest share to the bailout fund. The country has already guaranteed loans to the tune of 123 billion euros; that will now be boosted to 211 billion euros ($283 billion).

In July, eurozone leaders agreed to boost the effective lending capacity of the bailout fund to 440 billion euros. The so-called European Financial Stability Facility, or EFSF, will also have new powers to buy up bonds of shaky economies or lend to governments before they reach full-blown crisis. The fund expansion has to be ratified by all 17 eurozone countries before it can come into force. Ten nations have already approved the plans.

Merkel tried to assure her coalition - and German taxpayers - that their money would not be wasted by backing the euro. But she did not rule out that the money might be used to allow Greece to partially default on its debts. Critics fear the Germans will shoulder the burden of the debt crisis, and that the rescue fund is becoming a bottomless pit.

That impression was reinforced by talks at the International Monetary Fund last weekend of the need to beef up the EFSF even more - on top of the extra powers decided by European leaders in July.

"We have a national interest in stability in Europe and in the stability of the euro," said Volker Kauder, the parliamentary leader of Merkel's bloc, urging a "broad majority" of government parties to vote for the bill.

But Social Democrat Peer Steinbrück told the parliament on Thursday that Merkel had "failed to explain to German citizens why the legislation was necessary." He added that the current measures were "not sufficient."

Investors fear that the German political wrangling may hamper the next stage of the euro rescue, just at the time when the zone needs to present a united front.

The German parliament has voted with a vast majority to enlarge the scope and size of the euro rescue fund. Despite this, uneasiness and worry remain among Germans, writes Deutsche Welle's Bettina Marx. (29.09.2011)

European Financial Stability Facility (EFSF), European Stability Mechanism (ESM) and the fund for Greece: What exactly is behind the different funds being used to secure the financial future of Europe? DW takes a look. (29.09.2011)

Merkel pledges German help for Greece ahead of crucial vote

German Chancellor Angela Merkel threw her support behind Greece as she met with Prime Minister George Papandreou for talks in Berlin. But the real decision lies with German lawmakers, who are set to vote on the matter. (27.09.2011)

Who pays for the European Financial Stability Facility?