Climate change, cybersecurity, and artificial intelligence are some of several areas in which Germany and India have agreed to boost cooperation. The countries' leaders kicked off talks by signing a range of agreements. 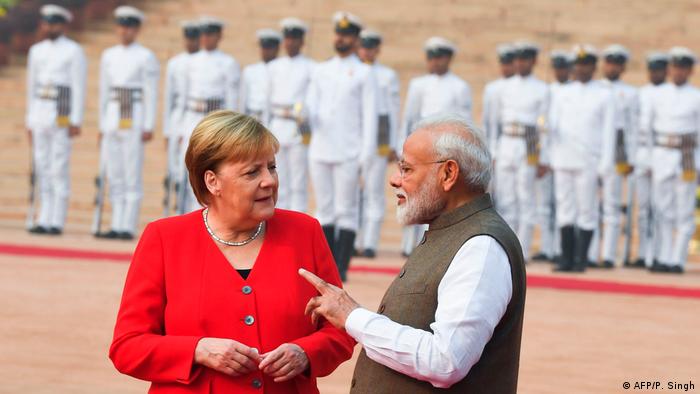 "We're encouraging our private sectors to give an impetus to our growing bilateral trade and Chancellor Merkel and I will meet some of the top business and industry leaders," Modi told a joint news conference.

Merkel is in India for a three-day visit. She was greeted by a guard of honor and will lay a wreath at a memorial ceremony for Mahatma Gandhi.

Due to her ongoing health problems,the chancellor sat as the national anthems were played.

She and Modi attended the presidential palace without pollution masks, despite the megacity's air at the time containing noxious particles 19 times the World Health Organization's safe maximum, according to the US embassy website. 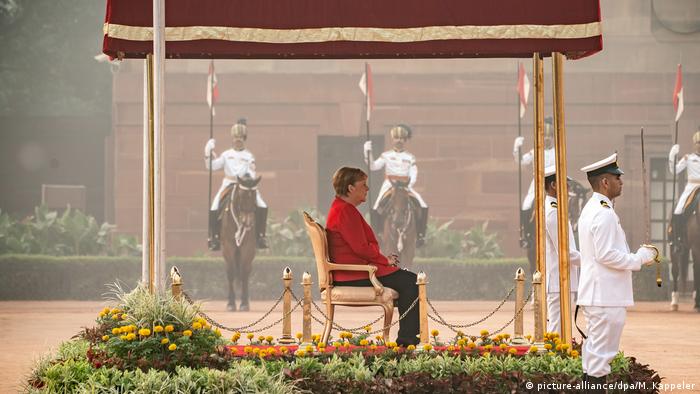 Why is Merkel visiting India?

During her visit to the capital, Merkel will visit a Delhi metro station, which uses coaches manufactured by Berlin-headquartered Bombardier Transportation, as well as a German-Indian automotive components manufacturer on the outskirts of the city.

Merkel and Modi are also set to discuss trade and investment between the two countries as well as foreign policy and security.

"We want to further strengthen our bilateral relations, learn from India, but also place our technological developments in India," said Merkel.

In a video post earlier this week Merkel said she was looking forward to visiting Modi and having talks with him. Standing in front of German, Indian and EU flags she said it would give her the opportunity to speak over a wide range of areas about future issues.

Michaela Kuefner, DW's chief political editor who is traveling with Merkel, said the discussion with India will be conducted "always with a view on China" — India has complex economic and political relations with its neighbor and most populous nation in the world.

There will be an appetite for exchange, with Germany wanting to ensure it is one of the first partners when India decides to open its economy up further, and India looking to learn from Germany's education and training sectors, added Kuefner.

Germany is India's most important trading partner within the European Union. Bilateral trade totaled $21.9 billion (€19.6 billion) in the 2017-18 financial year, an increase of 17% from the previous year.