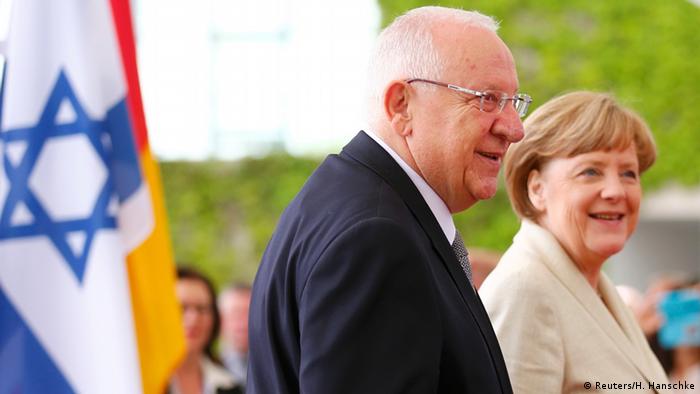 Germany's Angela Merkel welcomed Israel's President Reuven Rivlin at the Chancellery on Tuesday to mark 50 years of ties between their two countries.

"We believe that Germany needs to provide special support to Israel," the chancellor said, while suggesting an independent Palestinian state as a solution to the conflict in Gaza. "We want everyone there to live in peace," Merkel told the audience.

Speaking to a group of students earlier, Merkel supported Germany's weapons export to Israel, arguing that Nazi Germany had killed 6 million Jews and that it had a responsibility towards Israel.

"The Jews were very happy to get a country of their own, and a refuge, after the Second World War. That is why we are doing this," she said.

A special ceremony had been planned at the Berlin Philharmonic later in the day to mark the anniversary. The two countries formally established relations in 1965, two decades after the end of World War II, when Nazi Germany surrendered to the allied powers.

Rivlin reached Berlin on Monday for his three-day visit to Germany. The president met his German counterpart Joachim Gauck last evening and German Foreign Minister Frank-Walter Steinmeier on Monday. He was also scheduled to meet the Christian Democrat leader Norbert Lammert after discussions with Merkel.

Meanwhile, the German Defense Minister Ursula von der Leyen, said during a visit to Jerusalem on Tuesday that developing Israel's capacity to defend itself was a priority for Berlin. In a meeting with Israeli Prime Minister Benjamin Netanyahu, she said Germany had its most intensive security-related discussions with Israel, including over 70 projects related to training soldiers and gaining experience in war.

Germany had, "in words and deeds" proved its duty towards Israel's security, the defense minister told reporters, adding that "with this strong basis of trust and friendship that we have achieved, we can discuss difficult subjects with one another."

The two sides also discussed the nuclear deal between the West and Iran, which Israel has rejected until now. "This agreement must aim to create transparency and control," she added.

The Israeli president has been received with military honors by his German counterpart Joachim Gauck in Berlin. His visit marks 50 years of diplomatic relations with post-war Germany. (11.05.2015)