The Israeli president has been received with military honors by his German counterpart Joachim Gauck in Berlin. His visit marks 50 years of diplomatic relations with post-war Germany. 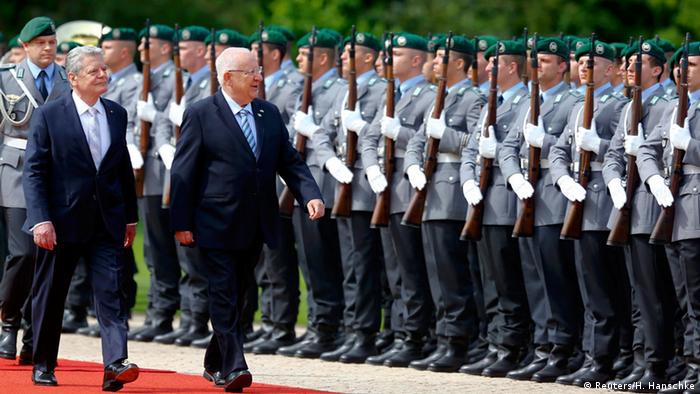 At the start of his three-day visit, Israeli President Reuven Rivlin received an official welcome in Bellevue Palace, the German president's official residence.

Gauck and Rivlin, who crossed the red carpet to Bellevue in a close embrace, are marking 50 years of diplomatic relations between West Germany - and then Germany - and Israel.

Gauck stressed that the relationship between the two countries would always be special and that: "We Germans are aware of our moral responsibility with regard to the Jewish people and the state of Israel, and we will not allow this awareness to fade."

Rivlin recalled that he was one of the students who protested the arrival of the first German ambassador in Israel in the 1960s, as "a friendship between Germany and Israel didn't always seem natural." But today, he stressed, "I travel to Germany to mark 50 years of a very close friendship." 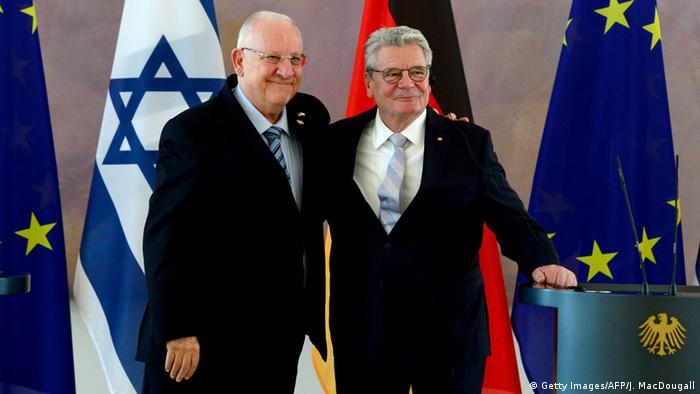 Gauck and Rivlin stressed the friendship between Israel and Germany

Despite the generally amicable atmosphere, Gauck reiterated Germany's desire for a two-state solution, which Rivlin, as well as Benjamin Netanyahu's government oppose.

"We continue to feel responsible to bring about a two-state solution," he said, while Rivlin once again rejected the approach, while acknowledging that "Jews and Arabs are destined to live together."

Rivlin then went to the station in Berlin's Grunewald district to lay a wreath at the Platform 17 memorial, commemorating the thousands of Jews who were deported to concentration camps from the station's platform 17 during World War II.

He warned that "no nation is immune to anti-Semitism and xenophobia" nor "extremism and fundamentalism," stressing that international cooperation as key to fighting "attacks on human dignity."

Dancing in a Berlin bar can change everything. DW's Caroline Schmitt explores her own German Holocaust guilt by dancing and chatting with young Israelis. "I don't need you to cry over my grandparents," she's told. (11.05.2015)

In a last-minute coalition deal, Israel's far-right has given Prime Minister Netanyahu the majority needed to stay in power. The left has called the move a "failure." DW's Daniella Cheslow reports from Tel Aviv. (07.05.2015)