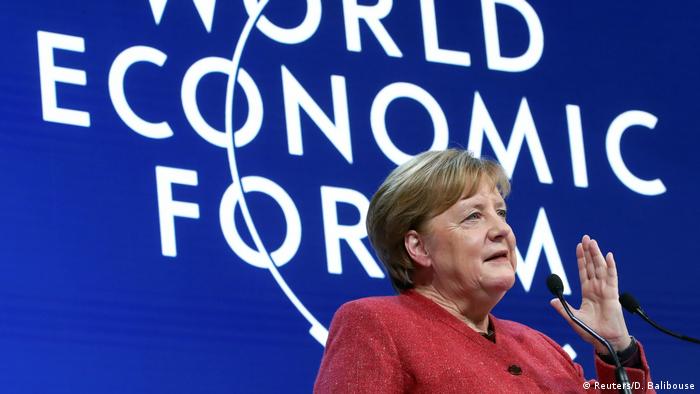 In a wide-ranging speech at the World Economic Forum (WEF) in Davos, Switzerland, German Chancellor Angela Merkel admitted that Germany had made a mistake during the 2015 refugee crisis. Not, she said, by welcoming asylum-seekers fleeing conflict, but by not preparing for their arrival as civil conflicts began cropping up across the Middle East and northern Africa.

"The mistake was not to have paid attention to create an environment where people can stay in their own country," the chancellor said.

She warned that the mistake should not be repeated with Libya, where the conflict between the UN-backed government and rival commander Khalifa Haftar is destabilizing other nearby countries like Mali and Niger.

"We have to do everything to ensure a peace process" in Libya, Merkel said, to prevent another major humanitarian crisis and refugee influx. Berlin recently hosted talks between the warring sidesin Libya, which ended in an agreement to limit foreign interference and commit to a UN arms embargo.

Part of the reason behind the instability in Libya, the chancellor continued, was that a changing of global mores led to widespread uncertainty and a lack of security.

Lack of diplomacy worse 'than during the Cold War'

To that end, Merkel suggested that leaders from different parts of the world need to leave their digital echo chambers and resume diplomacy and bilateral communication.

We live in a world "where lack of speech is more pronounced than during the Cold War," she said. The chancellor added that she was gravely concerned by the number of conversations she has had with leaders who "rarely speak to each other" as countries become inward-looking despite ever-growing globalization.

Merkel's speech also touched on climate change, saying that industrialized nations have a "technological obligation" to address environmental concerns in terms of both industry and policy.

Acknowledging Germany's role as a hub of the auto industry, Merkel said it was her country's particular duty to create more carbon-neutral transportation. As a wealthy nation, it was also Germany's role to support sustainable development in other parts of the world, she added.

But when it comes to development, Merkel said Europe should be proud that it is working on projects "with Africa and not for Africa," and that African nations need to be allowed self-determination. Perhaps with an eye to China's Belt and Road Initiative,she said Africa's development should be driven from what those nations want and need — and not what other powers want.