German Chancellor Angela Merkel has said the European Union's policy toward Eastern Europe is not intended to curtail Russian influence in the region. The EU is expected to reaffirm ties to six former Soviet republics. 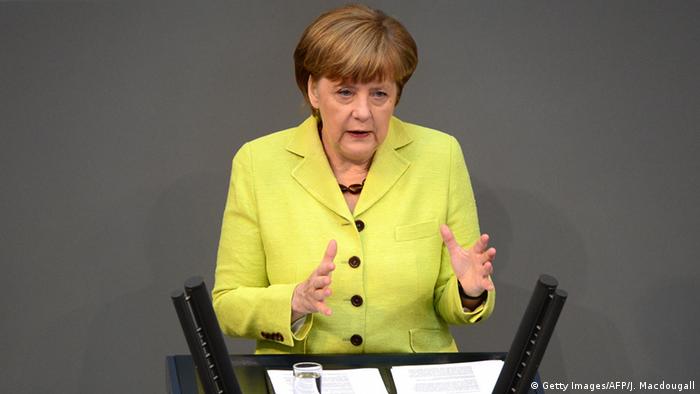 German Chancellor Angela Merkel told German lawmakers Thursday that the EU's so-called Eastern Partnership "is not directed against anyone, and not against Russia." She pointed out that the European Union's neighbors to the east are not presented with an "either-or" choice between Russia or the West.

The last Eastern Partnership summit, held in 2013 in Vilnius, Lithuania, was a catalyst for the current crisis between Ukraine and Russia. Former Ukrainian President Viktor Yanukovych's refusal to sign a free trade deal with the EU, which Moscow regarded as an attempt to pull its largest ex-Soviet ally toward the West, sparked the so-called Euromaidan revolution that ousted Yanukovych and brought Russian relations with Ukraine - and Europe - to a post-Cold War low.

Speaking to the Russian Duma recently, Foreign Minister Sergei Lavrov made it clear once again that "we don't see our neighbors' aspirations to strengthen ties with the European Union as a tragedy, but to make those processes develop positively they mustn't hurt the interests of the Russian Federation."

Talks at a two-day EU summit in Riga among the EU and Ukraine, Moldova, Azerbaijan, Belarus, Georgia and Armenia serve to reaffirm ties between the bloc and the six former Soviet republics despite pressure from Russia. 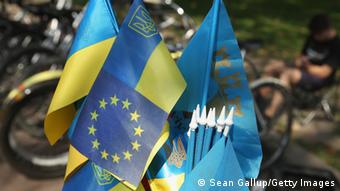 In her speech in the German parliament Thursday, Merkel emphasized that "since Vilnius, marked progress has been achieved, for example with the association agreements with Ukraine, Moldova and Georgia."

But she also made it clear that the "Eastern Partnership is not part of the EU's enlargement policy" and that "we should not foster false hope."

Ahead of the Riga summit, Kyiv's pro-Western government has demanded reassurances from Brussels that it is a suitable candidate for EU membership.

The EU has already agreed a free-trade pact with Ukraine as well as Georgia and Moldova.

"Now we want concrete assurances in Riga that Ukraine is eligible for future membership of the European Union, and has the chance to become an accession candidate in the future," Foreign Minister Pavlo Klimkin told German daily "Die Welt."

"We want to see light at the end of the tunnel," he said, adding that Kyiv also expected a commitment at the summit to visa-free travel to the EU from next year for its citizens.

Among the six countries in the eastern partnership, there are "vastly different expectations from the various countries," Merkel said, adding that Germany, for example, "respects Armenia's point-of-view" and that "it was up to Belarus to put in place the necessary conditions" for closer cooperation with the EU.

Pro-Russian Armenia and Belarus have decided to join the Moscow-led Eurasian Economic Union and have refused to sign up to any statement that calls Russia's annexation of Ukraine's Crimean Peninsula illegal. But EU diplomats have hinted that a compromise text would be put to them.

Merkel: No place for Russia at G8, for now

Speaking as the host of the upcoming G7 meeting of industrialized nations, Merkel on Thursday reiterated that it was "unimaginable" that Russia would be readmitted to the forum.

"As long as Russia does not commit itself, and act according to, the fundamental values of international law, a return to the G8 format is unimaginable for us," she stressed.

Russia's annexation of Crimea a year ago caught Berlin completely by surprise. Today, Germany has taken on a greater international role, and the country's relations with Russia have changed. (18.03.2015)