German Chancellor Angela Merkel told lawmakers forcing carmakers to retrofit diesel cars to lower emissions was the wrong approach. She said it was up to the industry to regain public trust and invest in the future. 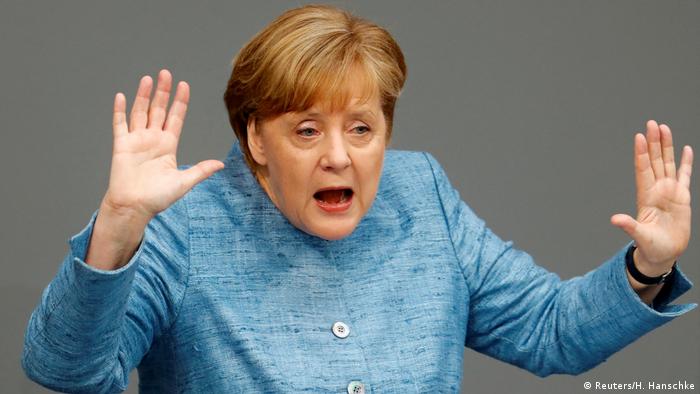 Speaking at Germany's parliament, the Bundestag, during day two of this week's budget debate, Chancellor Angela Merkel addressed the issue of diesel emissions and Germany's massive automobile industry. She told parliamentarians it was not in the country's best interest to use political arm-twisting to force manufacturers to retrofit diesel vehicles to make them cleaner, something her coalition partners in the Social Democratic Party (SPD) have consistently called for.

Merkel said: "It is for us to tell the sector that it must repair the trust that it has lost. But it cannot be in our interest to weaken the automobile sector to such an extent that it no longer has the strength to invest in its own future." That future, she said, was in new mobility technologies, such as driverless cars and alternative power sources.

The Green party's parliamentary group leader Katrin Göring-Eckhardt, speaking for the opposition, criticized Merkel's stance, saying: "That was the same record I've heard a hundred times, and it was same record I always hear from the auto lobby. Of course, it's about our automobile industry doing what it was supposed to do, but didn't, namely investing in the future. But people cheated by those same companies must finally be compensated and given replacement hardware."

Merkel has voiced skepticism about such moves in the past. But critics have demanded car manufacturers foot the bill for software and hardware updates to their diesel cars to reduce their nitrogen oxides (NOx) emissions. The debate has been simmering since the "Dieselgate" scandal broke in September 2015, when it became known that German automakers had regularly used software tricks to cheat on emissions tests — especially in the US, where NOx controls are stricter than in Europe. Not waiting for federal or industry action

In response to Merkel's statement, environmental organization Greenpeace demanded the government finally announce when the last internal combustion cars would be produced in Germany. Greenpeace said that only when the industry had a clear perspective would it, "be able to invest in clean mobility in the future rather than continuing to sink billions in important research euros into environmentally damaging internal combustion engines."

On Wednesday, the city of Hamburg also announced it would instate a partial ban on diesel cars in the city, becoming the first major German city to take such action. Municipalities have come under increasing pressure from environmental and citizen's groups to lower pollution levels to ensure residents' basic human right to clean air. German air quality has improved immensely in recent decades but still falls short of official targets on some days.

Environmental groups say the partial ban does not do enough to substantially address the problem, pointing out that detours will simply mean drivers will travel longer distances on alternative routes. Should other cities follow suit it could have grave consequences for the domestic auto industry. German carmakers produce nearly 20 percent of all automobiles worldwide and employ more than 800,000 workers.