At VW's annual general meeting all eyes were on Herbert Diess and his restructuring plans. Though shareholders are focused on the future, the ongoing diesel crisis got more airtime than expected, reports Timothy Rooks. 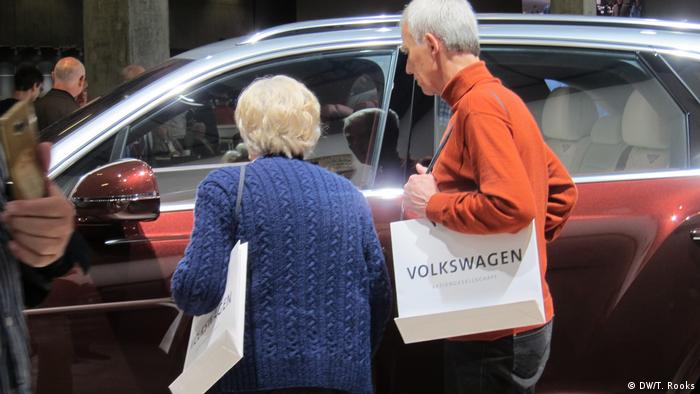 In the early morning thousands of Volkswagen Group shareholders slowly made their way to the CityCube convention center in Berlin. After navigating a police cordon everyone was greeted by airport-like security with a line of metal detectors and x-ray machines. And just like at the airport no water bottles were allowed inside.

After overcoming these hurdles investors were ushered into a wonderland of VW marketing, shiny cars, trucks and food. Generally casually dressed and mostly over 50, it was a pretty homogenous group. One of the younger attendees, 20-year-old Leonart Ruhm, came all the way from VW's hometown of Wolfsburg to hear what the company is planning. Interested in the future of e-cars, he nonetheless admitted that the diesel scandal "still hung over the company." But even this and the few protestors standing outside couldn't dampen the show. 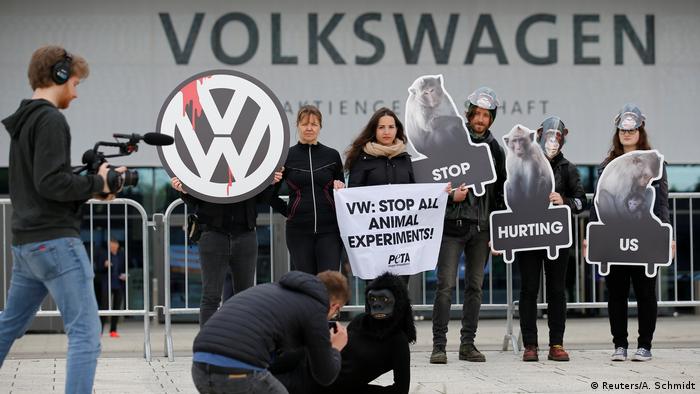 Activists from animal rights group PETA demonstrated outside VW's shareholders' gathering. Their protest focused on experiments with monkeys inhaling diesel fumes from VW cars, and intended to prove that their exhaust emissions are not carcinogenic — one of the latest scandals involving carmakers, including VW.

VW is the biggest carmaker in the world and employs over 640,000 people. Last year the combined group which includes VW, Audi, Skoda, Bentley and Porsche sold 10.7 million vehicles and made an operating profit of €13.8 billion ($17 billion), nearly doubling the previous year's profit.

The man of the hour

When Hans Dieter Pötsch, chairman of the supervisory board, took the stage and opened the 58th annual meeting the auditorium was only half full. After Pötsch praised former CEO Matthias Müller for his hard work and acknowledged the ongoing diesel investigations as the "biggest crisis in the company's history" the new man of the hour, Herbert Diess, finally took the microphone.

Probably no one was more surprised to be standing here today than Diess himself. He is fairly new to the VW family and was only elevated to the CEO position three weeks ago. Dressed in a dark suit and a polka dot tie, he barely had time to memorize all the facts and figures, yet he said all the right things and opened up about "uncomfortable" truths.

A big part of his mea culpa was dedicated to the diesel crisis as he himself kept calling it. Confirming what everyone already suspects, he recognized that civil, criminal and regulatory problems will continue to dog the company for the foreseeable future.

Throughout his 40-minute talk shareholders were restrained. The only really audible round of applause came when he spoke of the need to be "humble." Investors are undoubtedly hoping these are not just empty words, but a sign of a new culture that will lead to change.

Overall Diess' vision for the future is a sleeker company focused on teamwork with a concentration on China. By 2025 he wants to be building 3 million electric cars a year. In an effort to reach this goal he promised investments of around €34 billion through 2022. This year 10 new electric or hybrid vehicles will be added to the 8 already in production. Overall the group will introduce 70 new vehicles this year.

Ulrich Hocker from the German Association for Private Investors (DSW) thinks it was a smart decision to bring in Diess since he is untainted by the diesel scandal. At the same time, he is disappointed with how the company is handling the internal investigation into the crisis, accusing the company of acting "too slow with too few personnel consequences." His organization has called for an independent investigation and is fighting the company in court to get one. 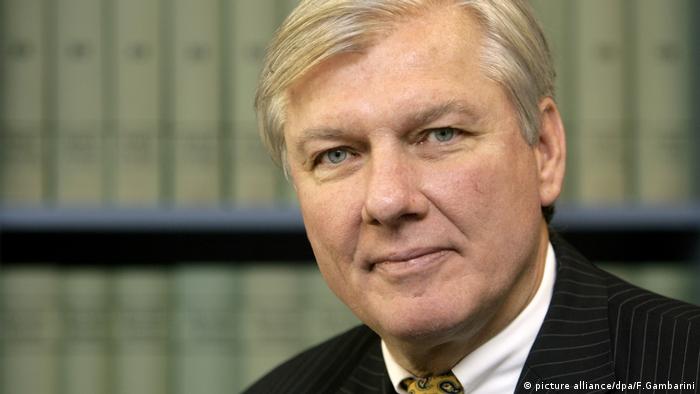 Ulrich Hocker, the head of the German shareholders association DWS, doesn't think investors are too worried about a lack of personal consequences at VW over Dieselgate. But despite the carmaker's shares doing well, he warned that "a Damocles sword is hanging over the company."

In contrast, Manfred Klein, a long-time shareholder, insists that the ongoing diesel situation is a "burden" on shareholders since it impacts dividends — even though they are at near pre-crisis levels. But he also thinks Diess has a good chance of gaining the trust of the unions, which is necessary to push through change.

But when it comes to real power most of the investors present have little say. Because of VW's complex history only a small clique of shareholders really matter: the state of Lower Saxony, home to VW; Qatar Holding; and the holding company owned by the Porsche and Piëch families, descendants of the company founder.

Together these three groups own around 55 percent of the stock but control nearly 90 percent of the voting rights. So why the big show for a group of investors who hardly have any voice? Why the endless buffets, feel-good displays and glossy booklets?

Hocker says it is not out of the goodness of VW's heart. Legally they have to hold an annual meeting since they are a listed company; "but shareholders are also potential customers and it is a giant marketing event." After all selling cars is what really counts.

How much the biggest crisis of its history will eventually cost Volkswagen is still unknown. When the scandal broke in 2015, it brought down the powerful then-CEO Martin Winterkorn. His replacement, Michael Müller, lasted less than three years. Among the investors in Berlin it was impossible to ignore the message that Herbert Diess should use his time efficiently and prove that he deserves the shareholders' trust.