The newly appointed chief executive officer of German carmaker Volkswagen has said the company can only be successful in the long term if it stays on the path of a more transparent and open corporate culture. 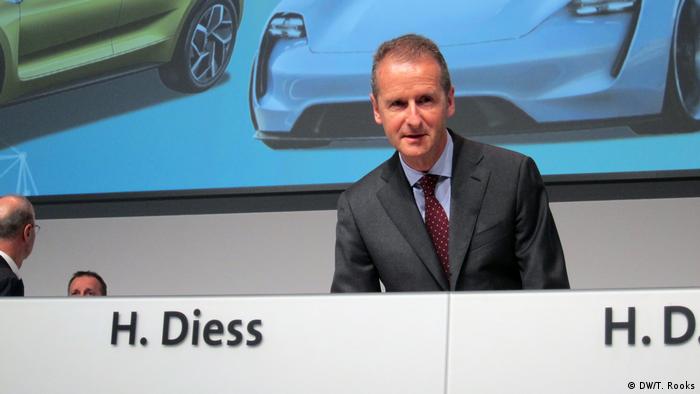 Diess was appointed recently to replace Matthias Müller, who took the helm shortly after the company admitted it had installed software in diesel vehicles that manipulated emissions tests results.

At the shareholder meeting, Diess said he was committed to pushing through restructuring plans to reorganize the firm's divisions in pursuit of synergy effects and better manageability as well as in a bid to keep reforming the carmaker's corporate culture.

The new CEO's address to shareholders came shortly after the company reported solid figures for the beginning of the year, following a record-breaking 2017 in terms of sales and revenues despite the aftermath of its large-scale emissions-cheating scandal.

In January, Volkswagen again posted record sales and achieved revenues of €20.1 billion ($24.3 billion) in the first quarter of 2018.

But Diess warned that long-term success could only be ensured if the firm's corporate culture became more "open, honest and decent," adding that any misconduct had to be punished relentlessly.

Many small changes, 'no revolution'

The CEO told shareholders that the 12-brand Volkswagen Group was aiming to introduce over 70 new models in the course of the current year.

Addressing the issue of efficiency and profitability, Diess said new strategies had to be worked out for some non-core businesses including Ducati, Renk and MAN Diesel & Turbo.

He indicated that one of the options would be to spin them off completely, failing to say whether any concrete plans for such a move had already been debated among executives.

Diess confirmed the company's commitment to e-mobility, reiterating the firm's resolve to become a global leader in electric car production and technology.

Under its new e-mobility strategy, the German carmaker announced it had awarded €40 billion in contracts to battery producers — double the sum earmarked just a few weeks ago and almost as much as the entire market value of its US rival Tesla. The deals take the German manufacturer within striking distance of its target to secure €50 billion euros in supplies.

By 2025, VW plans to sell as many as 3 million all-electric cars per year, Diess told investors, leading a push by global auto giants into Tesla's niche. VW makes more cars in four days than Tesla does in a year, and is harnessing its immense financial and engineering firepower to make up for ground lost in the emissions-cheating scandal.

"By 2020 we will offer our customers more than 25 new electric models and more than 20 plug-in hybrids," Diess said. "In just a few years' time, then, across all brands and regions, we aim to put the world’s largest fleet of electric vehicles on the road."

VW's Audi brand, the group's largest earnings contributor, is expected to start production of its first all-electric SUV at the end of August, followed by the four-door coupe Mission E from sister brand Porsche next year. VW's namesake brand will start to roll out the new I.D. range of battery-powered vehicles from 2020, which will be priced at comparable levels to similar combustion engine vehicles.

Herbert Diess will replace Matthias Müller as VW CEO. He has a reputation for driving through difficult changes. From his days reining in costs at BMW, the Austrian has often irritated unions — and delighted bosses. (11.04.2018)

The panel tasked with investigating the scandal uncovered rampant cronyism and incomptence from the EU level down. The problem is much bigger than Volkswagen, the committee found. (01.03.2017)