The German carmaker has initiated the deepest changes to its management since the diesel emissions scandal of late 2015, replacing its CEO and establishing a corporate structure designed to speed up decision making. 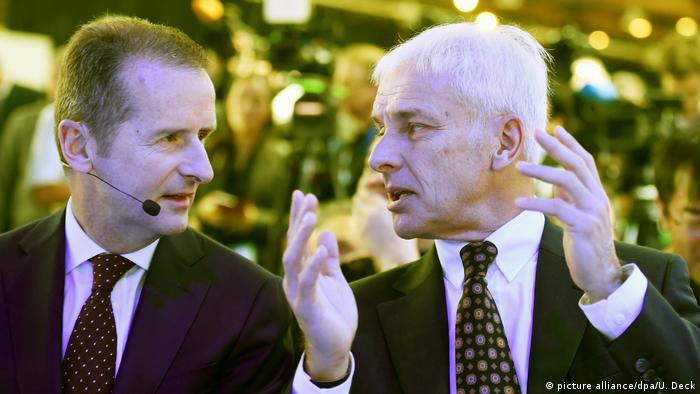 German car giant Volkswagen on Thursday said it had named VW brand chief Herbert Diess (at left in the picture above) the company's new chief executive officer. Effective immediately, he's replacing Matthias Müller, who had served as CEO since 2015 and was tasked with maneuvering the carmaker through its large-scale emissions-cheating scandal. Müller is expected to stay with the company until 2020 when his contract expires.

Müller managed to steer the Wolfsburg-based firm into a massive restructuring, aiming to offer electric versions of many of its models and slim down its operations over the coming decade.

Chairman Hans Dieter Pötsch thanked Müller, saying he was leaving the company in robust shape following the worst crisis in its eight-decade history. "Not only did he safely navigate Volkswagen through that time... he also fundamentally realigned the group’s strategy [and] initiated cultural change," Pötsch said in a statement.

On Müller's watch, the 12-brand VW Group last year held on to its title as the world's largest carmaker and made a record net profit of €11.4 billion ($14 billion).

But Müller also ended up in prosecutors' sights over suspicions he may have known about the diesel cheating before it became public and may have failed in his duty to inform investors.

Moving on to greener pastures

"The most important part of getting the crisis under control is over now, so it's right for VW to look in a new direction," said Metzler bank analyst Jürgen Pieper.

He said the new man at the helm of the carmaker, Herbert Diess, was known as "a very good cost manager" and would be the best solution as a successor for the next five years.

German media reports said such a move had to be interpreted as a goodwill gesture towards union leaders, with whom Diess had had a tense relationship in the past few years.

The VW board also decided to restructure the group's 12 brand divisions. They will be bundled into three groups labelled Volume, Premium and Super-premium, while its trucks and buses unit is to be separated as part of a "planned preparation for capital market readiness."

Volume is scheduled to include VW, Skoda and other mass-market brands. Premium will be made up of Audi, while the new Super Premium division comprises Porsche, Bentley, Bugatti and Lamborghini.

Diess will retain his role as head of the VW brand. Under the new structure, he will lead the volume segment, which will take on group-wide responsibilities for research and development. Rupert Stadler, the head of Audi and the new premium division, will also lead group-wide sales. Oliver Blume, head of Porsche and the super-premium division, will take on group production and is also appointed to the management board.

According to supervisory board chief Hans Dieter Pötsch, the management reshuffle and the restructuring effort are to facilitate synergy effects in the company and accelerate in-house reforms.

"It's our objective to make our company future-proof," Pötsch said Thursday, adding that Volkswagen was resolved to play a big part in shaping tomorrow's mobility.

But VW's traditionally powerful labor representatives don't seem to be convinced by the sudden changes initiated by the VW board.

"Nobody knew anything," a labor union representative at one of VW’s brands told the news agency Reuters. "What’s going on there is plain folly," said the person, who didn't want to give his name. "The way in which changes of such a magnitude were communicated internally is more than questionable."

Volkswagen’s efforts to reform have often been stifled by powerful labor unions who command half of the seats on the board of directors, and the German state of Lower Saxony, which controls a 20 percent voting stake.