Merkel and Sarkozy propose tighter coordination in euro group | Europe | News and current affairs from around the continent | DW | 04.02.2011

Chancellor Angela Merkel has set out her joint proposals with French President Nicolas Sarkozy for a 'competitiveness pact.' The target is to allow for linear, shared growth in the 17-member euro zone. 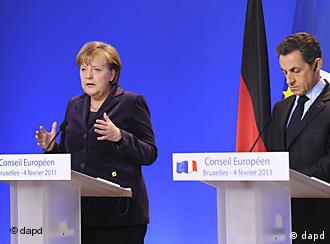 Merkel and Sarkozy made a joint declaration at the summit

European Union leaders discussed how to strengthen the eurozone's 440 billion euro bailout fund at a summit in Brussels on Friday, to work out how best to insulate the region from the debt crisis.

"We want to bring in a competitiveness pact and step by step bring about a more linear, shared growth," German Chancellor Angela Merkel said in a joint declaration alongside French President Nicolas Sarkozy at the summit.

Germany and France will set out proposals for tighter economic and fiscal coordination, measures they hope will be included in a "comprehensive package" which leaders are due to discuss in March, along with changes to the European Financial Stability Facility, the eurozone safety net brought in last May.

"We will talk about how to prepare decisions that are still necessary, in particular with regard to the permanent crisis mechanism which is to be agreed by March," German Chancellor Angela Merkel told reporters as she arrived for the meeting. 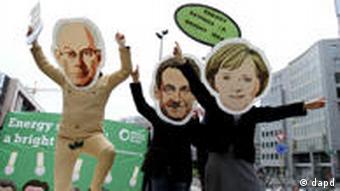 Protesters outside the summit wore masks of EU leaders

In a draft statement prepared ahead of the summit, the 27 heads of state said they would consider "concrete proposals" for strengthening the EFSF "to ensure the necessary flexibility and financial capacity to provide adequate support," with those discussions set to be finalized next month.

With no major decisions expected at Friday's meeting, diplomats are describing it as a stock-taking exercise to assess progress since the last meeting in December, since when concerns about the debt crisis spreading from Greece and Ireland to Portugal, Spain or beyond appear to have diminished.

After a year of trying to extinguish sovereign debt concerns, officials have been heartened by relative calm in financial markets in recent weeks, but also worry that failure to agree on concrete measures before the next scheduled summit on March 24-25 could reignite the conflagration.

Strengthening the EFSF has been the focus of discussion for months, since it became clear its effective lending capacity was only about 250 billion euros, not 440 billion, due to guarantees built into the fund to maintain its triple-A credit rating.

European Central Bank President Jean-Claude Trichet, who held talks with EU leaders over lunch, is among those calling for the EFSF to be enlarged and made more flexible, so that it is not just a bailout lender of last resort.

There is also likely to be discussion on Friday on the bailouts that have already been provided to Greece and Ireland, and on whether the interest rate being charged on their loans should be lowered, or the term of the loans lengthened.

The EFSF is the chief weapon in the EU's arsenal, but deep disagreement remains over how it should be strengthened, with Germany determined to secure stricter budgetary commitments from other euro zone member states in exchange for agreeing amendments to the fund.

In their proposals for economic coordination, France and Germany will lay out plans for stricter fiscal discipline, including the idea of a "debt brake" that would establish a constitutional limit on deficits, and calls for more regular euro zone summits to better coordinate economic management. 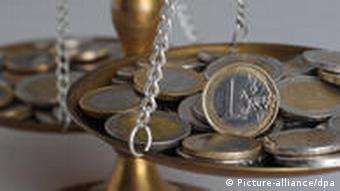 "We want to increase our competitiveness and grow closer together within the Eurogroup and also invite other countries to take part," Merkel said.

Germany's ideas also include raising the pensionable age depending on a country's demographics, limiting wage increases, and agreeing a common tax base for corporations.

However, diplomats said that Merkel and French President Nicolas Sarkozy had been unable to agree on the details of a proposal, and would therefore only present the broad outlines of their thinking at the Friday summit.

"Nobody knows what is in this proposal concretely. It's some kind of political yeti: everybody was talking about it, but nobody has seen it, so we will wait for concrete proposals and then we will analyse it and reach a decision," Czech premier Petr Necas said.

"I ... expect progress on the comprehensive economic plan we have prepared for the euro area and for the EU as a whole," European Commission President Jose Manuel Barroso said on entering the summit. "The ideas presented by some member states fit very well with this overall approach of reinforcing our governance."

Swimming against the tide

There remains the risk that Friday's summit will underline just how far apart states remain, with Germany largely backed by the likes of France, Finland and the Netherlands, while Greece, Italy, Spain and others pull in different directions.

As if to illustrate this, Belgium's Prime Minister Yves Leterme said Friday he was "absolutely not in agreement" with Franco-German plans to harmonize euro-zone governance.

"There must be more economic cooperation, but member states must be left the room to carry out their own policies," Leterme said on arriving the summit. "Each member state has its own accents, its own traditions. We will not allow our social model to be undone," he added.

Friday's summit was originally intended to discuss energy issues. While these remain on the agenda, the debt crisis and the situation in Egypt are likely to dominate the discussion.

Berlin and Brussels likely to lock horns at EU summit

Germany is in a war of words with the European Commission about the future shape of the stability mechanism protecting the eurozone. The Commission wants the fund to expand, but Germany is asking who will pay. (04.02.2011)

It could be a hard sell: German and French leaders hope to convince their counterparts at the European Union summit in Brussels of the need for a deeper harmonization of economic policies. (03.02.2011)