March on Washington 2020: History in the making

On the anniversary of Martin Luther King's "I have a dream" speech, Washington saw another racial justice protest. People from across the US heard a clear message: If you want change, vote! DW's Carla Bleiker was there.

In 1963, tens of thousands of Americans gathered in front of the Lincoln Memorial in Washington DC on a hot August day to demand social justice and racial equality. They listened to political and spiritual leaders including Dr. Martin Luther King, Jr., who shared his vision for the future of his country.

"I have a dream that one day this nation will rise up and live out the true meaning of its creed: 'We hold these truths to be self-evident, that all men are created equal,'" King said in his most famous speech. "I have a dream that my four little children will one day live in a nation where they will not be judged by the color of their skin but by the content of their character."

Exactly 57 years later, on August 28, 2020, crowds descended on the Lincoln Memorial for another March on Washington, because King's dream is still not fulfilled. They came in T-shirts with the words "I can't breathe" on them, in memory of of George Floyd, the unarmed Black man who was choked to death by police in Minneapolis. And they came with signs bearing the name of Jacob Blake, the unarmed Black man who was shot in the back seven times in the small town of Kenosha, Wisconsin, on Sunday, leaving him paralyzed from the waist down.

'White offenders are treated with humanity, Black people are not'

Vance Jay came to Washington from his home state of Wisconsin to "show solidarity," he told DW. "This is a chance for our kids to see how Black people come together and how we gather to affect real change."

Jay and his friends wore shirts emblazoned with "Black Lives Matter" on the front and "We're WI men" on the back. What upset him most about what happened in Kenosha, Jay said, is that the young white man who is charged with shooting and killing two people during protests Tuesday night "was able to just walk to the police and wasn't even stopped." 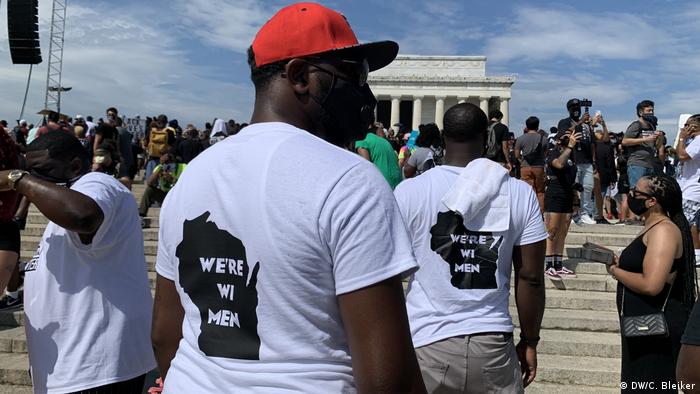 That is something many participants are angry about.

"That moment [in Kenosha] fit in the trend how certain offenders are treated because of their skin color," Zakiya Glynn from New York said from her spot on the lawn close to where the steps to the Lincoln Memorial begin. "It shows the difference between offenders who are white, who are treated with humanity, and Black people, who are not."

Not everyone who wanted to come to the march on Friday could make it. The National Action Network (NAN), the civil rights NGO that organized the event, canceled several busses from coronavirus hotspots that were supposed to drive protesters to Washington.

"Safety is our main priority," Tylik McMillan, NAN's Director of College and Youth and one of the head organizers, told DW earlier this week. Every person attending the march would have their temperature checked before being let into the area around the Lincoln Memorial and the Reflecting Pool, and social distancing rules would be enforced. 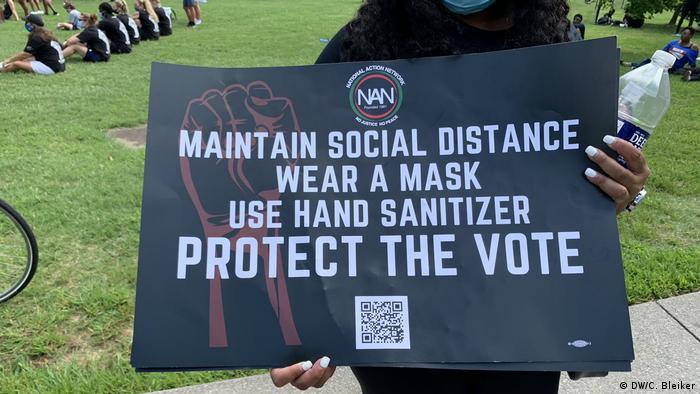 The reality on Friday afternoon looked a bit different. The area from where protesters watched the speeches on large video screens at the bottom of the steps to the Lincoln Memorial was so crowded, it was sometimes hard to even take a few steps.

But almost everyone wore masks.

And there was still room for little outbursts of joy. When upbeat jazz music started playing after one speaker left the stage, a young woman spontaneously started dancing down the path next to the Reflecting Pool, and a young man walking past cheered her on.

Down the road from the Lincoln Memorial, a fire truck set up an impromptu fountain. You could hear the squeals of joy from children and adults alike before you saw them running through the cold mist, with water splashing up from the sidewalk — a welcome reprieve from the punishing DC heat. 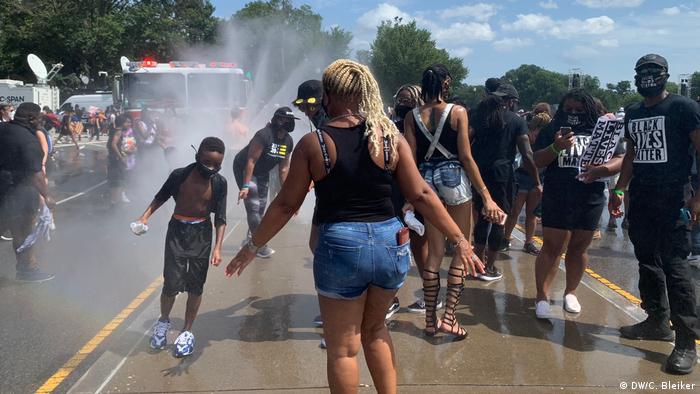 The muggy weather didn't put a damper on the enthusiasm of speakers or audience at the march when it came to the event's main message: Go out to vote in this fall's presidential election. No matter who you talked to in the crowd, no one bought into the message from the Republican National Convention earlier this week: That no president since Abraham Lincoln has been better for the African American community than Donald Trump.

On the contrary: One protester carried a large Biden-Harris flag in support of the Democratic candidates for president and vice president, and several had badges on their shirts and bags reading "Vote Trump out."

One speech that made the significance of this November's vote particularly clear came from Reverend Jamal Bryant from Georgia.

"On November 3, no matter what you do, we will crawl to the polls," Bryant said in a booming voice addressing the Trump administration. "If you take away the mailbox, we are still going to crawl. You take away the [polling] stations from our communities, we are still going to crawl… Even if we find ourselves paralyzed and you force us to crawl, we are like butterflies … They crawl and then they fly."

Thousands of people around the Reflecting Pool cheered, jumping up and roaring "Yes!" It felt like another historic moment at the foot of the Lincoln Memorial.

March on Washington — in pictures

Thousands of people gathered at the Lincoln Memorial in Washington D.C., where Martin Luther King Jr. had delivered the historic "I have a dream" speech 57 years ago.