The suspect was charged with fatally shooting two protesters and wounding a third during protests in Wisconsin. Among others, he faces charges of first-degree intentional homicide — the most serious crime in the state. 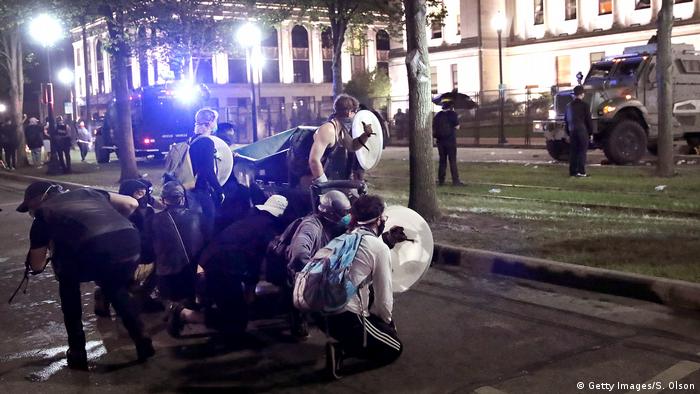 Prosecutors on Thursday charged a 17-year-old from Illinois in the fatal shooting of two protesters and injuring of a third in Kenosha, Wisconsin.

The incident took place during a night of unrest following the weekend police shooting of Jacob Blake.

If convicted of first-degree intentional homicide, he could face a mandatory life sentence.

Protests broke out in in the city of Kenosha where Jacob Blake, a Black man, was shot multiple times in the back by the police.

Nights of unrest in the midwestern city followed. During the third night, Joseph Rosenbaum, 36, of Kenosha, and Anthony Huber, 26, of Silver Lake, about 15 miles (24 kilometers) west of the city were shot and killed.

A third man, Gaige Grosskreutz aged 26, who was volunteering as a medic, was shot and injured.

A day later on Wednesday, Kyle R was taken into custody. His first hearing has been scheduled for Friday.

His defense attorney is planning to claim he was acting in self-defense. During his trial, the teenager will be treated as an adult in the criminal justice system in accordance with Wisconsin law.

Criticism of the police

Police have since faced criticism about their handling of the attack.

According to witness accounts and video footage, police appeared to let the gunman walk past them and leave the scene with a rifle over his shoulder and his hands in the air, as members of the crowd yelled for him to be arrested because he had shot people, reported news agency AP.

NBA players boycotted their games for the second straight day, while NFL teams canceled scheduled practice sessions over the police shooting of Jacob Blake. Action in the NHL, MLB and WNBA was also reportedly postponed.